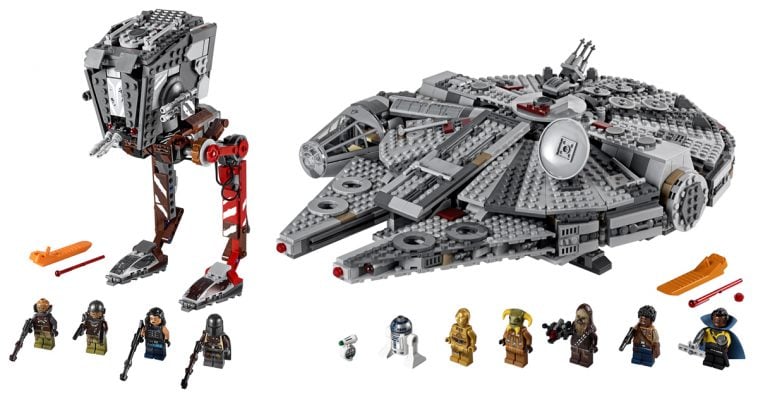 The LEGO Star Wars toy line has just gotten bigger with the announcement of new building sets inspired by the upcoming Star Wars: The Rise of Skywalker movie, The Mandalorian Disney+ series, and classic characters and scenes from the epic space opera franchise.

Part of the 20th anniversary celebration of the LEGO Star Wars range, all these sets will be available starting on Triple Force Friday, October 4th, at shop.LEGO.com, in LEGO Stores, and other toy, discount merchandise and specialty stores worldwide.

The five sets based on Star Wars: The Rise of Skywalker are the following: 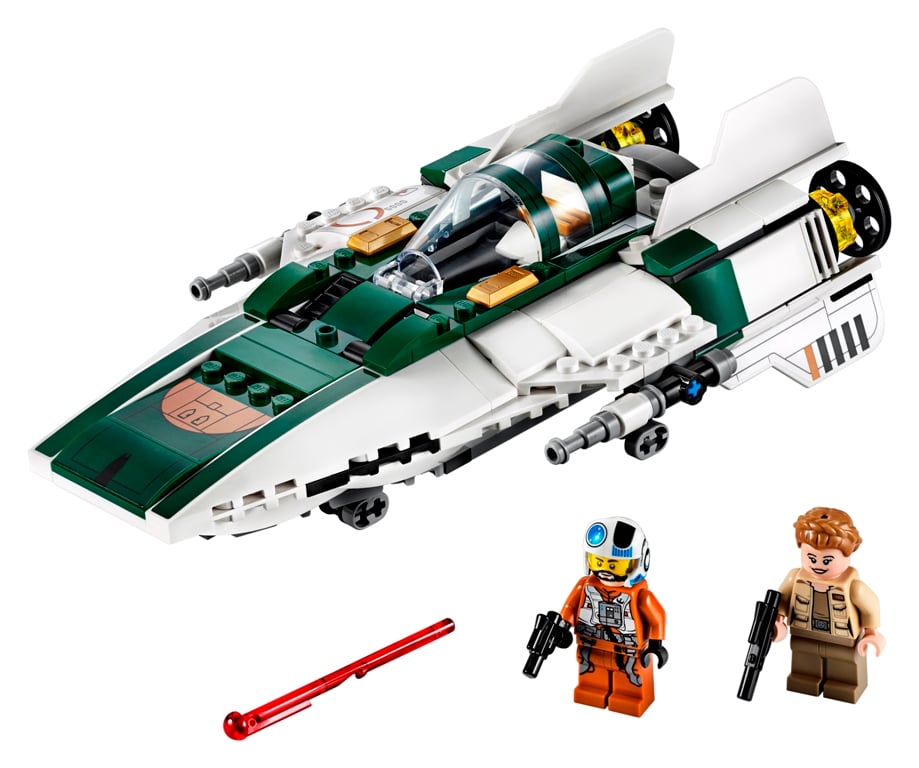 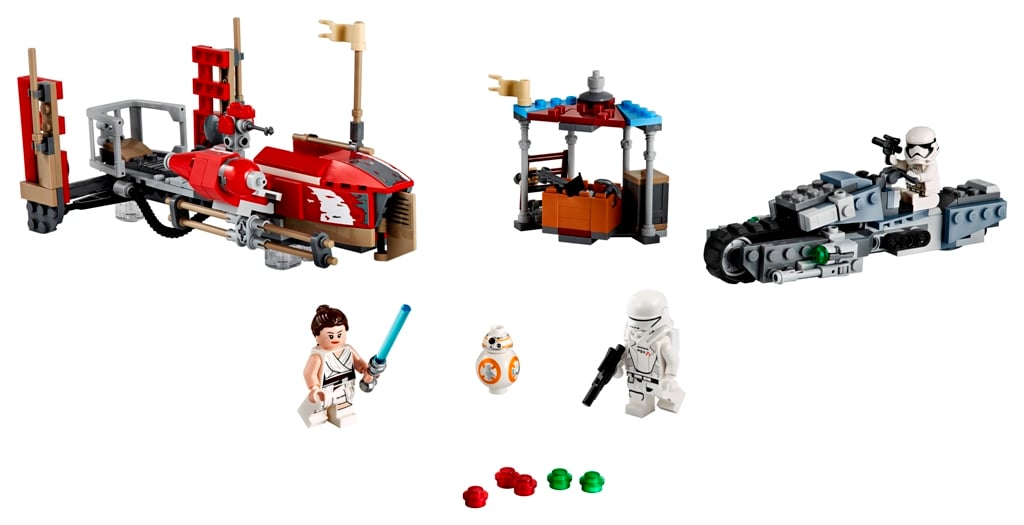 This building set consists of a transport speeder, a treadspeeder, and minifigures of Rey, a First Order jet trooper, a First Order treadspeeder driver, plus a BB-8 droid LEGO figure. The transport speeder has space for Rey and BB-8 and features a transparent stand for an authentic “hovering” look. The treadspeeder, meanwhile, has a seat for a trooper, a rubber tank track, and two side-mounted stud shooters. Included minifigure weapons are Rey’s blue Lightsaber, the treadspeeder driver’s blaster pistol, and the jet trooper’s blaster. 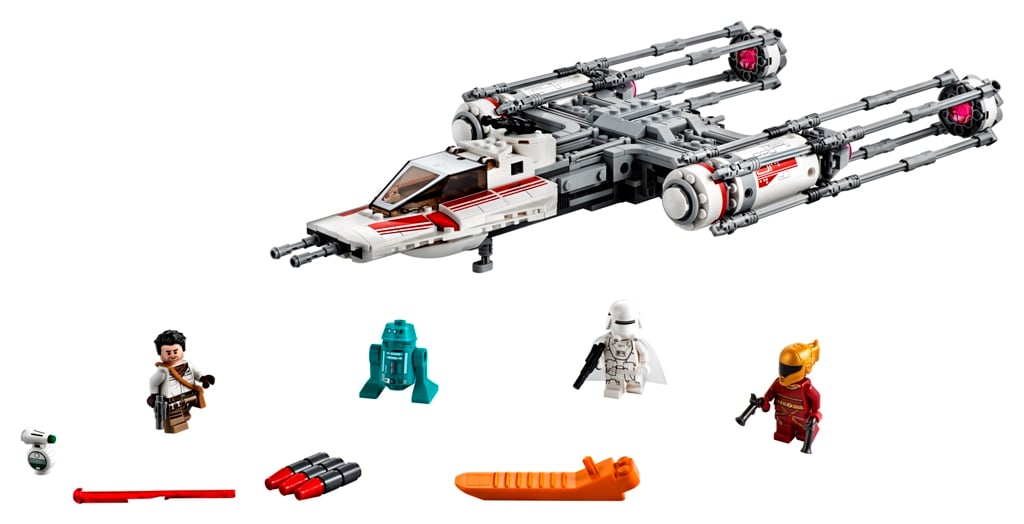 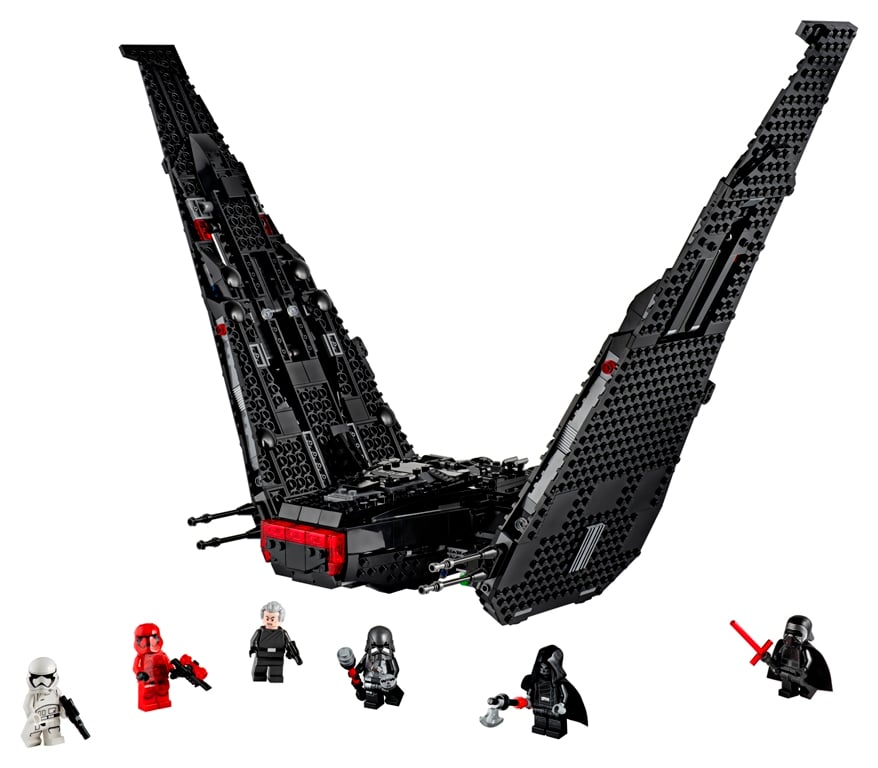 Kylo Ren’s majestic command shuttle has a rotatable right engine for folding in the wings when landing,  and the ability to shorten its wings by folding the top part down. It is also has a lowering access ramp, a three-minifigure cockpit, and two spring-loaded shooters. In addition to a Kylo Ren minifigure, the set also includes minifigures of General Pryde, a Sith trooper, a First Order stormtrooper and two Knights of Ren. Completing the kit are a number of minifigure weapons, including lightsaber, blasters, axe, and mace. 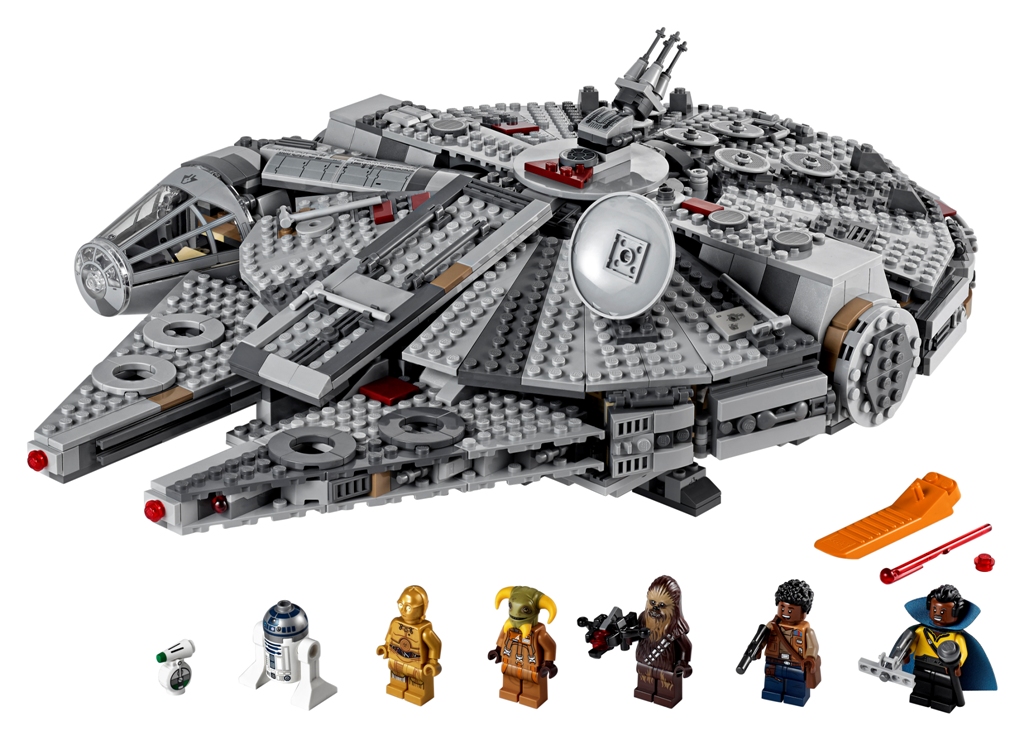 The exterior of this Millennium Falcon model features a rotating top, two spring-loaded shooters, a lowering ramp, an opening cockpit with space for two minifigures, and bottom gun turrets that fit two minifigures. Its interior, meanwhile, is furnished with a cargo area with two containers, navigation computer with rotating chair, couch and Dejarik hologame table, galley, bunk, hidden smuggling compartment, and a hyperdrive with repair tools. This replica of the iconic space vehicle also includes minifigures of Finn, Chewbacca, C-3PO, Lando Calrissian and Boolio, as well as LEGO droid figures of R2-D2 and D-O.

The LEGO Star Wars range currently has one set based on The Mandalorian web series, and it’s the: 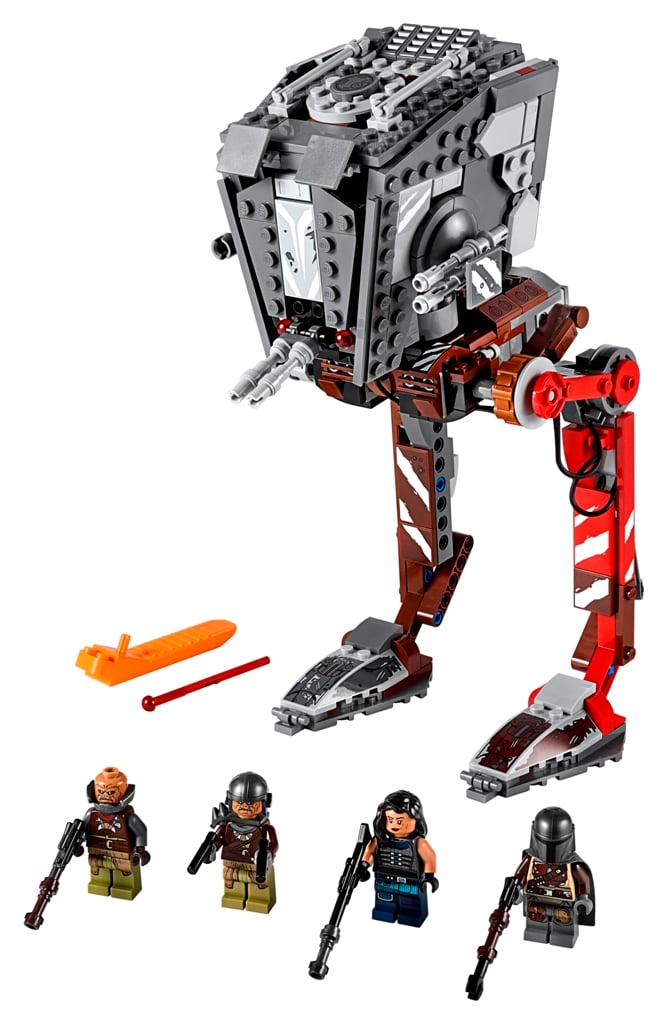 This cool brick model of the AT-ST walker has posable jointed legs, a wheel-activated turning turret, an opening canopy with space for a minifigure, and special decorated elements for a cannibalized look. The toy vehicle comes with minifigures of The Mandalorian, Cara Dune, and two Klatooinian Raider. Also included in the set are three blaster rifles and one blaster for the minifigures.

Lastly, the two new sets based on classic scenes and characters from the franchise are as follows: 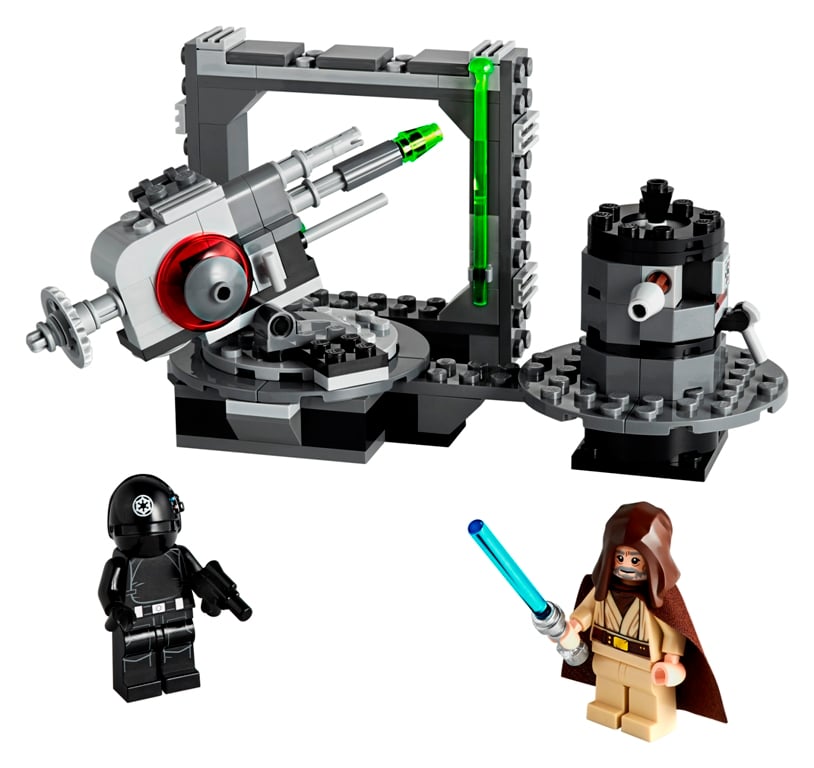 Based on a pivotal scene from the original Star Wars: A New Hope movie, this building set features a tractor beam control tower and a laser cannon with spring-loaded shooter and storage clips for missiles. With Obi-Wan Kenobi and Death Star gunner minifigures included in the set, builders must sneak the Jedi hero past the enemy and help him disable the tractor beam before he’s spotted. Also included in the set are Obi-Wan’s blue Lightsaber and the Death Star gunner’s blaster pistol. 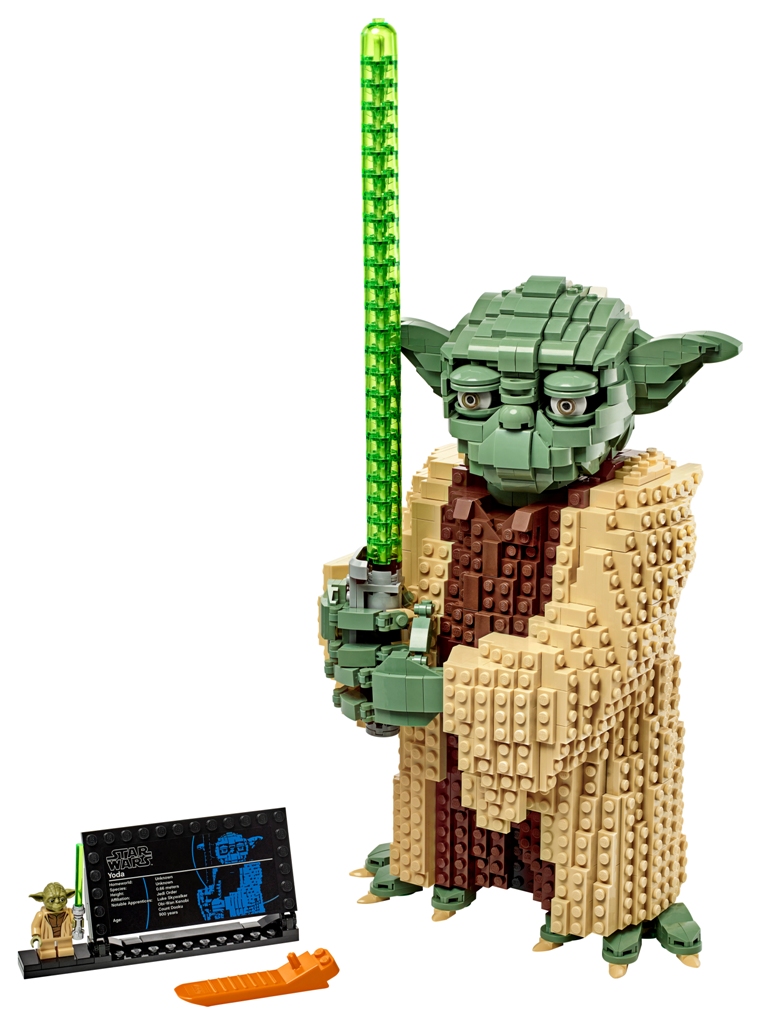 The force is strong with this buildable model of Jedi Master Yoda, which features posable head and eyebrows as well as movable fingers and toes. It includes a fact plaque with details about the iconic character and a stand for the included Yoda minifigure with a lightsaber.