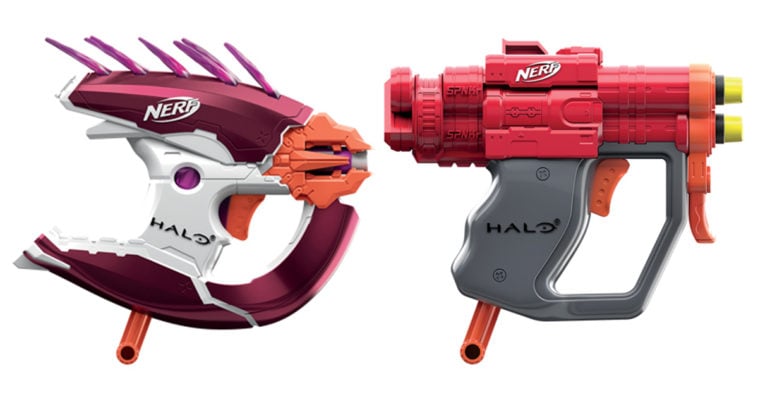 The much-awaited Halo Infinite video game is set to hit the shelves later this year, and in an effort to keep the excitement going for its upcoming release, Halo Infinite developer 343 Industries has teamed up with toy company Hasbro for a line of Nerf blasters inspired by the new video game.

Designed to look like the weapons featured in Halo Infinite, these cool and brightly colored Nerf blasters allow fans to play out battle scenes from the game. To mark the launch of the collaboration, Hasbro has unveiled the first three blasters included in the range: the Nerf Halo MA40 Blaster, Nerf Halo SPNKr MicroShot, and Nerf Halo NEEDLER MicroShot.

The Nerf Halo MA40 Blaster is a motorized, semi-automatic, clip-fed blaster that unleashes 10 darts in a row. With a price tag of $49.99, the toy weapon comes with 10 foam darts, a removable 10-dart clip, and a rail riser that attaches to the blaster’s tactical rail. The battery-operated blaster also includes a game card with a code to unlock this blaster’s color scheme in Halo Infinite.

Meanwhile, the Nerf Halo SPNKr MicroShot and Nerf Halo NEEDLER MicroShot are miniature-sized single-shot blasters inspired by iconic Halo launchers, SPNKr and The Needler. Perfect for indoor battles, these easy-to-carry blasters fire one dart at a time with hand-powered action. Both MicroShots include two foam darts and retail for $9.99 each.

All these three blasters will debut at most major retailers in the U.S. and the U.K. on October 1st, with additional markets to follow in 2021. More blasters, accessories, and retail exclusives will be added to the Halo Infinite Nerf lineup later this year.

Though Halo Infinite doesn’t have an exact release date yet, it is set to become available this coming Holiday season, alongside the next-generation Xbox gaming console, the Xbox Series X.