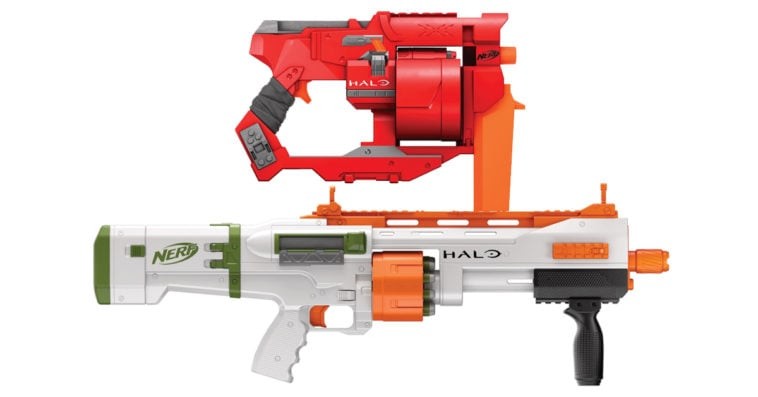 Inspired by a weapon used by the Covenant against the UNSC in the video game Halo Infinite, the Nerf Halo Mangler Dart blaster features a six-dart drum and a pull-back priming handle. Pull back the priming handle to get the blaster ready to fire, then press the trigger to blast one dart from the drum. To fire another dart, prime and press the trigger again.

The Nerf Halo Mangler Dart blaster comes with six official Nerf Elite darts and a drum cover that opens, which gives users easy access to the drum when loading darts. The blaster also includes a game card with a code that unlocks Nerf emblem and weapon charm in the Halo game.

The Nerf Halo Bulldog SG blaster, meanwhile, is based on a weapon used by the Master Chief against the alien alliance in the video game. The toy blaster fires 10 darts in a row with pump-action blasting from the rotating drum that holds up 10 Nerf Elite darts. Move the pump handle to prime the blaster, then press the trigger to fire one dart.

In addition to 10 Nerf Elite foam darts included in the toy set, the blaster also comes with flip-up sights, tactical rails, and a game card with a code that unlocks Nerf Bulldog weapon skin and charm in the Halo game.

Both blasters will be available at most major toy retailers across the U.S. on January 1st, 2021, but fans can now pre-order the Nerf Halo Mangler Dart blaster on Amazon, GameStop, and Best Buy for $19.99. The Nerf Halo Bulldog SG blaster is priced at $34.99, but it’s unclear when or whether it will be available for pre-order ahead of its official release.

Halo Infinite, the sixth main entry of the Halo series and the fourteenth game overall, was originally lined up as a launch title for the Xbox Series X/S in November, but the release of the game was delayed by Microsoft to 2021 due in part to COVID-19 and the impact of working from home.