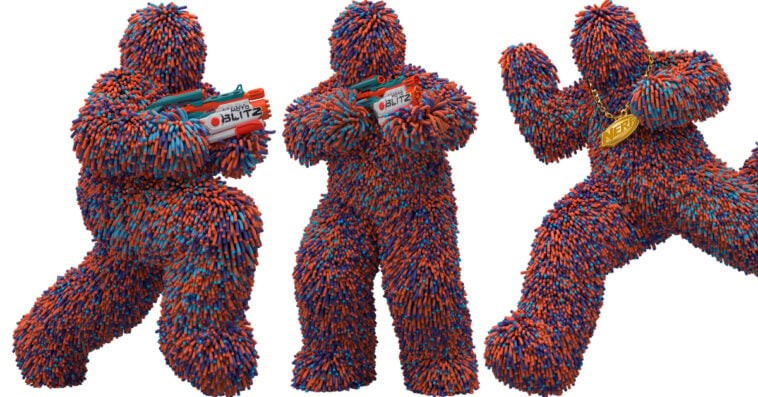 Nerf’s new mascot has been officially unveiled last Friday, and while it’s unlike any other brand mascot that people have met before, it’s something that most fans didn’t expect.

Who is Nerf’s new mascot?

Nerf’s new mascot is named Murph, an anthropomorphic character who uses the non-binary pronouns “they” and “them.” Made of Nerf darts from head to toe, Murph is the brand’s first-ever mascot and is described as “the most fun, playful, and social member of the NERF team.”

According to a press release announcing the mascot’s debut, Murph is the personification of the playful spirit. They are a natural athlete, great at NERFoop, and an expert at surprise NERF Super Soaker ambushes. They can also toss a Nerf Vortex Football like no other and are a fantastic trick shooter with any Nerf blaster.

“The launch of Murph is a testament to the success of Hasbro’s Brand Blueprint strategy and turning Nerf into the social, active play brand it is seen as today,” said Adam Kleinman, SVP & GM, Nerf, Hasbro, in a statement. “We are thrilled to introduce Murph to fans, a mascot that represents the playful spirit that lives inside us all and is unleashed through Nerf.”

Created in a partnership with the ad agency The Martin Agency, Murph is the center of the brand’s new multi-year marketing campaign Unleash the Play in You, which encourages families to step away from their screens and get up and active with Nerf to create memories that will last a lifetime. As part of the campaign, Murph is set to appear in Nerf’s commercials, retail outlets, and social media channels later this month.

What do people think of Nerf’s new mascot Murph?

A lot of fans couldn’t tell what exactly Nerf’s new mascot is after seeing Murph for the first time. Some people made fun of Murph’s look, with a number of them comparing the mascot with similar-looking pop culture characters and inanimate objects.

How DOES one describe "Murph"?

Please elaborate if you can… https://t.co/QJHQvUfwRE

murph is p bad at nerf, the point is to not get hit https://t.co/Td2OpTyZKH

Yooooo, it's so crazy seeing Murph becoming the official mascot of NERF. I still remember when we both worked at the car wash in high school. Proud of you dude. 👏 pic.twitter.com/j2HTEJPzAz

That Nerf Murph got me thinking of other creatures/animals with a similar vibe. It’s cool, it’s good. pic.twitter.com/BkHqEdqSzD

Others, meanwhile, are less concerned about Murph’s appearance and are more interested in learning about the mascot’s anatomy.

*getting escorted out of the hasbro meeting by security*
ok just one more question, so can murph reload using the darts on his own body and then regrow more so he has a never ending supply of amo?

So… is Murph the nerf mascot a guy in a Nerf dart ghillie suit, or a guy MADE or nerf darts? And if so, do they have one nerf dart that is a reproductive organ? Or are they ALL dicks… pic.twitter.com/kwlr3wppDY

Look at the different lengths…
Does it grow NERF darts like hair?

So… are the NERF darts we’ve always used are shorn from these creatures like wool?
Is Murph the NERF here, unshorn, to save his brethren from the NERF Herders? pic.twitter.com/eJvQ8gaYDR

A nerf man named Murph shoots a nerf gun. Are the bullets made of flesh? Or is he made of bullets? He screams, for he does not know. pic.twitter.com/jDzGYM3UcN

Despite Murph’s unusual look and the many mysteries surrounding their structure, a few fans love Nerf’s new mascot for what they are.

I actually love Murph the Nerf Monster with all my heart

NERF has introduced their new mascot, “Murph,” a big weird featureless terrifying gun-toting bigfoot thing made of foam darts who yearns to “unleash the play in you.” Murph is a fuckin nightmare and I love him, thank you NERF Brand for this floppy affront to God. https://t.co/CehbV4lZry pic.twitter.com/XYjOKykkNu

nerf revealed murph today. i love them. (nerf said they use they/them) pic.twitter.com/I49BJuSgA6