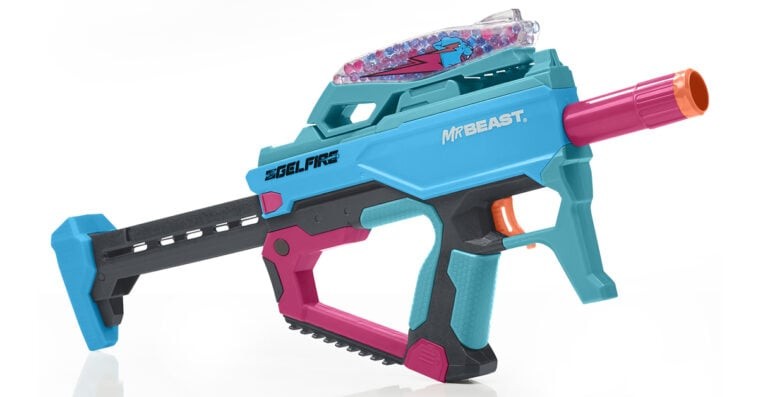 Hasbro has collaborated with American YouTube personality MrBeast for its newest Nerf blaster.

Called The Nerf Pro Gelfire x MrBeast, the blaster was officially unveiled by MrBeast himself in his 100 Kids Vs 100 Adults for $500,000 YouTube vlog, which premiered last Saturday, December 3rd.

In the latter half of the video, MrBeast raved about the Nerf Pro Gelfire Mythic Blaster launched in July 2022. “It shoots gel pellets,” he said of the relatively new Nerf blaster as he tried playing with it with some of his friends. “I wish we had things like this when we were kids. These are crazy. So crazy in fact, that I asked them if I could make my own.”

Apparently, as part of his partnership with Hasbro announced last October, MrBeast was able to make his own version of the Nerf Pro Gelfire Mythic Blaster. And as first seen in his vlog, the Nerf Pro Gelfire x MrBeast features the YouTuber’s iconic light blue and pink colors as well as his moniker. 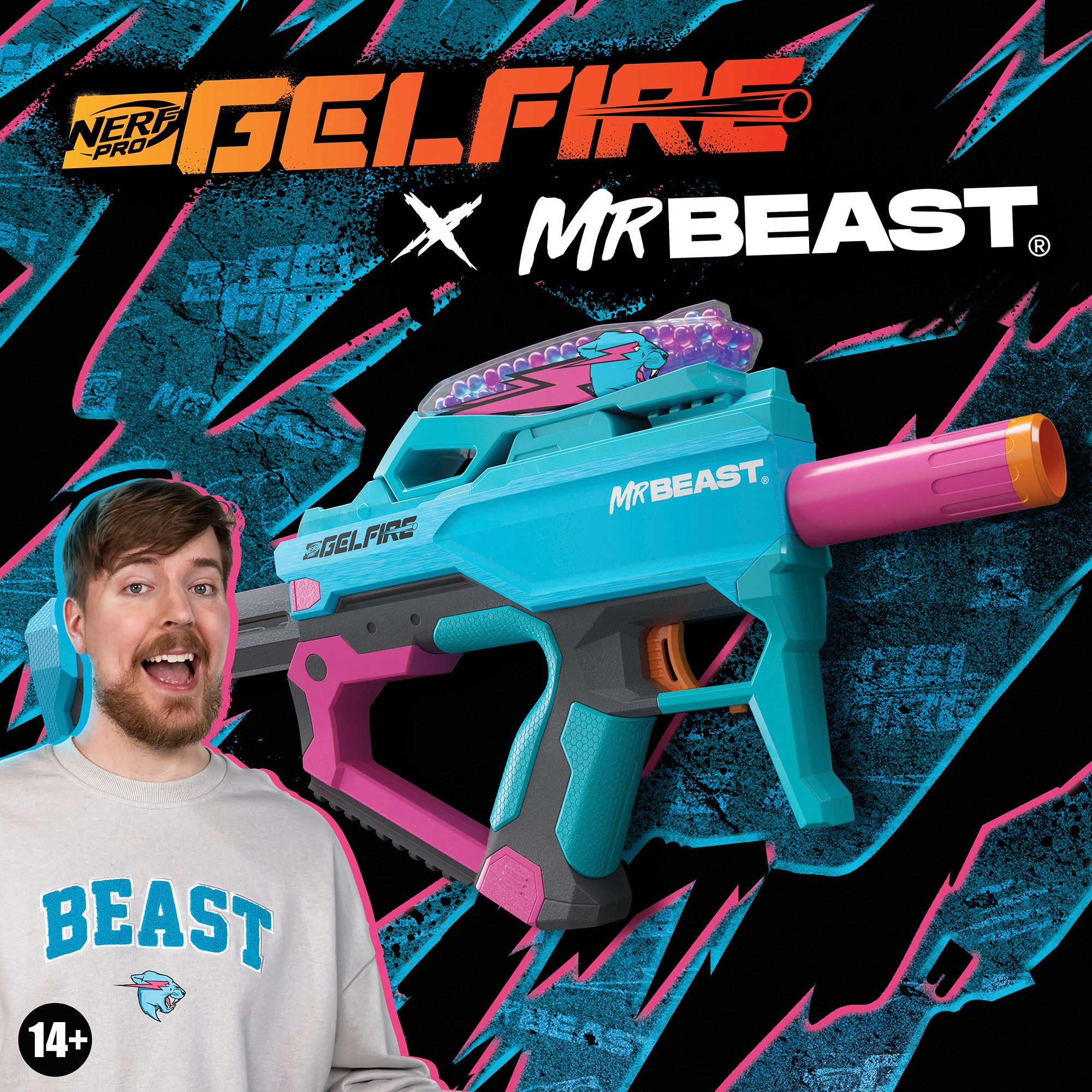 “The hopper on ours is smoother,” MrBeast said of his own Nerf blaster in his vlog when comparing it to the Nerf Pro Gelfire Mythic Blaster. “It has retractable stock, rechargeable batteries, and you can put it on semi-fire, which shoots one at a time or full auto. And this cartridge can hold tons of blasts.” 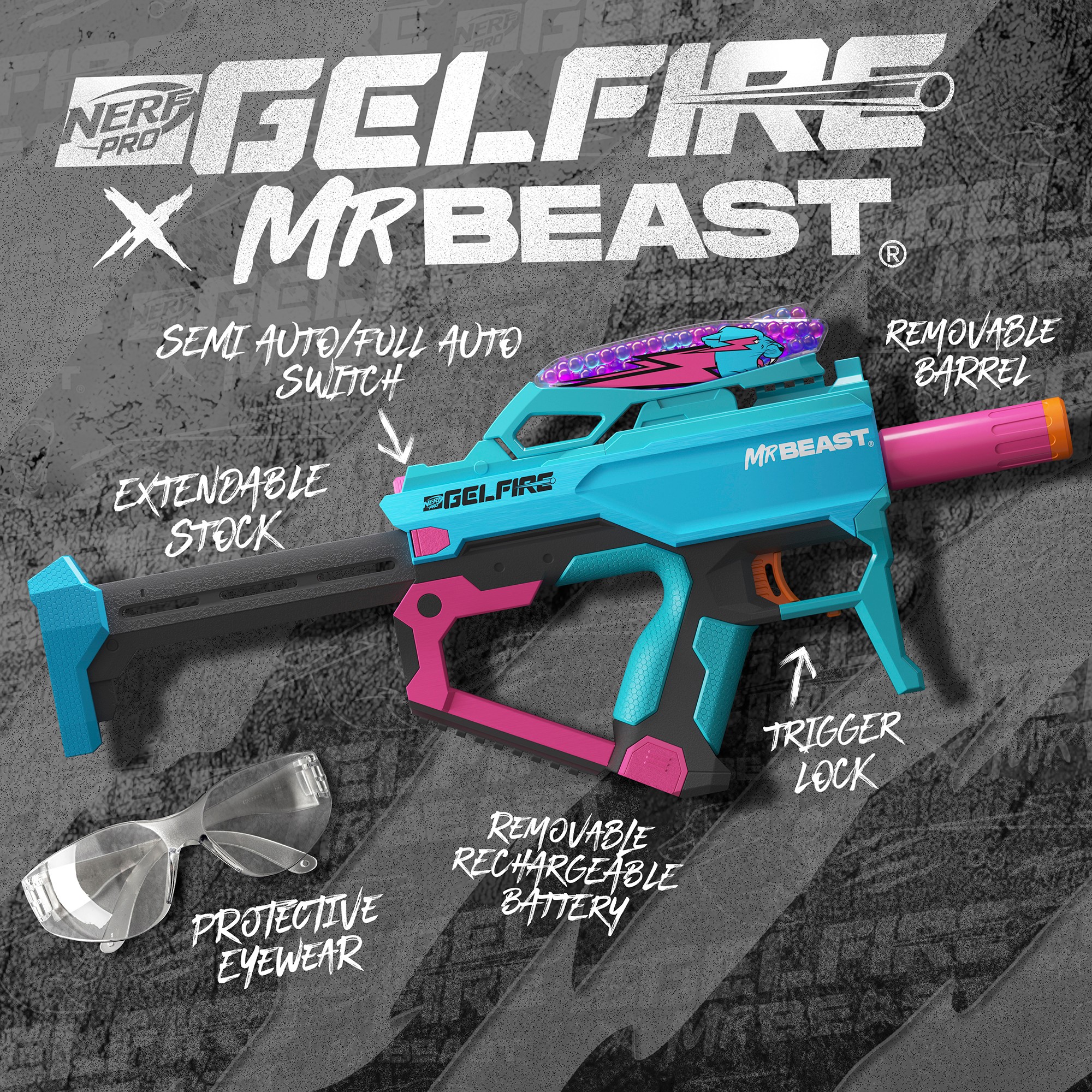 Aside from having full- and semi-auto modes, the Nerf Pro Gelfire x MrBeast is equipped with a 300-capacity hopper, a removable barrel, and an extendable stock. It also comes with a pair of protective eyewear, an easy slide-in slide-out rechargeable battery, a universal USB-A to USB-C charging cable, and 20,000 dehydrated Nerf Pro Gelfire soft super absorbent polymer projectiles.

Table of Contents show
Where to buy the Nerf Pro Gelfire x MrBeast
Who’s MrBeast?
How many MrBeast channels are there?
When is MrBeast’s birthday?
Where is MrBeast from?
How much does MrBeast make a month?

Where to buy the Nerf Pro Gelfire x MrBeast

For ages 14 and up, the Nerf Pro Gelfire x MrBeast is now available for preorder at Hasbro Pulse, Target, Walmart, and Amazon for $69 each. MrBeast, whose real name is Jimmy Donaldson, is an American conten creator credited with pioneering a genre of YouTube videos that centers on expensive stunts. His main YouTube channel, “MrBeast” currently has 115 million subscribers. It is the fourth-most-subscribed channel on the online video-sharing site, and the highest channel by any individual.

How many MrBeast channels are there?

When is MrBeast’s birthday?

Where is MrBeast from?

Though born in the state of Kansas, MrBeast was raised alongside his older brother and fellow YouTuber Charles “C.J.” Donaldson in Greenville, North Carolina. In 2016, MrBeast graduated from the private secondary school Greenville Christian Academy. He briefly attended East Carolina University before ultimately dropping out.

How much does MrBeast make a month?

While it’s unclear how much money does MrBeast make every month, Forbes named him as the No. 1 highest-paid YouTube star in January 2022. According to the business magazine’s report, MrBeast earned $54 million in 2021—the most of any YouTuber ever—as his videos accumulated 10 billion views, doubling from 2020.