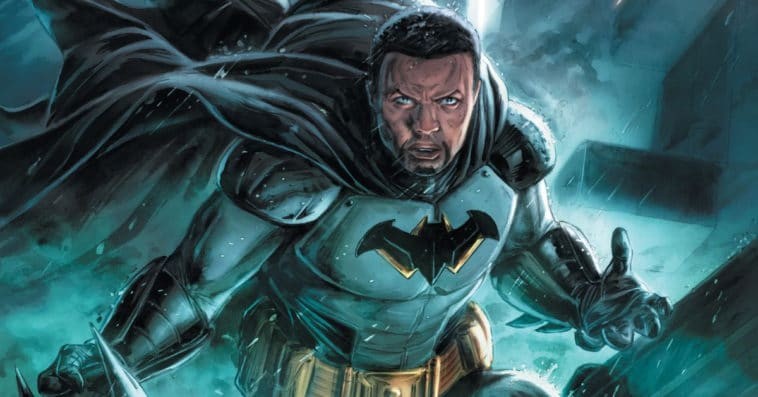 DC Comics has named its new Batman and he’s someone that has originally debuted on the page 40 years ago.

DC Comics announced on Thursday that Tim Fox will take on the mantle of the Caped Crusader in the upcoming four-issue comic book series, Future State: The Next Batman by John Ridley, Nick Derington and Laura Braga. The big news was revealed alongside the release of a new variant cover for Future State: The Next Batman #2 created by artists Doug Braithwaite and Diego Rodriguez.

“In this future, Gotham City is controlled by the Magistrate,” DC said of its Future State Batman titles. “This villainous regime has taken control of the city, now under constant surveillance. All masked vigilantes have been outlawed and Batman has been killed. But led by an all-new Batman, a new assembly of Gotham’s guardians rise to give hope to all of those who lost it!”

Set to become the first Black Batman in the history of the iconic DC character, Tim is the estranged son of Lucius Fox and brother to the former Batwing Luke Fox. Created by Len Wein and Irv Novick, Tim first appeared in April 1979’s Batman #313, in which he was established as a young man who wasn’t exactly a huge fan of his father.

After not appearing in the comics for about four decades, Tim has since been teased in the current Batman line, first as a mention in Family Ties ― the John Ridley/Olivier Coipel story from September’s Batman: The Joker War Zone anthology that revealed how the Fox family reacted when Catwoman gave them nearly all of Bruce Wayne’s fortune.

Tim also appeared in October’s Batman #101. He showed up in a conversation between Batman and Lucius Fox, who has since acquired the Wayne fortune and technology as a result of The Joker War.

Future State: The Next Batman is part of DC Future State, a two-month event that imagines a potential future of the DC Universe. Other comic book titles that are part of the event will see Superman’s son Jonathan Kent becoming the Man of Steel; Brazilian character Yara Flor becoming Wonder Woman; and more.

Future State: The Next Batman will hit comic book stores and participating digital platforms on Tuesday, January 5th, 2021, with new issues available every other week (issue #2 on January 26th, issue #3 on February 2nd, and issue #4 on February 16th). Each 64-page oversized issue includes backup stories of other Gotham City heroes and villains taking on the oppressive rule of The Magistrate and its war on vigilantes.

After Future State: The Next Batman ends, fans can catch Tim in Ridley and Coipel’s Batman: Black & White anthology series (February 23rd 2021), in which the character will be given a sidekick.