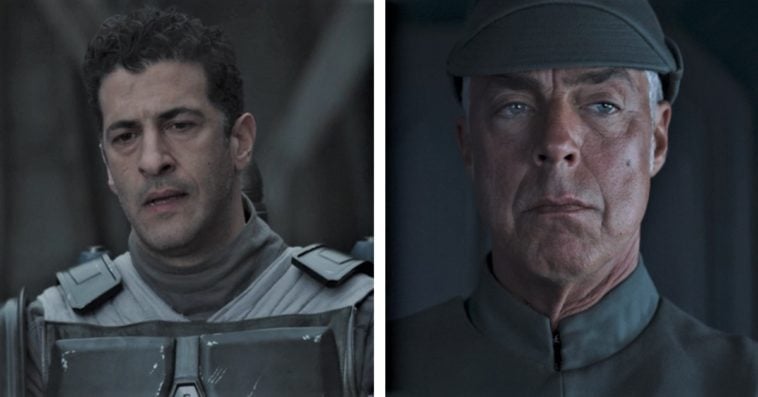 Fans of Marvel’s Agents of SHIELD were pleasantly surprised when two of the show’s cast members made an appearance in the latest episode of Disney+’s The Mandalorian.

Simon Kassianides, who played Sunil Bakshi in 12 episodes of the ABC series, guest-starred as Axe Woves in the Star Wars spinoff’s season 2, episode 3, titled The Heiress. At the beginning of the episode, Axe ― along with his fellow Mandalorians Bo-Katan Kryze (Katee Sackhoff) and Koska Reeves (Sasha Banks) ― rescued Din Djarin (Pedro Pascal) and The Child from a Quarren ship. The trio then managed to convince Mando to help them raid an Imperial Gozanti-class cruiser in exchange for information on the whereabouts of the former Jedi Ahsoka Tano.

In a lengthy post on Instagram shortly after the episode arrived on Disney+, Kassianides shared that being cast as a Mandalorian was a dream come true for him. “As a young boy I played with original Star Wars figures passed along to me (or loaned to me more like) by my older brother. My favorite was the Mandalorian figure of Boba Fett,” wrote the British actor, who went on to admit that he got emotional when he finally found out the character he’s going to portray.

“I entered the costume department some days after winning the role, unaware of what kind of character I’d be playing,” Kassianides recalled. “Eventually on that day, an instantly recognizable, career-defining Mandalorian helmet was revealed to me. I was told it wasn’t uncommon for grown men to become tearful when seeing items evocative of their entire childhood come to life in their hands, and I was no different. I can say nothing here that would do justice to the magnitude of this moment for me.”

The other Agents of SHIELD alum that appeared in the latest episode of The Mandalorian was Titus Welliver. The actor, who played Felix Blake in three episodes of the Marvel Cinematic Universe series, guest-starred as the captain of the aforementioned Imperial Gozanti-class cruiser.

While Welliver didn’t share much about his experience on his first appearance in the Star Wars franchise, he did tweet that he “had such a great time working” with the episode director, Bryce Dallas Howard, whom he called a “marvelous maestro.”

I had such a grand time working with you! Bravo,it’s a great episode and you are a marvelous maestro!

Though Welliver’s character died at the end of the episode, Kassianides’ Axe may likely re-appear in future episodes of The Mandalorian, as he, Bo-Katan, and Koska were all alive and well when the episode concluded. Also, Bo-Katan offered Mando a place among them despite the differences in their creeds. Though Mando declined, Bo-Katan told him that her offer stood if he ever changed his mind.

New episodes of The Mandalorian season 2 arrives on Disney+ every Friday.