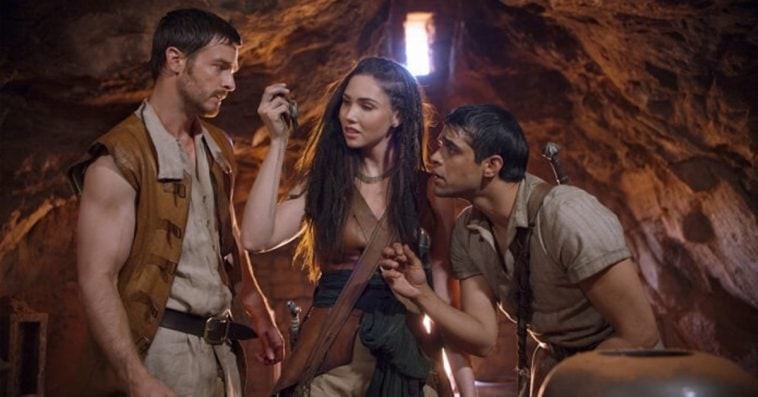 Update (June 8th, 2020): After production on season 3 of The Outpost was shut down in March 2020 due to the COVID-19 pandemic, the new season is now set to premiere this fall.

“We are excited to be one of the first productions to resume after the TV and film industry was put on pause,” executive producer Dean Devlin said in a statement. “Balkanic Media has gone above and beyond to ensure everyone’s safety on-set, and we are happy that the third season of The Outpost will be completed and ready to premiere Fall 2020.”

To ensure the safety of the cast and crew during filming, The Outpost has recruited Dr. Branka Matijasevic, the head of Policlinic Eterna Medical System in Belgrade ― the capital city of Serbia where the show shoots.

“After examining the content of the post-isolation plan for the continuation of production of The Outpost season 3, I can state that the plan meets the requirements of all standards in COVID-19 prevention prescribed by the Institute of Public Health of Serbia,” Dr. Matijasevic said. “As one of the essential measures I propose daily physical examinations for the cast, conducted upon arrival to the studio and consisting of the following procedures: auscultation of lungs and heart, ECG, tension measurement, saturation measurement and check for febrile. Results would be filed and kept. Crew members would be examined weekly, one pod at a time, following the same procedure as the cast. Each member of cast and crew will have a medical file with records of all examinations, and it would be accessible for review per request.”

Original Story (October 15th, 2019): The fantasy-adventure drama has been renewed by The CW for season 3, which is set to premiere in the summer of 2020. Though the exact episode order is unclear, it’s likely that the new season will also have 13 episodes just like the show’s sophomore run.

The renewal announcement, which was revealed by MIPCOM, came almost three weeks after the show’s Season 2 finale aired on September 26th. Though the show’s sophomore run saw a decline in ratings, it appears that its viewership figures are still okay for a summer series. The Outpost season 2 averaged 0.13 in the 18-49 demo, down 7.69 percent from season 1, and 590,000 total viewers, down 6.09 percent versus season 1.

Created by Kynan Griffin and Jason Faller, The Outpost centers on Talon (Jessica Green), the lone survivor of a race called the Blackbloods. Years after her entire village is destroyed by a gang of brutal mercenaries, Talon travels to a lawless fortress on the edge of the civilized world, as she tracks the killers of her family. On her journey to this outpost, Talon discovers she possesses a mysterious supernatural power that she must learn to control in order to save herself and defend the world against a fanatical religious dictator.