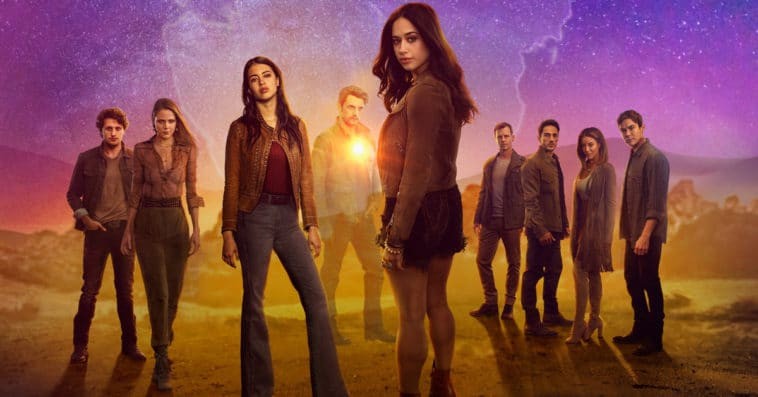 The season 2 finale of Roswell, New Mexico is set to air next Monday, and if it happens to end with a huge cliffhanger, fans have nothing to worry about, as season 3 of the sci-fi drama has already been greenlit.

The CW handed out a third-season renewal to Roswell, New Mexico back in January. Though the exact episode order is not clear, it’s likely that the new season will have 13 episodes just like the show’s first two seasons.

Production on the new season was supposed to start in July, but given the ongoing COVID-19 situation, filming has been postponed indefinitely. The writers, however, are already hard at work, and have been brainstorming of creative ways to keep the actors socially distanced from one another once filming starts.

During a virtual panel at ATX TV Festival last Friday, showrunner Carina MacKenzie shared that there’s a point when the writers had actually wondered how they could potentially prevent the show’s couples from kissing for an entire season.

“Trying to figure out how to tell a love story without any kissing has been fun,” MacKenzie said. “We had a writer pitch, ‘Well, what if the aliens are getting stronger, and now every time they touch anyone that person comes away with an alien handprint on them?’ We were like, OK, maybe that’s how we prevent these two people from kissing for an entire season is he can’t touch her because she’ll start to glow.”

To avoid any confusion, MacKenzie took to Twitter on Monday to point out that the said writer pitch is just a potential scenario. “I was using this as an example of hypothetical creative solutions we’ve been pitching for hypothetical COVID-related problems,” the writer explained.

What’s for sure, however, is that the COVID-19 pandemic will be acknowledged in the series. “Our two main sets are a diner and a bar that are constantly packed with extras. We’re sort of like, OK, well we can probably have extras in exterior scenes socially distanced, but we’re not going to be able to pack a bar full of people,” MacKenzie said at the virtual panel. “[So] we’ll do a little time jump between our seasons and we will jump over the quarantine period, but we will still acknowledge COVID happened. Our diner will be take-out only. Our bar will have shut down because they couldn’t sustain through the quarantine.”

Season 3 of Roswell, New Mexico has no exact release date yet, but most of The CW series are scheduled to return to the small screen in January 2021.