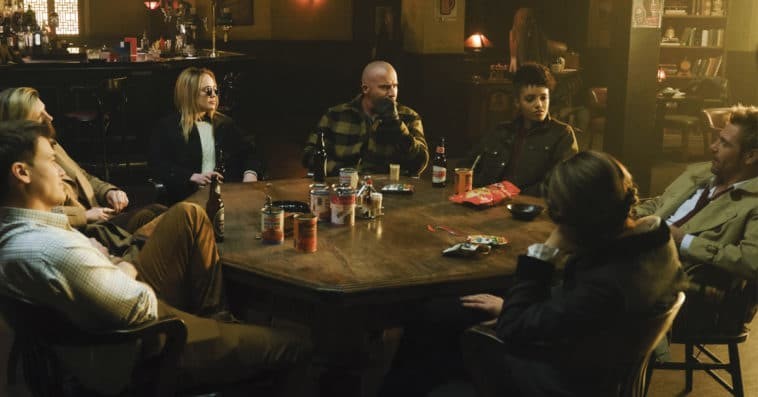 Legends of Tomorrow aired its season 5 finale last week, and if you’re wondering whether or not the time-travel show is coming back for season 6, then we’re happy to inform you that the series is set to return to The CW in 2021.

The network handed out a sixth-season renewal to Legends of Tomorrow back in January ― two weeks before it officially kicked off its fifth season. Like season 5, season 6 will be broadcast in midseason 2021. But since The CW won’t be launching new episodes until January 2021 due to production delays brought about by the ongoing COVID-19 pandemic, the new season of Legends of Tomorrow won’t premiere until sometime in summer 2021.

According to the synopsis for season 6, the Legends will find themselves protecting the timeline from space aliens that are apparently behind Sara Lance’s (Caity Lotz) abduction at the end of season 5.

Details about these space aliens are limited, but as far as how they would look like, showrunner Phil Klemmer told TV Insider said that their physical appearance will likely be inspired by extraterrestrial characters featured in “the B-movies of the ‘70s and ‘80s like They Live and Mars Attacks.” “I want to do trashy genre in a classy way,” said the executive producer, before revealing that the Legends’ new enemies will be “pretty gnarly… [and] could be, by and large, irredeemable.”

When asked how long Sara will be in alien custody, Klemmer revealed that the Waverider’s co-captain will be separated from the team at the start of the new season. “Obviously [we] don’t want Sara to be returned [immediately], we want to live with the consequences of this and follow her independently of the team for a while,” said Klemmer, before revealing their plans of getting Sara back into her iconic White Canary costume more often. “We want to return Caity to her full-fledged super heroine action hero status next season,” he said.

The Waverider crew will also be welcoming a new Legend in season 6. Based on the synopsis, this new recruit is a “woman who was abducted by aliens when she was a child and supposedly imbued with powers that will help the team defeat their intergalactic foes.”

Fans can also expect to see more of Zari (Tala Ashe) and Behrad Tarazi’s (Shayan Sobhian) sibling relationship in season 6, as the recently concluded season didn’t feature a lot of that. “We really didn’t get to explore much of the Behrad-Zari 2.0 brother-sister relationship,” Klemmer said in a separate interview with Entertainment Weekly. “In the beginning, it was a little contentious and then Zari 2.0 kind of worked her way into the Legends’ hearts, but then Behrad died. They haven’t really existed in that bro-sis [place]; like, I want some bickering siblings on this show. That was the promise of bringing Behrad onto the show. … I just want to get them to that neutral space and see how they deal with sharing a totem. You know, figure out what version of Wonder Twin powers are.”