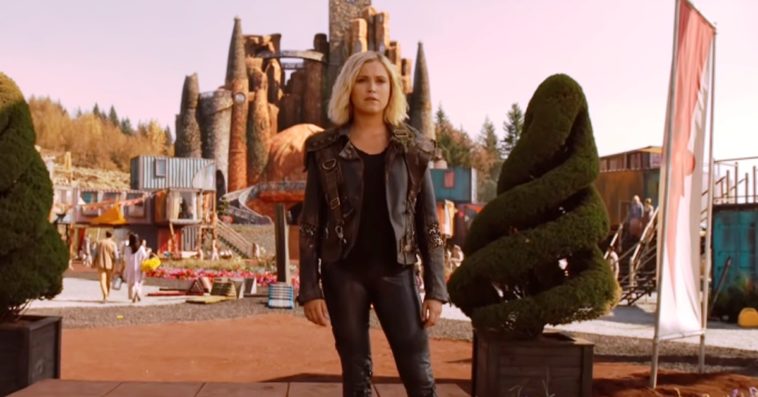 Eliza Taylor as Clarke in Season 6 of The 100

The CW has finally dropped the trailer for the highly anticipated Season 6 of The 100. Luckily for eager fans, the four-minute clip is packed with several details about the Book 2 of the post-apocalyptic sci-fi drama.

The trailer starts with the same voiceover that ended Season 5: the late Monty (Christopher Larkin) telling Clarke (Eliza Taylor) and Bellamy (Bob Morley) about the new world he found for them, and hoping that they can do better there. That new world appears to be called Sanctum, which is ruled by a man named Russell (JR Bourne).

Based on the trailer, Sanctum seems to consist of a medieval castle, shipping containers, and lots of cute happy children playing around. But since this is The 100, there’s obviously something sinister behind the kingdom’s fairytale-like façade.

Later in the trailer, Sanctum’s two suns eclipse, causing psychosis to our heroes. The phenomenon makes Bellamy, Jackson (Sachin Sahel), Emori (Luisa D’Oliveira ), Echo (Tasha Teles), and others turn against their loved ones.

Prior to the eclipse, Russell seemingly invites Clarke and her gang to stay on the planet. But following the eclipse, the leader of Sanctum changes his mind. “These people are dangerous. They’ll burn this world down, just like their last one,” Russell tells Clarke of her companions. When Clarke insists that she and her team can change, Russell replies, “I believe you want to, Clarke. I just don’t believe you can.”

Interestingly, there’s also a group of new characters living outside Sanctum’s main city. To probably protect their identities, these people are wearing masks and goggles. But at some point in the trailer, one of its members takes off the cover of his face and points his gun to the pair of characters chasing him. “The harder you fight, the faster you die,” the mysterious man says. While the guy’s identity is intriguing, the bigger question is why they are fighting at all.

On the relationship side of things, Bellamy and Raven (Lindsey Morgan) appear to have had enough of Clarke’s bad decisions and apologies, suggesting that the new season will largely focus on Clarke healing her own wounds and her relationships with others.

The trailer also teases some Blake family drama. In the Season 5 finale, Bellamy said that only a part of him wished a part of her sister Octavia (Marie Avgeropoulos) was dead. But in the trailer, after Octavia admits that she’s a monster and begs Bellamy to say that she’s still his sister, Bellamy gives one of the heartbreaking responses ever:  “My sister died a long time ago.”

Though the trailer answers several questions about Book 2, the promo video also poses brand new questions about the next chapter of The 100. Hopefully, these questions will get answered as soon as the show’s Season 6 premieres on April 30th at 9 p.m. ET on The CW.