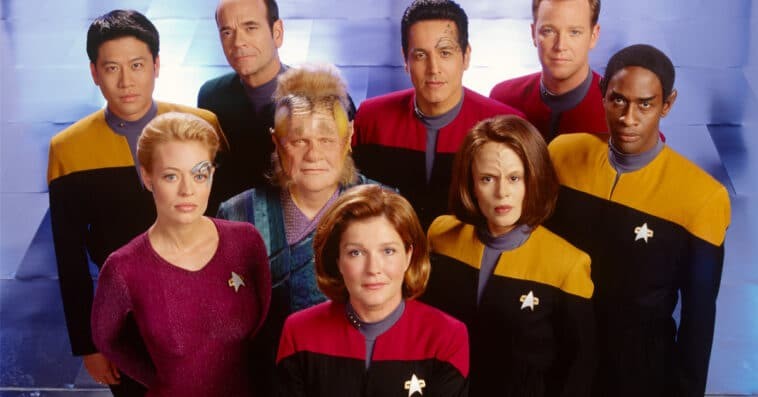 Six months before Star Trek: Prodigy debuted on Paramount+, it was revealed that actress Kate Mulgrew would play a hologram version of her Star Trek: Voyager character Kathryn Janeway in the animated sci-fi series. No one had previously mentioned that Mulgrew would also play the true Janeway in the show, so a lot of fans were surprised when the real character appeared in last Thursday’s episode.

In the final scene of A Moral Star, Part 2, the true Janeway was introduced as a vice-admiral, who is now in command of the USS Dauntless. As Star Trek: Voyager fans may remember, the USS Dauntless was the fake ship designed to trap the USS Voyager crew for Borg assimilation during their trek home from the Delta Quadrant.

The USS Dauntless was an enticing trap for the USS Voyager crew, as it was equipped with a slipstream warp drive that had the ability to shave years off of the crew’s journey home. Apparently, the Starfleet constructed an actual USS Dauntless and assigned the real Janeway as the starship’s commanding officer.

The true Janeway is currently using the USS Dauntless to locate the USS Protostar. At the beginning of the Star Trek: Prodigy, The Diviner (John Noble) and his deadly robotic enforcer Drednok (Jimmi Simpson) were desperately looking for the USS Protostar, but it was Dal (Brett Gray) who found it hidden on the Tars Lamora prison colony.

Dal and other Tars Lamora prisoners used the ship to escape and have since been heading towards Federation space. They, however, have no idea that the Diviner programmed a trojan horse program into the USS Protostar’s systems, which will spread throughout Starfleet’s computers when the USS Protostar interfaces with another Starfleet ship.

Eagle-eyed fans also noticed that the real Janeway was wearing a combadge identical to the one worn by Admiral Riker in the alternate future of Star Trek: The Next Generation series finale, All Good Things… However, the uniforms of the USS Dauntless crew are seemingly based on the outfits seen in Star Trek: Lower Decks, which takes place a few years earlier than Star Trek: Prodigy in the Star Trek timeline. The uniforms of the USS Dauntless crew were also different from the ensemble worn by the young members of the USS Protostar.

When will Star Trek: Prodigy return?

The 10-episode second half of Star Trek: Prodigy doesn’t have a release date yet, but it was announced last month that it will be available on Paramount+ later this year. The show has also been renewed by the ViacomCBS-owned streamer for a 20-episode season 2 last November, so the adventure of the USS Protostar crew is far from over.