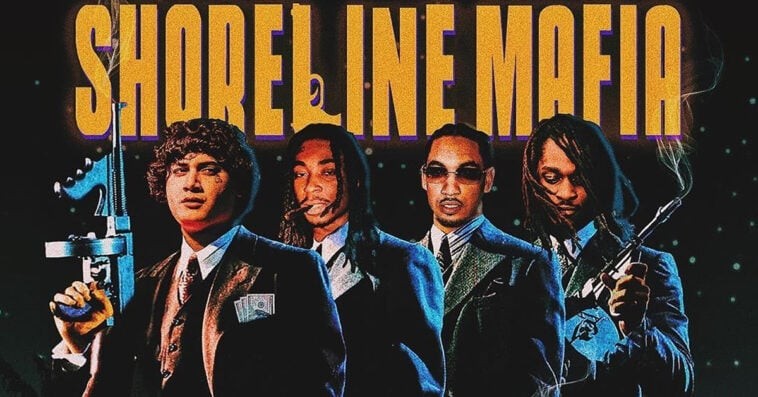 If you’re a huge hip hop fan, then you have probably heard of the group Shoreline Mafia. Officially formed in 2016, the group was composed of four members: OhGeesy (Alejandro Coranza), Rob Vicious (Robert Maggee), Fenix Flexin (Fenix Rypinski), and Master Kato (Malik Carson). Though the group disbanded in 2020, it is believed the members still receive earnings from the music they made in the past. So how much is Shoreline Mafia net worth a couple of years after they went their separate ways?

What is Shoreline Mafia net worth?

According to Worthpedia.com, Shoreline Mafia net worth is estimated at $2 million in 2022. This figure, however, is debatable, as it doesn’t sum up the values of the current net worth of the group’s individual members.

A portion of Shoreline Mafia net worth comes from the group’s earnings from their album sales, royalties from music streaming services, live performances, and collaborations with other artists. The group also earns from ad revenues on YouTube, where they have over 1.17 million followers.

Shoreline Mafia net worth was also boosted by the sales of the group’s official merchandise, which included long-sleeved shirts, sweatshirts, and hoodies, among many others.

How did Shoreline Mafia get famous?

In 2014, Rob Vicious and Master Kato joined the duo, and the quartet released a string of singles and collaborations over the next few years. Among those tracks, the most popular were Like Me, Xanpagne, Hunned Pac, and Boofd Out. Despite recording songs and performing at shows, the group didn’t have an official name until 2016, when they baptized themselves as Shoreline Mafia.

Shoreline Mafia gained nationwide attention in 2017 when they independently released their first full-length mixtape, ShoreLineDoThatShit, which includes standout tracks like Musty, Nun Major, Spaceship, Whass the Deal, and Serve a Boat. All these songs became hits on SoundCloud, Spotify, and Apple Music.

In the spring of 2018, Shoreline Mafia headlined their Only The Xclusives tour. Later that year, the group signed a deal with Atlantic Records, which re-released the group’s ShoreLineDoThatShit and dropped a new music video for the song Musty. Still in 2018, the group also embarked on their Still OTX tour, which included stops at the Rolling Loud Festival in Miami and at the Billboard Hot 100 Music Festival in New York.

Shoreline Mafia also released a 4-track EP titled Party Pack in 2018. Three of the EP’s tracks – Pop Up, Foreign, and Bussin – received more than 3 million plays across different music streaming platforms, while the EP’s Boot It Up song reached almost 10 million in just a short period of time.

Though the group seemed to be on a roll since 2018, their fans were shocked when Fenix Flexin announced in April 2020 that he would be leaving Shoreline Mafia after the June 2020 release of their debut album, Mafia Bidness. Apparently, Fenix Flexin’s departure from the group ultimately led to its total disbandment.

Got nun but love for my niggas Nd what we’ve accomplished but this new album will be my last with shoreline as a group . Moving foward w my individual career Nd visions for myself Nd where I wanna be ‼️✌🏽🖤

Is Shoreline Mafia still together?

As previously mentioned, Shoreline Mafia is no longer operating as a group. But all its four members are still active in the music industry.

In an interview with No Jumper in July 2020, Fenix Flexin said he left the group because he felt like he was being left out of a lot of important decisions surrounding the group’s future and that he needed “stuff to happen more consistently and fast.”

“I always put the group first, but it’s so easy for a group to fall apart if not everybody is on the same page and are working towards the same thing,” Fenix Flexin said at the time.

In a separate interview with No Jumper in August 2020, OhGeesy said that creative differences caused the Shoreline Mafia to disband.

“Four different people mean four different visions. It’s nothing personal… we all have our own vision and we are all going in our own way,” he said at the time, before adding that fatherhood changed him, explaining that he now prefers to “play it safe” than to take risks.

Who is the owner of Shoreline Mafia?

This explains why OhGeesy still sells Shoreline Mafia merchandise and why the group’s social media accounts are being used to promote his solo projects.