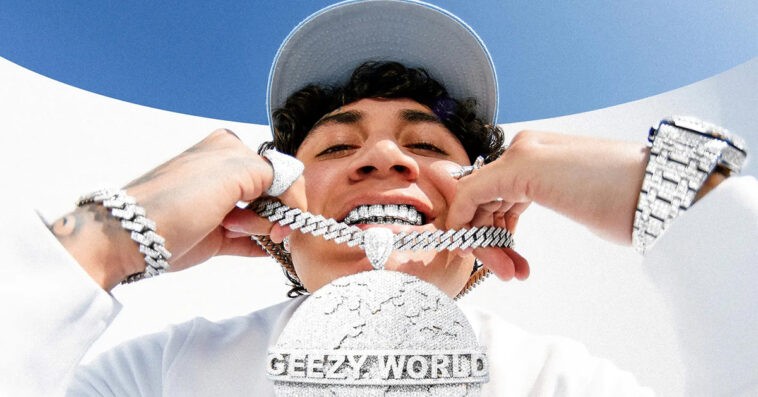 OhGeesy is an American rapper who rose to prominence as one of the founding members of the hip-hop group Shoreline Mafia. Though the group disbanded a couple of years ago, OhGeesy managed to continue his music career as a solo artist. Curious about how much money he now makes? Read on to find out what OhGeesy net worth is and how he’s been doing ever since he went solo.

How much is OhGeesy net worth?

According to several websites, OhGeesy net worth is estimated at $3 million. Below is a rundown of how OhGeesy makes money.

A huge chunk of OhGeesy net worth comes from his earnings as a rapper. These include the money he gets from album sales, royalties from music streaming services, live performances, and collaborations with other artists.

Inspired by popular rappers like Gucci Mane and 50 Cent, OhGeesy started his career in music by sharing his songs on SoundCloud. After meeting Fenix Flexin while doing graffiti in Los Angeles in 2012, OhGeesy began making music together. As a duo, they released a number of tracks, including Tommy by the Gucci, Vice City, In the Field, and Home Invasion.

Fast forward to 2014, Rob Vicious and Master Kato joined the pair, and the quartet released a string of singles and collaborations over the next few years. The most popular among those were Like Me, Xanpagne, Hunned Pac, and Boofd Out. Despite recording songs and performing at shows, the group didn’t have an official name until 2016, when they baptized themselves as Shoreline Mafia.

The group gained nationwide attention in 2017 when they independently released their first full-length mixtape, ShoreLineDoThatShit, which includes standout tracks like Musty, Nun Major, Spaceship, Whass the Deal, and Serve a Boat.

The following year, Shoreline Mafia headlined their Only The Xclusives tour and signed a deal with Atlantic Records, which re-released the group’s ShoreLineDoThatShit mixtape. Still in 2018, the group embarked on their Still OTX tour and released a 4-track EP titled Party Pack in 2018.

Three of the EP’s tracks – Pop Up, Foreign, and Bussin – received more than 3 million plays across different music streaming platforms, while the EP’s Boot It Up song reached almost 10 million in just a short period of time.

Though the group seemed to be on a roll since 2018, their fans were shocked when Flexin announced in April 2020 that he would be leaving Shoreline Mafia after the June 2020 release of their debut album, Mafia Bidness. Apparently, Fenix Flexin’s departure from the group ultimately led to its total disbandment.

Since the group’s disbandment, OhGeesy has released two albums: Geezyworld in 2021 and Geezyworld (Deluxe) in 2022. Geezyworld is composed of 11 songs, including Who Else, Get Fly, and Big Bad Wolf. The deluxe version, on the other hand, has a total of 18 tracks, including Press the Button, Dog Food, and Slide Thru.

He has also released a number of singles this year, including Appetizer, Baby Shock, Up, and Knock Knock, which just dropped in October 2022.

OhGeesy net worth is also boosted by the sales of his official merchandise items, which are available on Geezyworld.com. With a price range of $15 – $85 per item, OhGeesy’s merch collection includes tees, hoodies, socks, and skateboard decks for men; t-shirts, jumpsuits, slippers, and false eyelashes for women; as well as footwear and apparel for kids.

OhGeesy also makes money as a YouTuber. Aside from audio tracks and music videos of his songs, his official YouTube account also includes some personal vlogs. As of October 2022, OhGeesy has a total of 277,000 subscribers on YouTube.

OhGeesy is currently 28 years old. He was born November 27th, 1993 in Los Angeles, California. His parents are from Mexico, but not much is known about them. He has a brother named Julien Coranza.

OhGeesy is not married, but it is believed that he is dating a model name Katherine Garcia, also known as Allurexnu.

OhGeesy and Allurexnu share a son named Sincere Juelz Coranza, who was born in March 2019.