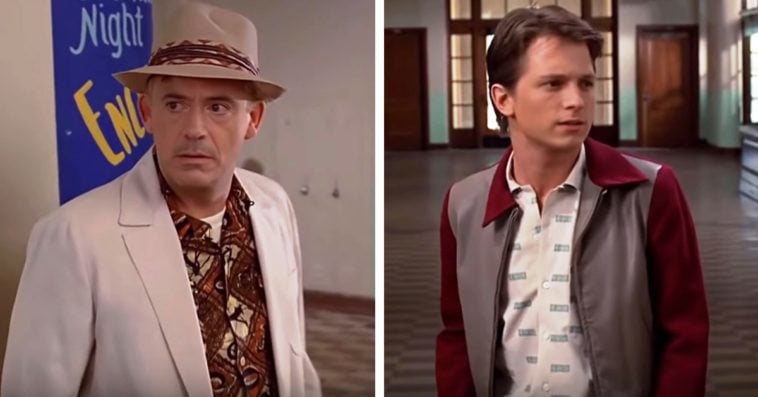 Though Robert Downey Jr. and Tom Holland both starred in the fantasy adventure movie Dolittle last month, the two MCU actors didn’t technically reunite onscreen. Because unlike Downey who appeared in the flesh in the movie, Holland just voiced one of the many CGI animals in the flick. So if you’re one of those fans who miss seeing the two beloved actors appear on screen together, then the Back to the Future deepfake below would definitely make your day.

Created by EZRyderX47 on YouTube, the deepfake sees Downey and Holland’s faces digitally imposed over Christopher Lloyd’s Doc Emmett Brown and Michael J. Fox’s Marty McFly, respectively. In the one-and-a-half-minute scene from the 1985 sci-fi comedy directed by Robert Zemeckis, Holland’s Marty, who is stranded in 1955, finds out that his teenage mom Lorraine (Lea Thompson) “has got the hots” for him. And to avoid messing the timeline, Downey’s Doc Emmett tells Marty to play cupid for his high school-aged parents.

While this might just be a typical deepfake video for some, it’s definitely a huge deal for Holland’s fans, as the 23-year-old actor previously revealed that his portrayal of Peter Parker in Spider-Man: Homecoming was based on Fox’s Marty.

“He gave us a load of videos, old movies, to watch before starting shooting: Pretty in Pink, Back to the Future, Breakfast Club, Ferris Bueller’s Day Off,” Holland told Yahoo Movies of Spider-Man: Homecoming director Jon Watts in 2017. “My goal was to try and kind of be our generation’s Marty McFly. That was what my all-time goal was, and I was actually lucky enough that a journalist said, ‘Oh, you’re kind of like Marty McFly in this movie.’”