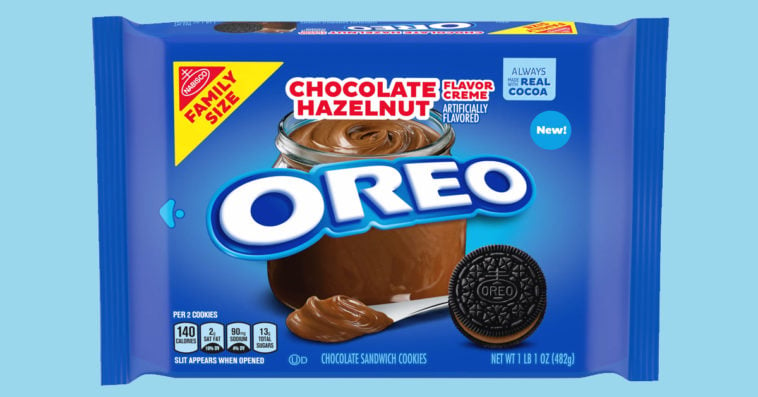 Oreo is releasing a flavor that tastes like Nutella.

Called Chocolate Hazelnut Oreos, the new variant features a chocolate-hazelnut crème filling sandwiched between two chocolate cookies. Though not an official collaboration between Oreo and Nutella, the words “chocolate hazelnut” suggest that the new Oreo flavor has the same delicious taste as the popular spread.

If you think that you’ve already come across this flavor before, that’s because it’s actually a revamped version of the original Chocolate Hazelnut Oreos that were released back in 2018. The original also had a chocolate-hazelnut crème filling, but it was sandwiched between two golden vanilla cookies instead of chocolate ones. Also, the original was only a limited-edition release, unlike the new and updated variant that is officially joining Oreo’s permanent lineup of flavors in January 2021.

In addition to Chocolate Hazelnut Oreos, Java Chip Oreos will also be released in January 2021 as a permanent flavor. Java Chip Oreos feature the same chocolate cookies we know and love, but are stuffed with a light-brown, coffee-flavored crème filling swirled with tiny chocolate chips.

Next year’s launch of Chocolate Hazelnut Oreos will make Oreo the latest snack brand to add a chocolate hazelnut-flavored product to its permanent offerings. In April 2019, Hazelnut Spread M&M’s hit store shelves as a permanent variant of the beloved chocolate candy brand. First announced back in September 2018, Hazelnut Spread M&M’s feature the signature M&M candy coating but is filled with creamy chocolatey hazelnut, similar to the much-loved spread Nutella.