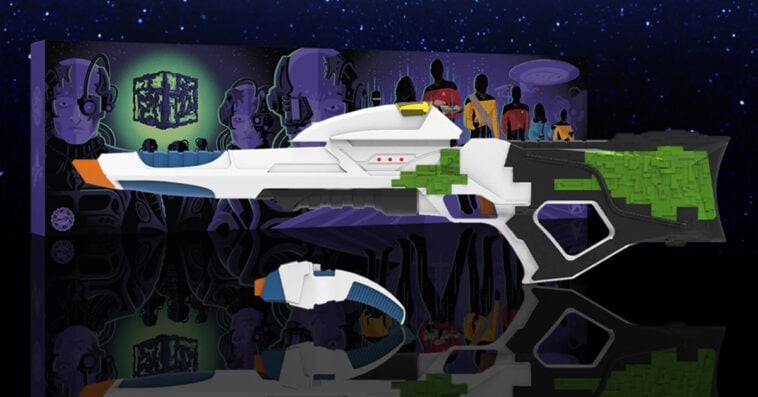 Star Trek is the latest media franchise to be featured in Nerf LMTD, a premium and fan-targeted line of Nerf blasters that brings to life some of the most iconic items from movies, TV shows, and video games.

On Wednesday, Nerf unveiled the Nerf LMTD Star Trek Starfleet Type 3 and Starfleet Type 2 Phaser Blasters, a set of dart-blasting toys inspired by the TV series Star Trek: The Next Generation, which is celebrating its 35th anniversary this year. Below is everything we know about the newest Nerf LMTD blasters.

The Starfleet Type 3 Phaser Blaster is a motorized dart blaster with light-up effects that simulate the look of being assimilated by the Borg ― a homage to the 1996 film Star Trek: First Contact. Also boasting phaser sounds and authentic First Contact movie sounds, the blaster fires 5 foam darts in a row from an internal 5-dart clip. Power up the motor, take aim at your target and pull the trigger to launch the darts.

The Starfleet Type 2 Phaser Blaster looks much like the phasers handled by Jean-Luc Picard (Patrick Stewart) and the rest of the U.S.S. Enterprise crew in The Next Generation. Featuring premium design details and a pull-back priming handle, the blaster fires 1 dart at a time. Load 1 dart into the blaster, prime, and press the button to launch the dart.

Where to buy the NERF LMTD Star Trek phaser blasters

Being sold together as a set, the Starfleet Type 3 and Starfleet Type 2 Phaser Blasters are now available for preorder on Amazon and Entertainment Earth at $119.99. Shipping is slated for December 2023. This set of Nerf blasters, which includes a motorized blaster and a pull-back blaster, is inspired by the phasers used by Jean-Luc Picard and the crew of the U.S.S. Enterprise in Star Trek: The Next Generation.

Prior to launching the Star Trek phaser blasters, Nerf LMTD has covered pop culture properties like Star Wars, Aliens, and Halo, just to name a few.