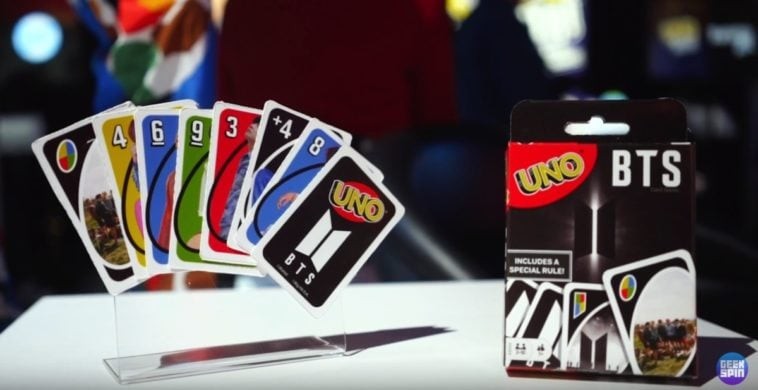 These Barbie-like dolls are wearing mini versions of the bright patterned suits worn by BTS members in their Idol music video.

This special edition UNO card game has the same rules as the standard game but includes an extra rule card called Dancing Wild.

Update (March 22nd): Since the start of the week, Mattel has been further teasing fans. Take a look at the teaser tweets below:

Original story: Mattel confirmed the outfits of its much-buzzed-about BTS fashion dolls at Toy Fair last month and we got the exclusive hands-on.

In a special showcase at the toy industry trade show, Mattel displayed the bright-colored casual suits worn by BTS in the music video of their hit song Idol. A rep for the toy manufacturer said that the BTS fashion dolls will have the same outfits, promising that the detail into each costume will be very high.

Like other Mattel fashion dolls, the BTS fashion dolls stand 11.5 inches tall and will be sold for $20 each. So if you like to have dolls in the likeness of V, J-Hope, RM, Jin, Jimin, Jungkook, and Suga, you need a total of $140 to get the whole band.

The BTS fashion dolls will hit the shelves on September 1st, but a photo teaser of the dolls will be unveiled sometime this March.

In addition to fashion dolls, Mattel will also be releasing a BTS UNO card game. The rep for the company said that the BTS UNO game generally has the same rules as the standard UNO game, but it does come with an extra special rule and a special card.

Announcing the first ever line of BTS fashion dolls! We are thrilled to partner with @bts.bighitofficial to bring our favorite pop artists to millions around the world! The dolls will hit stores internationally this summer, but until then, be sure to follow us for more #BTSxMattel updates. #BTSDollsOfficial

It was then confirmed by Sejal Shah Miller, SVP and Global Brand GM for Mattel, in a statement saying: “BTS is a pop-culture music phenomenon that transcends age, culture and language, and through this partnership, Mattel will offer a new way for millions across the world to engage with the band. Partnering with established franchises that have global appeal is a cornerstone of our strategy and given our creative expertise, we are perfectly suited to create products celebrating BTS.”