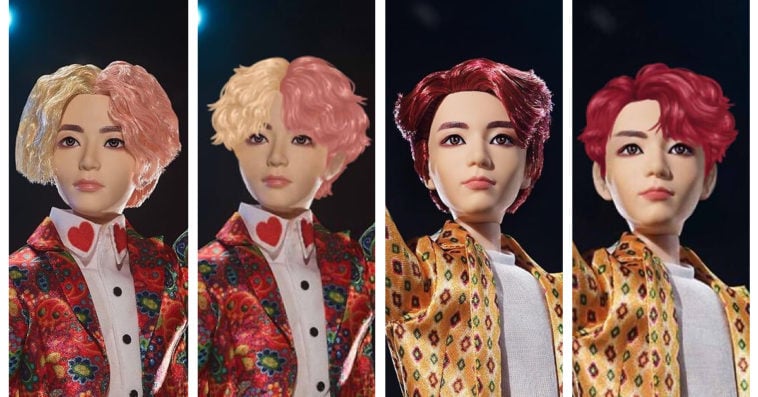 Following the criticisms that Mattel received over their BTS fashion dolls last week, a fan edited the first look photos of the dolls to make them look more accurate to the K-pop boys’ actual features.

A BTS fan named Christina, whose Twitter handle is @smol309, first shared her edited photo of the V doll, which shows a more accurate hairstyle of Tae-hyung. Christina also uploaded a clip of how she modified the picture.

Next was the Jimin doll. In the edited pic, Christina fixed the doll’s hairstyle and eyebrows, and gave them a new color. She also altered the shape of the doll’s jaw to make it look more similar to Jimin’s jaw in real life.

For the J-Hope doll, Christina lightened up its makeup and remedied the hair and the eyebrows.

Meanwhile, Christina improved the eyebrows of the RM doll and lowered its eyes a little bit.

Christina thought that Mattel did a great job capturing Suga’s facial features, so he didn’t change a thing on the doll’s face. She, however, still fixed the doll’s hair.

In addition to fixing the hair of the Jin doll, Christina also made its eyebrows thicker.

boldened his eyebrows bc jins brow game is ?️OLD pic.twitter.com/PUTlVlWVXf

And last but not least, Christina shortened the hair of the Jungkook doll and made its lips even pinker.

brows changed and i kinda cheated and made his lips more pink pic.twitter.com/kHKXaBBiYI

Christina’s fellow ARMY members were impressed with the edits she did. Some even commented that Mattel should hire her to join the toy maker’s creative team.

READ  Jodie Whittaker gets her own Doctor Who Barbie doll

But despite editing the first look photos of the dolls, Christina revealed in a tweet that he actually found the dolls “fine” but their hair made them “look like trolls.” “The problem is they made their hair too long and didn’t give them undercuts so now they just look like soccer moms,” explained Christina.

Since the dolls are mass produced, Christina seems to understand the lapses in the dolls facial features. But she thinks Mattel can do something about the dolls’ hair. “Fixing [their] hair wouldn’t be difficult, just make it a bit shorter,” Christina tweeted. “They could make all their hair shorter. I hope they take it into consideration [because] there’s still ‘til September before the release.”