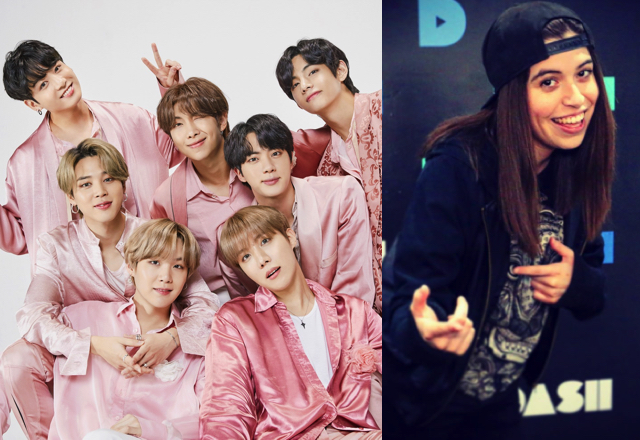 Most fans (A.K.A. ARMY) already know that BTS produces their own music. However, there is also an amazing team of songwriters that stands by their side to bring these colossal hits to life, and GEEKSPIN recently sat down with one of them for a quick chat. Meet Candace Sosa, one of the brilliant young minds behind some of BTS’ biggest hits. Aside from her extensive work with BTS and her own artist project on the rise, Candace has collaborated with other K-Pop groups, including TXT, OnlyOneOf, and WayV as well.

Her first collaboration with BTS kicked off with Jungkook’s iconic solo track “Euphoria”, and it was nothing short of a case of serendipity. The melodic ballad revolves around experiencing a love so strong and pure that it induces a sense of euphoric happiness. All we can say is that Jungkook’s flawless vocals were the perfect match for this inspirational melody.

How did you feel when you first saw “Euphoria” performed live?

“Seeing them perform that live was like insane. I mean seeing all these lights and everybody singing along, it was so hard to hold back tears. I was like ‘I can’t even believe this is happening right now’.”

After the phenomenal success of “Euphoria”, this gifted musician continued to collaborate with Big Hit Entertainment and BTS, producing masterpieces such as, “Mikrokosmos”, “Magic Shop”, “Love Maze”, “I’m Fine”, “Love Myself”, “Moon”, and “We Are Bulletproof: The Eternal”. The latter two songs were part of BTS’ newest album, Map of the Soul: 7, and have been breaking one record after the other.

“We Are Bulletproof: The Eternal” is a beautifully chilling pop ballad that tells the tale of BTS’ humble beginnings. The lyrics explore the elements of how they braved the odds and eventually came out on top. It basically expresses a riveting message of believing in your dreams and never giving up. Moreover, the song also serves as a heartfelt ode to the fans who have stuck by their side all this time.

With regard to “Moon” by Jin, it has been creating quite the buzz online, as the song has ascended to the number one spot on iTunes in over 92 countries and counting! This extraordinary feat has officially made the song the highest-ranking B-side track of the album.

Humming the pre-hook of the song, Candace recounted her days in the studio with DJ Swivel when they were still bringing this track to life.

What’s the story behind “Moon”?

“I remember coming up with that in the studio with Swivel, and I was like ‘dude, we got it. This is it. I know they’re gonna love this. We got one. We’re good. We’re gonna be on the next album… I was so sure of it based on that specific melody, and we got it, and I was so happy. And that’s Jin’s solo song too, and that one’s doing really well right now too.”

Before peppering her with more questions, we asked Candace who her favorite BTS member or bias is?

“I love Jungkook, because he does ‘Euphoria’ and his voice is insane.” she replied. “But I do have a slight thing for Jimin, so I would have to go with Jimin on that one.”

Who is your bias wrecker?

A few months ago, Candace also had the opportunity to go on tour with Dutch DJ and record producer, Armin Van Buuren, to promote their song, “Runaway”.

Now venturing into an artist project of her own, Candace has released her debut single, titled “Slave”, earlier this year. The song starts with an attention-grabbing beat and will leave you even more wonderstruck once you hear the profound meaning radiating from the lyrics.

What inspired you to write “Slave”?

“Slave is like personifying, it’s speaking to my anxiety and depression. So, like ‘it kind of feels like you’re real and I’m your slave’. I actually have a lot of anxiety when it comes to phone calls. Skype is different, but phone calls, I get really weird about, and I think I was just pulling from that and I was also going through depression last year. That song is just kind of like I don’t want to become a slave to my own crazy thoughts that I can’t control. So, “Slave” is kind of just like symbolism with the chains and everything. It’s kind of how I felt when I was writing it. So, that’s the inspiration behind that.”

If you were to introduce yourself to someone who has never heard of your music before, which song would you choose to best represent your music?

“I have a song that I just did a music video for. It’s for my artist project and it’s called ‘Trapped’, and it’s one of the deepest songs that I’ve ever written. I mean it’s not the happiest song. It’s like dark, but it has a vibe to it that you can still move your body to it, but it’s also sad. I’m a really emotional person, so I think to represent myself best for who I am and what I’ve gone through, I think ‘Trapped’ would be a way to introduce my music to somebody.”

“Trapped” is set to be released around August this year. Seeing as how Candace described the song as somewhat of an extension of “Slave”, we are looking forward to seeing how the story in this powerful saga of emotions continues!

Although Candace expresses immense gratitude for how her songwriting career took off so smoothly, Candace’s end goal is for her artist project to take off as well.

What are your other dreams and goals, aside from producing music?

“I’m not gonna take that for granted, but the reason that I’m here is that I really do want the artist project to take off. Like that’s what I wanna do. I wanna get my own Grammy, you know? I wanna be going on tours and have that many people there specifically for me. That would feel incredible. That’s the ultimate dream.”

Aside from her current singing and songwriting endeavors, this up-and-coming artist would love to sing a duet with Jungkook and work on producing music for film and television as well. She also playfully added that she was amazed when BTS performed “I’m Fine” on The Tonight Show Starring Jimmy Fallon, and how much she dreams of being a guest on the show someday too. Candace even joked that she would take her cat, Fireball, with her. (Let us know, if you see this, Jimmy Fallon!)

Do you have a message for our GEEKSPIN readers?