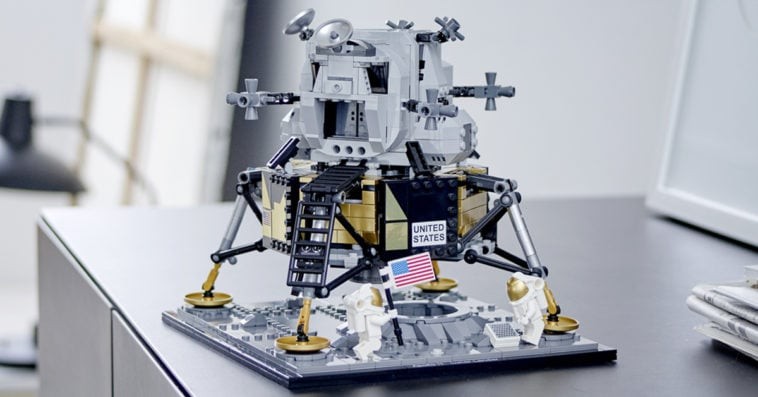 In cooperation with the National Aeronautics and Space Administration (NASA), LEGO has developed a miniature version of the Apollo 11 Lunar Lander in honor of the 50th anniversary of man’s first moon landing. 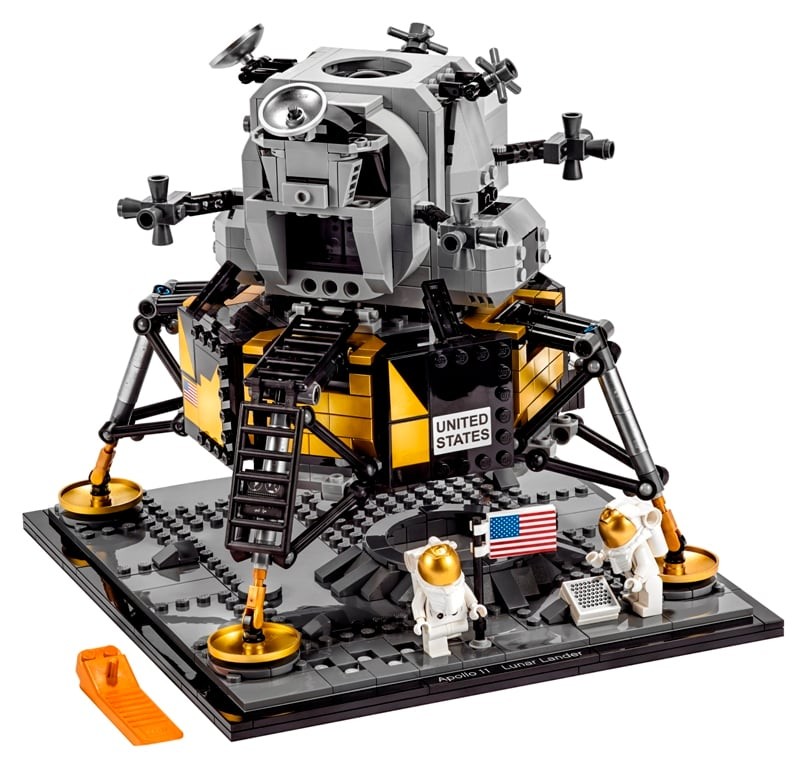 The playset is divided into two separate stages: the ascent stage and the descent stage. The ascent stage features a detailed interior with room for 2 astronaut minifigures, which are included in the set. The descent stage, on the other hand, is made more realistic with gold-colored landing pads and panels, an opening camera, laser hatches, and a ladder.

Measuring over 7 inches high, 8 inches wide, and 7 inches deep, this collectible model makes a great centerpiece for home or office and gives a challenging and rewarding building experience full of nostalgia. 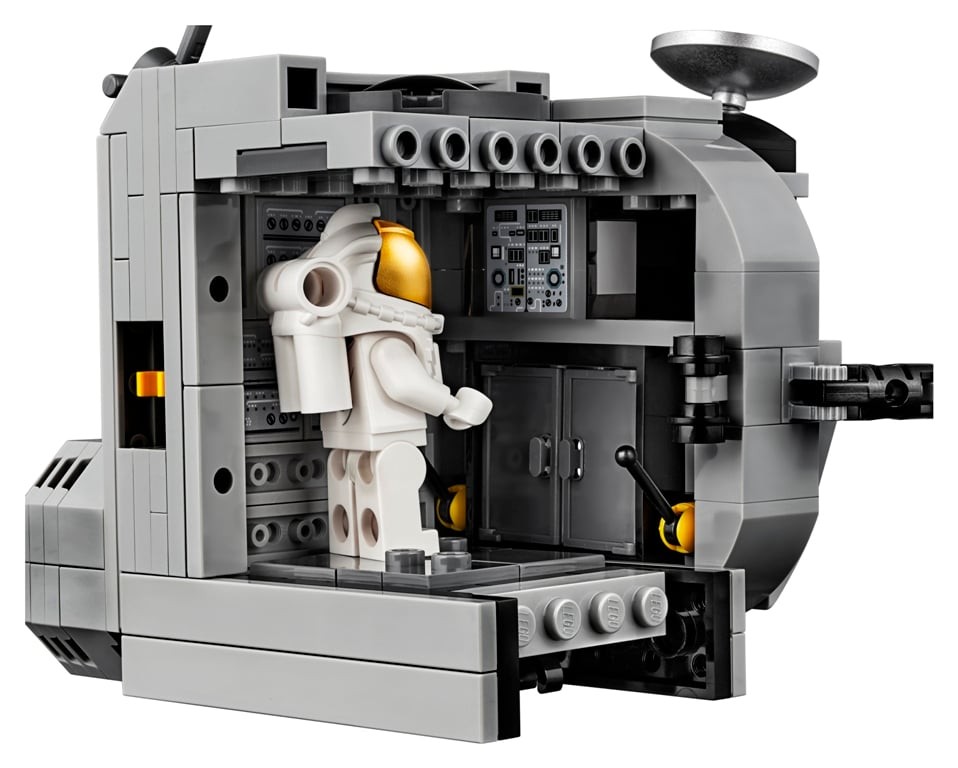 The $99.99 set will be exclusively available at LEGO Stores and shop.LEGO.com starting June 1st.

In addition to the Apollo 11 Lunar Lander set, LEGO has also unveiled 7 new LEGO City Space building sets inspired by NASA’s recently announced ambitions around the next frontier to return to the Moon and ultimately send astronauts to Mars.

This 84-piece set features a shuttle with a minifigure cockpit, flapping wings, and space in the back for a satellite with opening solar panels. This $9.99 playset also includes an astronaut minifigure in Extra Vehicular Activity suit with golden visor and a wrench accessory. Explore the lunar surface with this 202-piece playset that features a rover with a removable cockpit, an articulated grappling arm, a tilting, removable solar panel generator, and large all-terrain wheels. With a price tag of $29.99, this set also comes with an astronaut and a ground crew technician minifigures. Completing the set are the 2 geodes, a rover pilot helmet with blue visor, technician’s hard hat, remote control, laptop, rock drill, and a video camera with buildable stand. The main component of this 273-piece set is a space research shuttle with opening cockpit, 2 large opening doors, and a space inside for a storage drone. In addition to the storage drone, this $39.99 toy also features a Mars rover with articulated grappling arm; laser and tilting solar panels; a heli-drone with spinning rotor blade and a scanner to read a secret symbol discovered on Mars. There are also 2 astronaut minifigures included in the set. 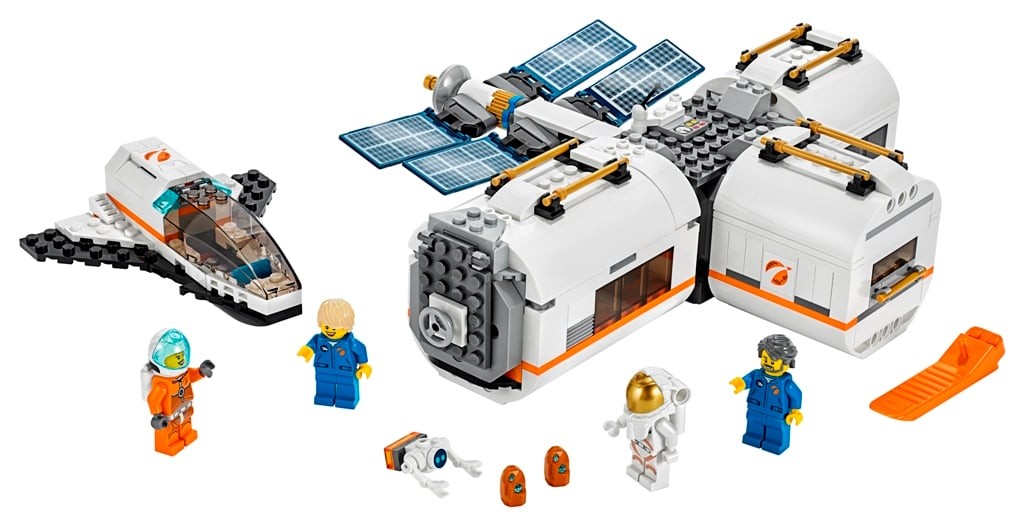 This 412-piece space station toy set features 3 detachable modules with removable roofs: a living module with a treadmill, anti-gravity bed, and TV screen; a lab module with light brick and research tools; and a kitchen module with plants and a pizza oven. These 3 modules can be put together in different ways around and on the central airlock compartment.

This $59.99 set also includes a detachable satellite with folding solar panels; a detachable space shuttle with cargo space and an opening cockpit; 2 astronauts and 2 crewmembers minifigures; and a robot figure. 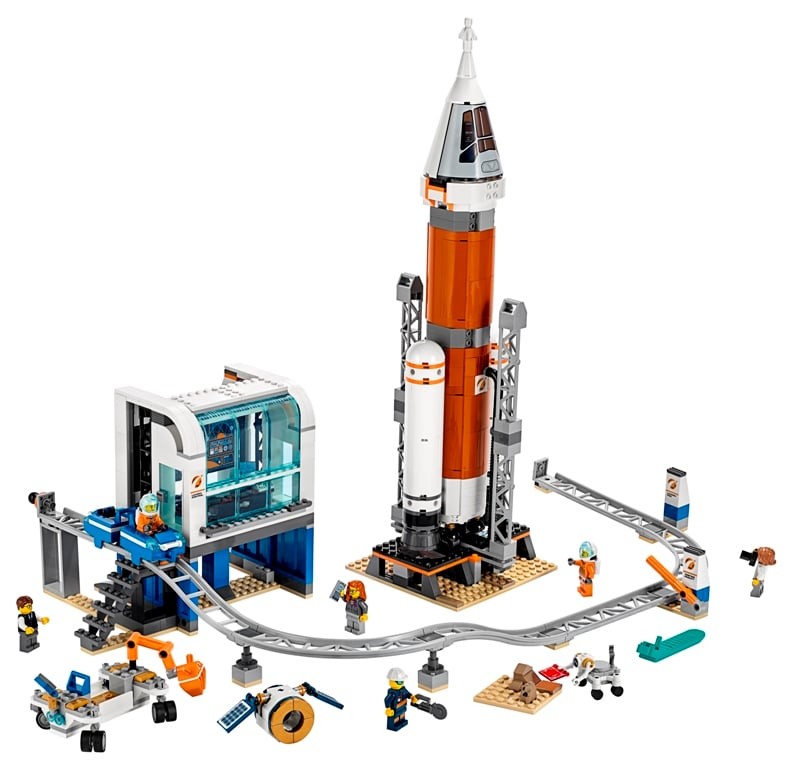 This 837-piece playset features a multi-stage rocket with booster, payload storage, and 2-minifigure cockpit modules. It also includes a rover with an articulated grappling arm; a space telescope with folding solar panels and a magnifying glass; and a monorail system with multi-stop track and 2 cars.

This $99.99 playset also comes with an opening launch control tower with large screens inside for countdown and monitoring of the rocket. It also includes 6 minifigures: 2 astronauts, 2 scientists, a launch director, and a ground crew technician.

Let your kids do some roleplaying with this extensive 1055-piece building set that features a huge multi-stage rocket, a large rocket transport crawler, a tilting rocket cradle support, a rover transport truck with articulated grappling arm, and a rover with extending arm and drill bit.

The minifigures included in this set are 2 astronauts, 2 ground crew technicians, a launch director, a scientist, and a lab mechanic.

This 209-piece set includes 14 minifigures: 7 astronauts, a reporter, a camera operator, a personal trainer, a drone engineer, a rocket engineer, a mechanical engineer, and a botanist. This $39.99 set also includes a spinning G-force training machine, 2 beds, a treadmill, a drone with spinning rotor, a growing pod with plant, a robot stand, a rocky ground scene, a computer stand with screen, and a test rocket with a stand.

All these LEGO City Space sets will be available globally on June 1st and in North America beginning June 23rd.