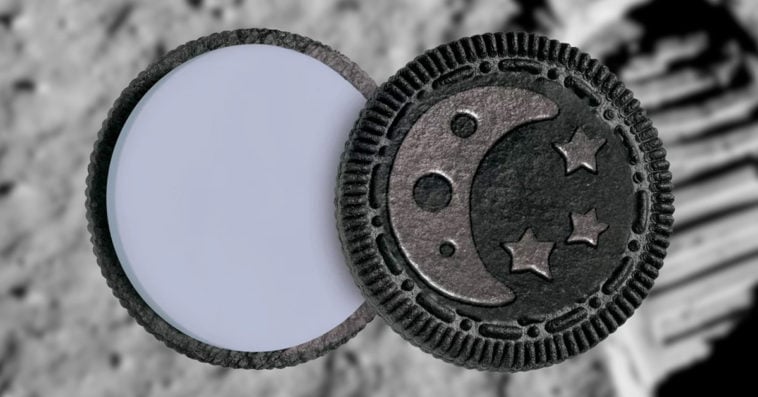 This summer marks the 50th anniversary of Apollo 11 mission that successfully brought the first astronauts to the moon.  And to celebrate this historic moment, snacks manufacturer Nabisco is releasing a limited-edition chocolate sandwich cookie called Marshmallow Moon Oreo.

Announced earlier this month, Marshmallow Moon Oreos will hit the store shelves in mid-June, roughly a month before the July 20th anniversary date of the Moon Landing.

Filled with delicious purple marshmallow crème, Marshmallow Moon Oreos feature three cookie designs inspired by the Moon Landing. The first design shows a waning crescent moon with three stars beside it. The second design displays an Apollo-like astronaut standing by a flag with a ringed planet and stars in the background. Lastly, the third cookie design features an embossed motif of a space shuttle blasting through a field of stars and planets.

Marshmallow Moon Oreos come in a glow-in-the-dark packaging with the inscription, “Moon Landing 50th Anniversary.” A sticker set commemorating the momentous event is also included in the pack.

Not a fan of marshmallow filled-cookies? Don’t worry, because there are three more Oreo variants coming out this summer.

Oreo Thins Latte, a permanent addition to the Oreo Thins line that features a latte-flavored crème filling, will be released in June.