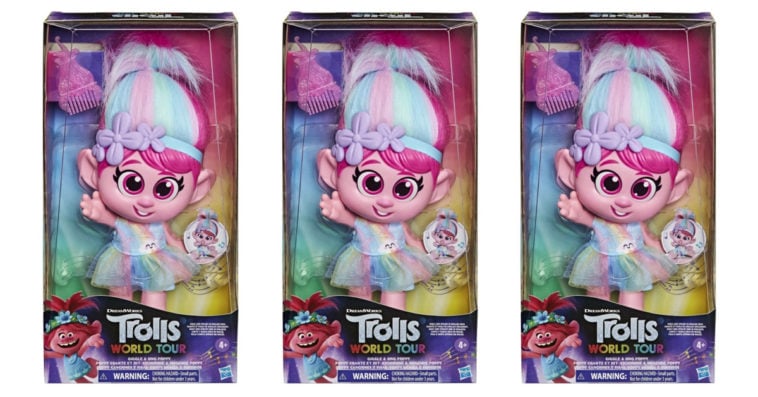 Hasbro announced over the weekend that it is pulling a Trolls doll from store shelves after receiving complaints that a button on the toy is inappropriately placed under its skirt. The decision also came a few days after Jessica McManis created an online petition urging Target, Walmart, and Amazon to remove the said toy from their selling areas.

The doll, which is officially called DreamWorks Trolls World Tour Giggle and Sing Poppy, has two buttons. The first one is placed on her stomach that when pressed will cause the doll to sing and say lines such as, “How about a hug?” The second button, meanwhile, is found on her bottom under her skirt that when pressed will prompt the doll to make sounds such as “Whee!” and “Oh!”, as seen on a video shared by former senate candidate Sam Parker on Twitter, which has now over 800,000 views.

According to the petition, the placement of the second button makes the doll “not okay for a child’s toy.” “What will this toy make our innocent, impressionable children think? That it’s fun when someone touches your private area? That pedophilia and child molestation are ok? It’s not ok! It’s not fun!”, read a portion of the petition, which has now garnered over 460,000 signatures. “It’s damaging and has long term affects [sic] on a child’s mental/physical health!”

In a statement, Hasbro spokesperson Julie Duff said that the second button “was designed to react when the doll was seated.” The toymaker recognized that the “placement of the sensor may be perceived as inappropriate,” but made it clear that it was “not intentional.” Duff added that Hasbro is “happy to provide consumers with a replacement Poppy doll of similar value” through their Consumer Care team.”

Voiced by Anna Kendrick, Poppy is one of the main characters in the computer-animated musical comedy film Trolls World Tour, which premiered for on-demand video streaming in April. The movie, which also features the voices of Justin Timberlake, Rachel Bloom, James Corden, Ron Funches, Kelly Clarkson, among many others, had the biggest opening day and weekend for a digital title ever.