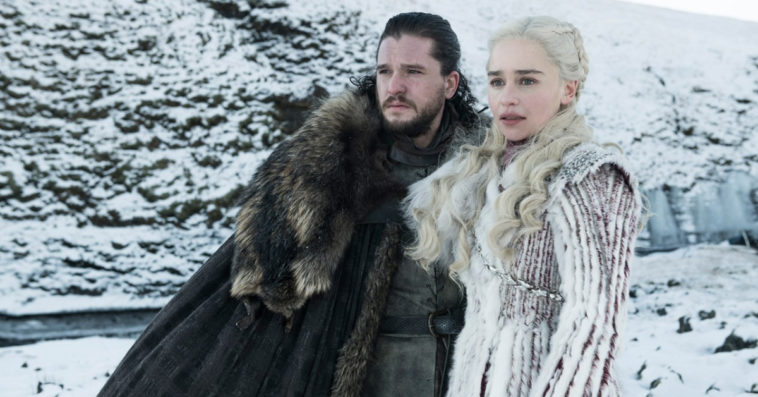 The official trailer for eight and final season of Game of Thrones has finally arrived. And even though fans have known for quite some time that the epic HBO saga will end with the long-simmering war between the living and the dead, the trailer succeeds in inducing a feeling of terror as the White Walker make their way to Westeros.

The two-minute clip opens with a horrified Arya (Maisie Williams) running for her life. While it’s unclear what’s coming after her, the most obvious theory is that she’s trying to keep herself alive after the White Walkers and the Army of the Dead have infiltrated Winterfell.

The trailer then reveals that Tormund (Kristofer Hivju), Beric (Richard Dormer) and Edd (Ben Crompton) — who were left missing in action when the Night King and his ice dragon wreaked havoc in Eastwatch-by-the-Sea at the end of Season 7 — have actually survived the attack and have made it somewhere.

The video also shows Daenerys’ (Emilia Clare) arrival and Jon’s (Kit Harington) return to Winterfell, where Sansa (Sophie Turner) is seen bewildered by the Silver Queen’s two remaining dragons. From that scene, the trailer cuts into a series of shots showing Gendry (Joe Dempsie) in the armory, Jorah (Iain Glen) leading the soldiers in the battlefield, and Missandei (Nathalie Emmanuel) and Grey Worm (Jacob Anderson) sharing a kiss on the lips before the Great War begins.

Also seen in the trailer is Jaime’s (Nikolaj Coster-Waldau) arrival in Winterfell, where he promises to fight for the living. Meanwhile in King’s Landing, Jaime’s twin sister and lover, Cersei (Lena Headey), looks lonely and heartbroken despite the arrival of the new mercenary force from Essos, The Golden Company, that will strengthen her army.

The video, which also features Bran (Isaac Hempstead Wright), Sam (John Bradley), Tyrion (Peter Dinklage), Brienne (Gwendoline Christie), and Podrick (Daniel Portman), ends ominously with the army of the living bracing themselves in the battle lines for the incoming forces of the dead.

The six-episode Game of Thrones Season 8 will premiere on HBO on April 14th.