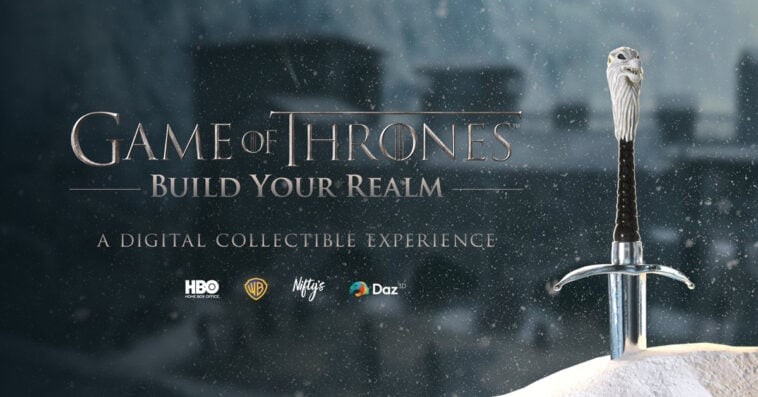 Digital collectibles and experiences based on the hit HBO series Game of Thrones are coming very soon.

What is Game of Thrones: Build Your Realm?

Game of Thrones: Build Your Realm is described as a “one-of-a-kind collectible experience for the ultimate fan”. The preliminary sale will start with the release of unique avatars inspired by the show, which will be bundled with a pack of digital collectibles allowing users to begin their journey and upgrade their avatars.

Build Your Realm is a multi-chapter program that will progress through thematic activities, on-site engagement, and additional digital collectibles, which will be on sale as assorted packs and come in a variety of types. One of those types is called Equipables, which include weapons, companions, and gears. Equipables can be burned and forged, allowing fans to customize and strengthen their avatar.

Other collectible types will feature iconic moments, locations, characters, and more from the Emmy-winning series that will help each collector build their realm as they advance into the digital program.

Daz 3D — the 3D-content and software company known for launching and designing the NFT project DC’s Bat Cowl Program — has been tapped by Warner Bros. Discovery and Nifty to help design, develop, and produce the Build Your Realm.

“Every so often, a film or television series comes along that pushes the boundaries of its genre so far, it forever changes the creative landscape, becoming a part of our collective cultural identity. Game of Thrones is that series for this generation,” said Jeff Marsilio, CEO and Co-Founder of Nifty’s, in a press release. “Nifty’s is thrilled to be working alongside Warner Bros. Discovery Global Consumer Products to keep pushing the bounds of creativity and imagination, through a new kind of digital collectible that will allow fans of the franchise to connect in ways they never have before.”

Commenting on the collaboration, Josh Hackbarth, Head of NFT Commercial Development for Warner Bros Discovery, said: “Our goal, as always, with the fans, is to create new ways for them to interact with the stories and characters they love. We’re excited to expand the Game of Thrones fandom and franchise with this unique digital collectible program that’ll engage fans on a deeper level, allowing them to immerse into the world of Westeros, and enhance the overall fan experience.”

When will Game of Thrones: Build Your Realm launch?

While an exact launch date has yet to be set, the announcement of Build Your Realm comes a week after the season 1 finale of the Game of Thrones prequel series House of the Dragon, and a month before the first-ever Game of Thrones Official Fan Convention.

Visit Niftys.com and follow @BuildYourRealm on Twitter for updates on when the NFT collection and digital experience will launch.

What other NFT collections based on TV shows are there?

Earlier this year, it was announced that NFTs based on Looney Tunes and Star Trek are coming. NFT Trading Cards based on the DC multiverse also launched last March.