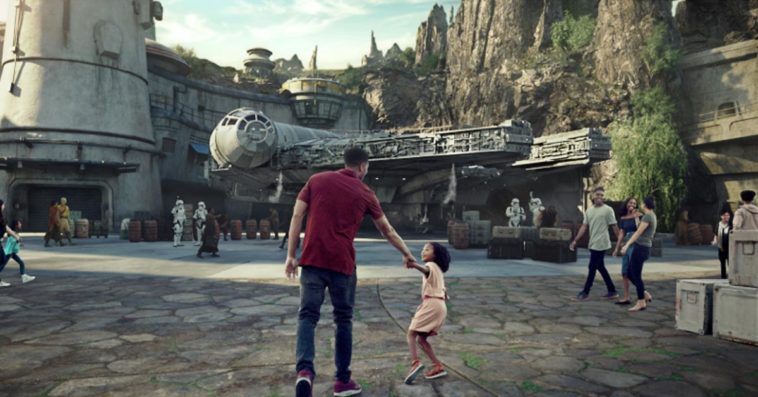 On Christmas Day, Disney released a new video teasing the much-awaited opening of Star Wars: Galaxy Edge both at the Disneyland Resort in California and at the Walt Disney World Resort in Florida.

The two-minute clip starts with Scott Trowbridge, creative executive at Walt Disney Imagineering, revealing how he hopes park-goers will feel once they enter the newest Star Wars-themed land.

“I hope that when people come to Star Wars: Galaxy’s Edge and they experience it for the first time that this place they’re walking through and the characters they’re seeing and the beasts, aliens, and droids put them in a position when they give themselves over to the moment of the story and play with us in the world of Star Wars,” says Trowbridge.

Carrie Beck, vice president at Lucasfilm Story Group, adds that walking into the land for the first time will be “jaw-dropping and incredibly emotional” because every aspect of the fictional world of Star Wars has been perfectly brought to life.

Trowbridge and Beck also talk about the two main attractions that visitors will get to experience at Star Wars: Galaxy’s Edge. Entitled Millennium Falcon: Smugglers Run, the first attraction puts guests into the cockpit of the titular Corellian light freighter and lets them take over the ship’s controls in one of three unique flight crew roles.

“The experience on Millennium Falcon: Smugglers Run puts you straight in that cockpit right behind the controls,” Trowbridge says. “Whether you’re one of the pilots or gunners or flight engineers that are keeping the ship operating, it is going to be an intense super fun experience on the fastest ship in the galaxy.”

In the second attraction called Star Wars: Rise of the Resistance, park-goers will find themselves in the middle of an epic battle between the Resistance and the First Order.

“I think any great story has tension and conflict and it’s not Star Wars without the war so it was absolutely fundamental that the story of the land actually finds the guests between the Resistance and the First Order,” comments Beck.

Described by Trowbridge as the “most epic attraction” Disney has ever built, Star Wars: Rise of the Resistance recruits guests to become members of the Resistance and stand up against the First Order. Park-goers will end up aboard a Star Destroyer where they will have to take down 50 audio-animatronic Stormtroopers and will also have to go against Kylo Ren in an encounter no one has ever experienced before.

The Star Wars: Galaxy’s Edge will open at Disneyland Resort in summer 2019 and at Walt Disney World Resort in fall 2019.