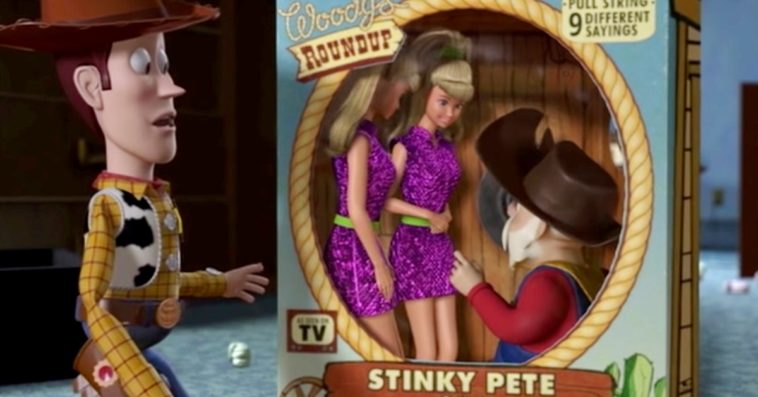 A faux outtake in the original 1999 release of Toy Story 2 has been quietly removed by Disney from its re-release of the movie last month.

The 25-second scene in question, which appeared at the end of the movie, starts with Woody (Tom Hanks) interrupting a seemingly secret meeting between the film’s antagonist Stinky Pete (Kelsey Grammer) and twin Barbie dolls inside his toy box.

“So you two are absolutely identical?” Stinky Pete pervertedly asks the mini-dress-wearing dolls, totally unaware that the camera is on him. After letting out a salacious laugh, the old prospector grabs the hand of one Barbie and says, “You know, I’m sure I could get you a part in Toy Story 3.” Only then does he realize that he’s being watched. “I’m sorry. Are we back?” he asks nervously, before shooing the dolls out of his toy packaging and reminding them that he can always help them whenever they need more tips on acting. He then ogles the dolls’ derrières as they pass by him before the scene cuts to the next blooper.

The cringe-inducing casting-couch scene bears a striking resemblance to many of the sexual misconduct allegations in Hollywood that have been reported in the past few years as part of the growing #MeToo movement.

The scene is especially uncomfortable because faux blooper reels that run during the credits of Pixar films are known to be based on real-life Hollywood stereotypes and gossips.

Though the faux outtake was still included in the 2010 Blu-ray version of the film, it was no longer part of the 4K Blu-ray releases and new digital downloads in June. The removal of the scene was first noticed by fans when Disney re-released the Toy Story trilogy on 4K, Blu-ray, DVD, and digital HD formats ahead of Toy Story 4 theatrical release last month.

The #MeToo movement has resulted to a series of firings and resignations in the entertainment industry, including at Disney. Last summer, John Lasseter, the co-founder of Pixar Animation Studios and director of Toy Story 2, stepped down from his position in the company after allegations of workplace sexual misconduct. According to The Hollywood Reporter, Lasseter has a history of kissing and touching female staffers inappropriately.  He was also accused of making unwanted advances toward actress Rashida Jones.

Earlier this year, Lasseter joined the animation division of Skydance Media, but was publicly humiliated by #MeToo advocates, including actress Emma Thompson who refused to work with him.