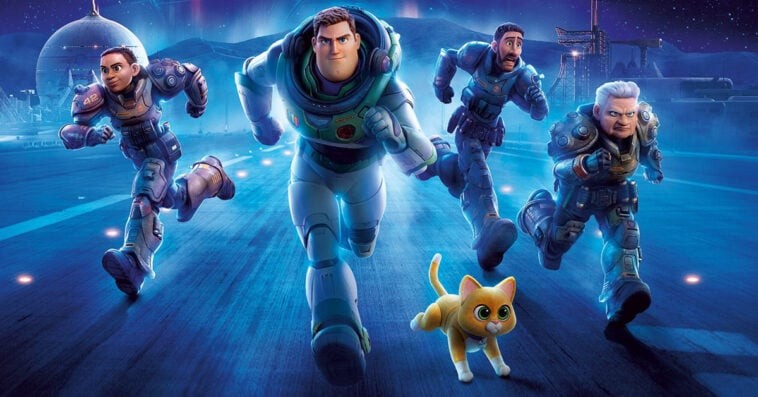 Lightyear is making its streaming debut next month.

The computer-animated movie from Disney and Pixar will be available to stream on Disney Plus starting August 3rd.

The film’s arrival date on the streaming service is in line with the 45-day theatrical window that Disney movies are getting, with the exception of a few blockbuster hits like Doctor Strange in the Multiverse of Madness, which had a longer theatrical run than most Disney flicks in recent months. Lightyear opened in U.S. theaters on June 17th and is still playing in some cinemas across the country.

“Lightyear looks amazing on the big screen, of course, but we are so excited to bring it to Disney Plus,” said Angus MacLane, who directed the film. “We devoted years of our lives to this film and we are so proud of it. We want to share it with as many people as possible. Disney Plus not only gives more fans an opportunity to see Lightyear, it gives us all the means to see it again and again.”

Along with the announcement of the Lightyear Disney Plus release date, the streamer also dropped a new teaser for the movie, which you can watch below:

Get ready to blast off with Disney and Pixar’s #Lightyear streaming August 3 only on @DisneyPlus. ?? pic.twitter.com/iiXGgbcJvE

A story by MacLane, Matthew Aldrich, and Jason Headley, Lightyear is a sci-fi action adventure and the definitive origin story of Buzz Lightyear, the hero who inspired the toy in Toy Story movies.

Lightyear follows the legendary Space Ranger after he’s marooned on a hostile planet 4.2 million light-years from Earth alongside his commander and their crew. As Buzz tries to find a way back home through space and time, he’s joined by a group of ambitious recruits and his charming robot companion cat, Sox. Complicating matters and threatening the mission is the arrival of Zurg, an imposing presence with an army of ruthless robots and a mysterious agenda.

Keke Palmer, Taika Waititi, and Dale Soules provide the voices for the Junior Zap Patrol’s Izzy Hawthorne, Mo Morrison, and Darby Steel, respectively, while James Brolin can be heard as the enigmatic Zurg.

Lightyear dropped two official trailers for Lightyear ahead of its theatrical release, and both trailers have already racked up over 19 million views each as of writing. Check them out below:

As of July 18th, Lightyear has earned $115.8 million in the domestic box office and $97.8 million in international markets, for a total of $213.6 million, according to Box Office Mojo. The movie has a production budget of $200 million.

Lightyear is the lowest-rated film of the Toy Story franchise on Rotten Tomatoes. Despite this, most of the reviews on the movie are generally favorable. On Rotten Tomatoes, 75% of 300 critics’ reviews are positive, giving the flick an average rating of 6.7/10.

The website’s consensus reads, “Lightyear settles for being a rather conventional origin story instead of reaching for the stars, but this gorgeously animated adventure ably accomplishes its mission of straightforward fun.”