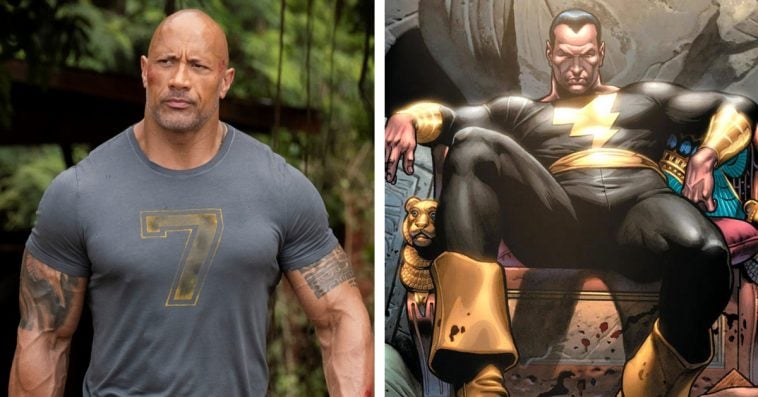 A Black Adam film has been in development for years with Dwayne Johnson attached to play the titular antihero. But on Thursday, the wrestler-turned-actor officially announced that he’s starring in the New Line movie slated to be released in 2021.

In an Instagram post, Johnson revealed that Black Adam will be hitting the theaters on December 22nd, 2021 — a weekend that was great to Warner Bros. in 2018 with the release of Aquaman, and was also good to Johnson in 2017 with the theatrical debut of Jumanji: Welcome to the Jungle.

Directed by Jaume Collet-Serra, Black Adam will open up against Sony’s Hotel Transylvania 4 and Universal’s feature adaptation of the Broadway musical Wicked. Warner Bros. also has Sherlock Holmes 3 on that date, but it’s likely that it will be rescheduled to a later date.

The Man in Black ⚡️ Like most kids growing up, I dreamed about being a superhero. Having cool superpowers, fighting for what’s right and always protecting the people. It all changed for me, when I was 10yrs old and was first introduced to the greatest superhero of all time – SUPERMAN. As a kid, Superman was the hero I always wanted to be. But, a few years into my fantasy, I realized that Superman was the hero, I could never be. I was too rebellious. Too rambunctious. Too resistant to convention and authority. Despite my troubles, I was still a good kid with a good heart – I just liked to do things my way. Now, years later as a man, with the same DNA I had as a kid – my superhero dreams have come true. I’m honored to join the iconic #DCUniverse and it’s a true pleasure to become, BLACK ADAM. BLACK ADAM is blessed by magic with the powers equal to SUPERMAN, but the difference is he doesn’t toe the mark or walk the line. He’s a rebellious, one of a kind superhero, who’ll always do what’s right for the people – but he does it his way. Truth and justice – the BLACK ADAM way. This role is unlike any other I’ve ever played in my career and I’m grateful to the bone we’ll all go on this journey together. BLACK ADAM 12.22.21 ⚡️ Huge thank you to my friends, @jimlee and @bosslogic for this first time ever bad ass collaboration.

Johnson’s Instagram post also comes with the first official poster for Black Adam. A collaboration between illustrator Bosslogic and DC Comics co-publisher and chief creative officer Jim Lee, the poster features a concept art of Johnson as Black Adam, who was originally created by Otto Binder and C. C. Beck as a one-time villain in the first issue of Fawcett Comics’ The Marvel Family released in December 1945.

But since the turn of the 21st century, DC Comics writers Jerry Ordway, Geoff Johns, and David S. Goyer have redefined Black Adam as a corrupted antihero attempting to clear his name and reputation. And based on the caption in Johnson’s Instagram post, it looks like the Black Adam movie will feature the anti-hero version of the character.

“BLACK ADAM is blessed by magic with the powers equal to SUPERMAN, but the difference is he doesn’t toe the mark or walk the line,” Johnson wrote of his comic book role. “He’s a rebellious, one of a kind superhero, who’ll always do what’s right for the people – but he does it his way. Truth and justice – the BLACK ADAM way.”

Johnson last starred in the Fast & Furious spinoff movie Hobbs & Shaw, and will be next seen in Jumanji: The Next Level, opening in U.S. theaters on December 13th.