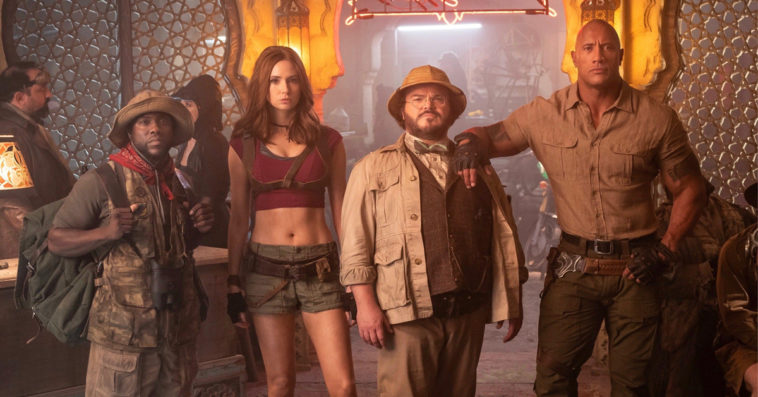 The magical and twisted world of Jumanji is welcoming two new players in the upcoming movie Jumanji: The Next Level.

On Monday, Sony Pictures and Columbia Pictures released the trailer for the movie, and by the looks of it, the sequel to 2017’s Jumanji: Welcome to the Jungle is going to live up to its title.

Everything you know about Jumanji is about to change… ? Watch the trailer for #JUMANJI: The Next Level now and see it in theaters this Christmas! ?? pic.twitter.com/aorKwfVUXR

The three-minute video starts with a revelation that Spencer (Alex Wolff) actually kept the remaining pieces of the Jumanji video game from the first movie. Seemingly missing the bond he once shared with his friends, Spencer, who now lives with his grandfather Eddie (Danny DeVito), repairs the video game and gets sucked into the world of Jumanji once again.

Spencer’s friends Bethany (Madison Iseman), Fridge (Ser’Darius Blain), and Martha (Morgan Turner) make a surprise visit at Eddie’s house to catch up with Spencer. But when the trio goes to the basement to finally see their friend, they are greeted with a running Jumanji video game with Spencer nowhere to be seen. To save Spencer, they decide to re-enter the video game. But they aren’t the only ones who get transported to Jumanji, as Eddie and his visiting friend, Milo (Danny Glover), are also pulled into the game.

Martha is the first one to arrive in Jumanji, and just like in the 2017 movie, Martha’s avatar is still the martial artist and dance fighter Ruby Roadhouse (Karen Gillan).  In the 2017 film, Fridge’s avatar was Mouse (Kevin Hart), but this time around his character is Shelly (Jack Black), Bethany’s previous avatar.

Meanwhile, Eddie’s avatar is Dr. Smolder Bravestone (Dwayne “The Rock” Johnson), the character of his grandson Spencer during his last trip to Jumanji. Lastly, Milo is going to play the game as Mouse. For some reason, Bethany has not been seen since the rest of the characters arrived in Jumanji.

After being welcomed by Nigel (Rhys Darby), the in-game non-playable character guide in Jumanji reminds the players that their “next adventure is even more challenging” than their first trip to Jumanji. And based on the action-packed montage at the end of the trailer, which features wild ostriches, huge snakes, and terrifying baboons, it seems that Nigel is telling the truth.