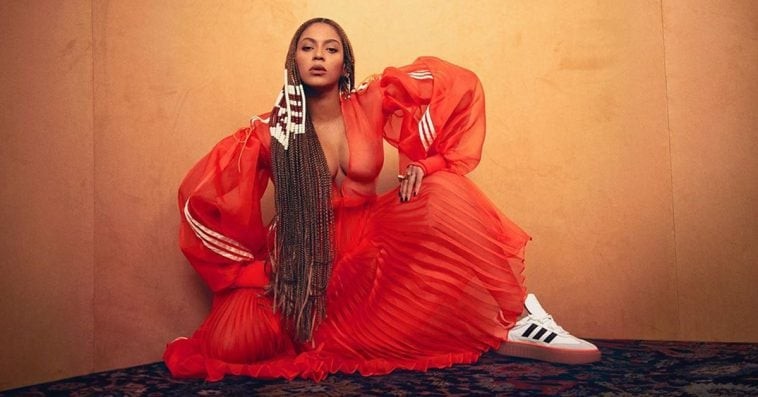 The much-awaited Adidas x Ivy Park collection is finally launching next week, and to get fans more excited about it, Beyoncé has dropped a video teaser featuring some of the items from the apparel and footwear selection.

Released in the wee hours of Wednesday night, the minute-long teaser opens with a series of empowering voice-overs like “I find love in everything I do” and “These barriers are not going to stop me,” as shots of Beyoncé and other models grooving around Los Angeles flash on the screen.

Collection ambassadors Ebonee Davis, Adonis Bosso, and K-pop star CL are seen modelling a wide variety of tracksuits, leggings, cropped tops, and sneakers in black/white and maroon/orange color palettes. Beyoncé, meanwhile, is seen sporting a number of different outfits, including an orange and maroon tracksuit, a ruched orange one-piece with an oversized cape, and a black and white tracksuit with statement shoulders, joggers with a split-hem, and Adidas’ classic side stripes.

In addition to the video, Beyoncé also took to Instagram to share two photos of herself wearing items from the collection.

In the first picture, Beyoncé is seen on a lowrider bicycle while wearing a maroon bodysuit with puffed sleeves and an orange-lined, plunging collar. Matching her sexy top is a maroon and orange sock boots with the words Ivy Park emblazoned on it.

The second image shows Queen B in an orange sheer, pleated dress with a deep v-neckline and puff sleeves that feature the signature Adidas stripes. She’s also wearing the Ivy Park version of the classic Adidas Samba silhouette, which has a white leather upper, Adidas’ signature three-stripe design in burgundy, and an orange lining just above the gum sole.

Introduced in 2016, Ivy Park was co-founded by Beyoncé and Topshop owner, Philip Green. But after Green was named in the UK parliament as the subject of sexual and racial abuse claims, Beyoncé’s Parkwood Entertainment acquired full control of the brand in 2018.

Fast forward to April 2019, the singer announced that she’s relaunching Ivy Park with Adidas as its partner. As part of that deal, Beyoncé now serves as a creative partner for the German sportswear company and helps develop new athletic and lifestyle products for the brand, including new footwear and apparel.

In an interview with Elle magazine last month, Beyoncé revealed that the relaunched Ivy Park brand would be gender-neutral. “I focused on designing a unisex collection of footwear and apparel because I saw so many men in IVY PARK,” explained the music icon. “The way they have embraced the brand is an unexpected gift. I appreciate the beauty of gender-neutral clothing and breaking the so-called fashion rules.”