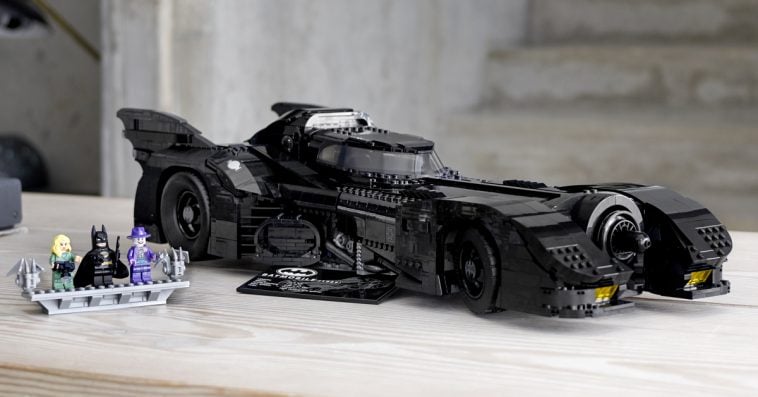 LEGO is releasing a brick model of the iconic 1989 Batmobile in celebration of the 30th anniversary of the Tim Burton-directed movie Batman.

The badass-looking toy car is also equipped with two non-shooting machine guns hidden under the hood, which are activated by rotating the turbine exhaust at the back. It also boasts two decorative grappling hooks, batwings, wheel trims with the Bat logo, and specially designed tires for the front wheels.

For ease of viewing from any angle, the LEGO 1989 Batmobile also comes with a brick-built rotating display stand with an attached information plate containing statistics and fun facts about the legendary vehicle.

The LEGO set also includes minifigures of The Joker, Vicki Vale, and of course, Batman with a cape that matches his 1989 movie outfit. Also included in the set are a brick-built minifigure display stand and other accessories like Batman’s Batarang and gun, The Joker’s gun, and Vicki Vake’s brick-built camera.

Measuring over 4 inches high, 23 inches long, and 8 inches wide, this sleek and curvaceous toy car is perfect for display at home or in the office.

Priced at $249.99, the LEGO 1989 Batmobile will be available directly from LEGO stores and LEGO.com starting November 29th. And since it’s a part of LEGO Black Friday events, those who purchase the set between November 29th and December 5th will receive an exclusive mini replica of the original model as a free gift, while supplies last. Check out the freebie in the gallery below: