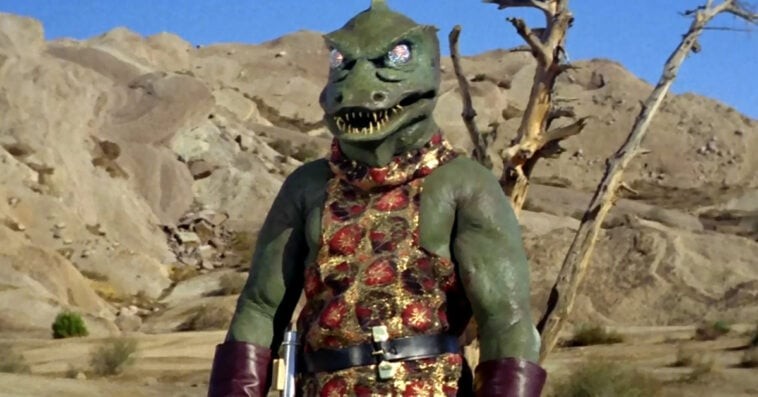 Star Trek’s The Gorn were at the center of the heartbreaking penultimate episode of Star Trek: Strange New Worlds season 1 in June 2022. But not all Star Trek fans are aware that the Gorn have been part of the beloved sci-fi franchise since the 1960s. Below is everything we know about the ruthless alien race.

Table of Contents show
About Star Trek’s The Gorn
Which original Star Trek episode has the Gorn?
Other Gorn appearances in Star Trek
Who played the original Gorn?
Who are the Gorn in Star Trek: Strange New Worlds?
When are the Gorn coming back?
Did Gorn join the Federation?
Are the Gorn part of the Klingon Empire?

About Star Trek’s The Gorn

The Gorn are a warp-capable, cold-blooded species whose interstellar government is known as the Gorn Hegemony. The Gorn homeworld, meanwhile, is called Gornar, a.k.a also known as Tau Lacertae IX.

In Star Trek, the Gorn are usually depicted as reptilian-looking creatures with red blood and green, rubbery skin. Their mouths are equipped with a set of sharp teeth while their hands and feet have razor-sharp claws that they use to attack their victims or protect themselves. In the mirror universe, the Gorn are compared to that of the extinct Velociraptor, based on their size and bite radius.

The Gorn appear to be stronger and have greater stamina than most humanoids, but they are slower and less agile. Some Humans think the Gorn are primitive and unintelligent, but the truth is they are just as smart as Humans. In fact, as of the late 23rd century, much of the Gorn technology, including Gorn ships and Gorn weapons, was on par with that of Starfleet.

The Gorn have at least two genders: male and female. And just like Humans, they also get married. Despite the similarities of their culture with that of Humans’, the Gorn are considered one of the most brutal races in the universe, thanks to their vicious life cycle. The Gorn hatch from parasitic eggs that incubated inside humanoid hosts. When ready, the Gorn hatchlings would violently rip their way out from the body of their host, killing their hosts in the process. Due to their biological makeup, both the Gorn eggs and hatchlings were invisible to sensors.

In the first episode of Strange New Worlds, La’an Noonien-Singh (Christina Chong) mentioned that aside from the Gorn using their captives as “breeding sacks”, they also have their victims be hunted as a sport before being fed to infant Gorn. As part of a ritual, the final survivor would be spared, but only to be placed in a life raft and abandoned in space.

Which original Star Trek episode has the Gorn?

The Gorn first appeared in the 1967 Star Trek: The Original Series episode Arena. In the episode, a Gorn ship attacked a Federation outpost on Cestus III after the officers aboard the space vessel found the outpost encroaching on their territory. The Enterprise crew led by Captain James T. Kirk (William Shatner) pursued the Gorn’s ship to an unknown part of the galaxy, where the Metrons beamed both the Gorn captain and Captain Kirk to a nearby planet for a fight to the death. Captain Kirk ultimately won the battle, but in a move of compassion, he argued for the Gorn captain to be released at the end of the fight scene.

Watch the face-off between the Gorn captain and Captain Kirk in the video below:

Other Gorn appearances in Star Trek

Since that 1967 episode, the Gorn have made several appearances in different series in the Star Trek universe. In the 1973 Star Trek: The Animated Series episode, The Time Trap, a Gorn served as a member of a council made up of various species in the pocket dimension Elysia. Also, in the Mirror Universe, years before Kirk would encounter the Gorn, Jonathan Archer (Scott Bakula) encountered a Gorn in the 2005 Star Trek: Enterprise episode In a Mirror Darkly, Part 2.

In 2017’s Context Is for Kings, the third episode of Star Trek: Discovery, it was revealed that Captain Gabriel Lorca (Jason Isaacs) had a Gorn skeleton in a USS Discovery laboratory. A Gorn wedding was also featured in the 2020 Veritas episode of Star Trek: Lower Decks and a Gorn chef was revealed to be running the restaurant Mr. Krada Leg in the show’s 2021 episode An Embarrassment of Dooplers.

Who played the original Gorn?

The original Gorn was portrayed by multiple people, including Bobby Clark, Gary Combs, and Bill Blackburn. Ted Cassidy, who was known for his deep voice, was the one who provided the voice for the original Gorn.

Who are the Gorn in Star Trek: Strange New Worlds?

As mentioned above, the latest appearance of the Gorn in Star Trek was in the 2022 Strange New Worlds episode All Those Who Wander. The episode revealed a lot of new things about the biology and life cycle of the Gorn, including the species’ fast and aggressive quadrupedal hatchlings, who develop ducts by their mouths that enable them to spit venom.

In the episode, Hemmer (Bruce Horak) saved Nyota Uhura (Celia Rose Gooding) when a Gorn attacked and spit venom that hit him instead of her. The Enterprise crew led by Christopher Pike (Anson Mount) initially believed that the Gorn’s venom would only blind or burn would-be victims, but they later found out that the venom actually turns the victim’s body into a host for Gorn, causing the deadly species’ babies to burst out of the host’s body.

Realizing what would happen if he didn’t take the matter into his own hands, Hemmer walked out into a frigid environment in order to stop the lethal Gorn hatching within his body and ultimately stepped off a cliff to prevent the Gorn babies inside him from bursting out and killing everyone.

When are the Gorn coming back?

In an interview with Screen Rant on Star Trek Day in September 2022, Chong confirmed that the Gorn are returning for season 2 of Strange New Worlds. “Yes, we will see the Gorn in season 2,” said the actress. “But this time, I feel like [my character] La’an has overcome a lot of her trauma [caused by the Gorn]… she’s faced her worst fears. So now it’s about what can they do as a team?”

Strange New Worlds season 2 doesn’t have a release date yet, but it is expected to premiere on Paramount+ sometime in 2023.

Did Gorn join the Federation?

Are the Gorn part of the Klingon Empire?

Though the Klingons successfully conquered the Gorn Hegemony after the Klingon-Gorn War between 2386 and 2403, the Gorn were given self-rule as long as they stayed loyal to the Klingons.