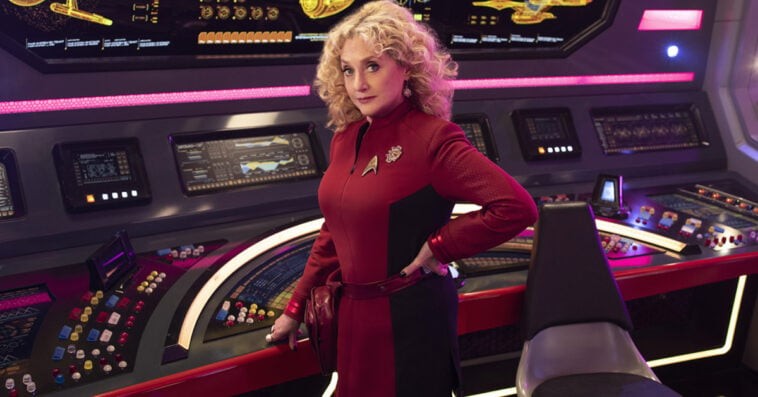 Oscar-nominated actress Carol Kane is beaming aboard the USS Enterprise in season 2 of Star Trek: Strange New Worlds. Her casting was announced during the show’s panel for Star Trek Day last September 8th.

Kane will portray the recurring role of Pelia in the sophomore run of the Paramount+ series. According to the character’s official description, Pelia is a highly educated engineer who “suffers no fools” and solves problems “calmly and brusquely, thanks to her many years of experience.” A photo of Kane as Pelia can be seen at the top of the article.

Kane rose to prominence in the 1970s and 1980s in films such as Dog Day Afternoon, Annie Hall, The Princess Bride, and Hester Street, for which she received an Academy Award nomination for Best Actress for her performance as Gitl.

Kane also appeared in the sitcom Taxi in the early 1980s, in which she portrayed Simka Gravas, the wife of Andy Kaufman’s Latka Gravas. She won two Emmy Awards for her performance in the show.

From 2015 to 2020, Kane played the series regular role of Lillian Kaushtupper on the Netflix series Unbreakable Kimmy Schmidt. The actress can also be seen on Amazon Prime Video’s Hunters, in which she appears as Mindy Markowitz.

The two-minute clip opens with Erica Ortegas (Melissa Navia) putting on the final touches of her disguise as a Kalar / Kalaran. For the first time since she came aboard the Enterprise, Erica is going to be part of a mission’s landing party ― or at least that’s what she thought.

“Most of the time I fly the ship, which is cool, but can get boring,” Ortegas says in her personal log, referring to the Enterprise. “Today is different. Rigel VII’s atmosphere is a hot mess of wind shear, exotic radiation, and heavy particles that jam the sensors on our shuttles. Piloting down takes incredible skill, which I have, but the best part is, I’m with the landing party. Something I almost never get to do.”

But before the landing party steps into the shuttle, Spock (Ethan Peck) informs Christopher Pike (Anson Mount) that debris from a likely “impact between two large celestial bodies that orbited Rigel VII several years ago” may cause the Enterprise to be unstable. This threat requires manual adjustments to the Enterprise every 20 minutes, requiring Ortegas to stay on the Enterprise to keep it safe.

So, as much as Ortegas is excited to be with the landing party, she has no choice but to stay on the ship. See how upset she is with the sudden change of plan in the video below:

Paul Wesley is also returning to the show next season to reprise his role as James T. Kirk, a lieutenant on the U.S.S. Farragut. Co-showrunner Henry Alonso Myers told TVLine in August that this younger version of the iconic character is “not yet the person who he is going to be” and “has some stuff to figure out before he becomes that person.”

Star Trek: Strange New Worlds season 2 doesn’t have an exact release date yet, but it is scheduled to debut on Paramount+ sometime in 2023.