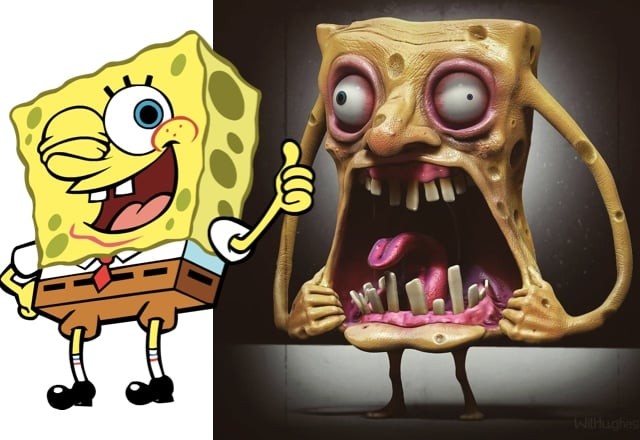 Cartoon characters are often portrayed in uplifting environments and endearing situations. However, Australian digital artist, Wil Hughes, is about to change all that by throwing fear, and maybe even a little bit of revulsion into the mix. To that effect, Wil Hughes has a special knack for transforming innocent pop culture icons into creatures from your deepest darkest nightmares. Are you ready to see Spongebob, Mr. Krabs, and even Mr. Bean in hair-raising 3D form that is super close to real life? If yes, then read on. 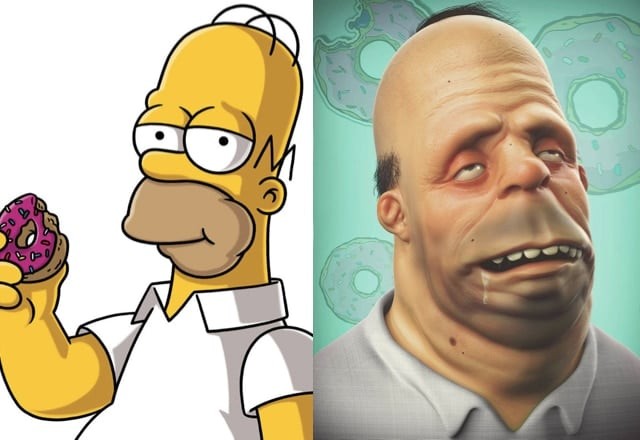 The Simpsons never fail to give viewers a dose of dark comedy with their hilarious antics. Homer loves donuts and so does his realistic counterpart. Look at him, just drooling at the thought of strawberry glazed donuts with sprinkles. That said, he’s probably harmless in real life… just give him his donuts and it’ll all be okay. 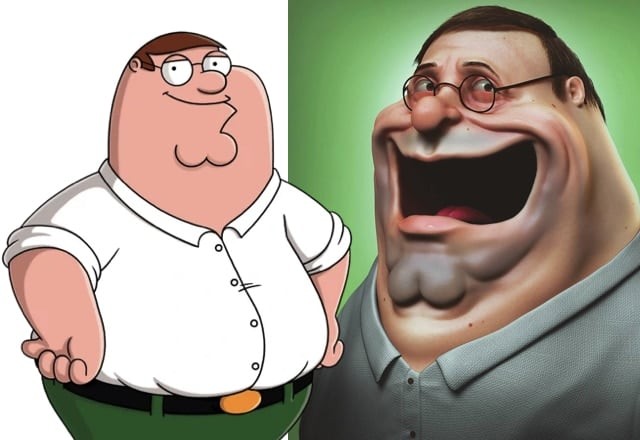 Family Guy is a sitcom that has gained worldwide popularity thanks to its uproarious escapades, courtesy of Peter Griffin, his caring wife, their two teenagers, a clever dog, and a diabolical baby. Raise your hand if you want a 3D remake of this cartoon.

Who lives in a pineapple under the sea? *Gasp* Well, if it’s this guy, then we’re never going to visit him! 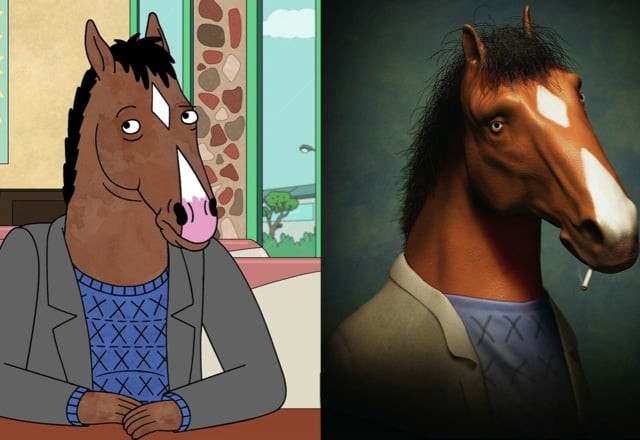 The plot of Bojack Horseman centers around a humanoid horse. If you found yourself hooked on the dark comic premise of the Bojack Horseman series, then you’ll probably love this hyper humanoid version of the four-footed hero. 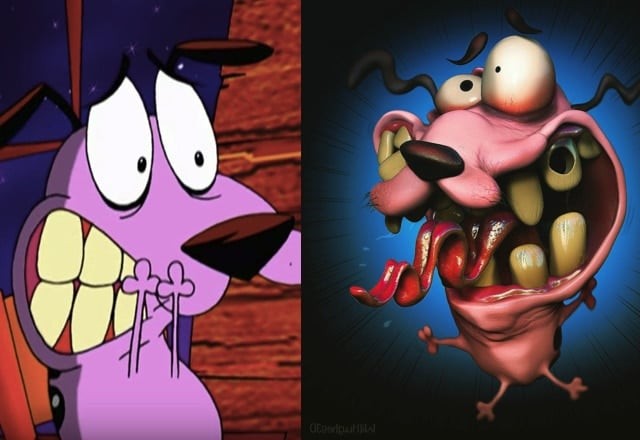 Courage the Cowardly Dog is a classic cartoon character that always faces his darkest fears in the name of love. His iconic catchphrase, “The things I do for love” resonates deeply with viewers. Now, it appears that everyone’s favorite purple canine is faced with the boss level of eerie challenges. Can he conquer this horrific 3D version of himself? We’re rooting for you! 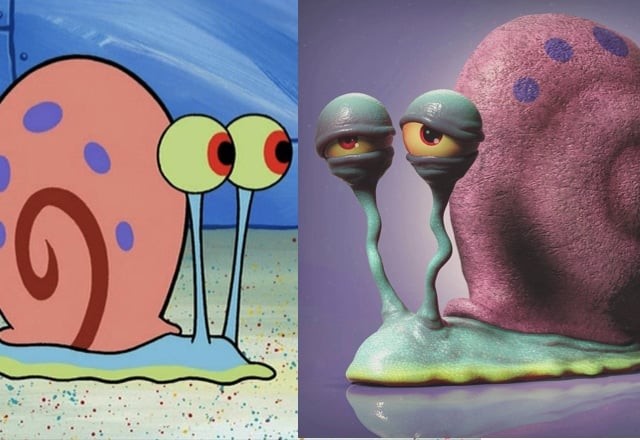 Where would Spongebob Squarepants be without his adorable pet snail? Gary is usually the quiet type who just meows when he’s hungry, wants attention, or is secretly judging you for your life decisions. His 3D version looks like he would most likely do exactly the same. *Judges you in 3D*. 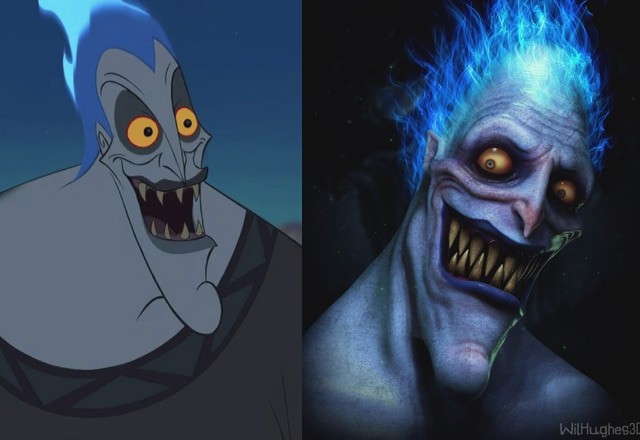 Disney’s Hercules would not have been complete without a flamboyant antagonist to defeat. If the harmless animated Disney design of this mythological fiend didn’t scare you, then the 3D rendering undoubtedly will. That realistic bunch of flaming blue hair and rows of razor-sharp teeth are just the right amount of scary to make you afraid of the dark. Just try not to anger him, so he won’t drag you to the underworld by your ear. 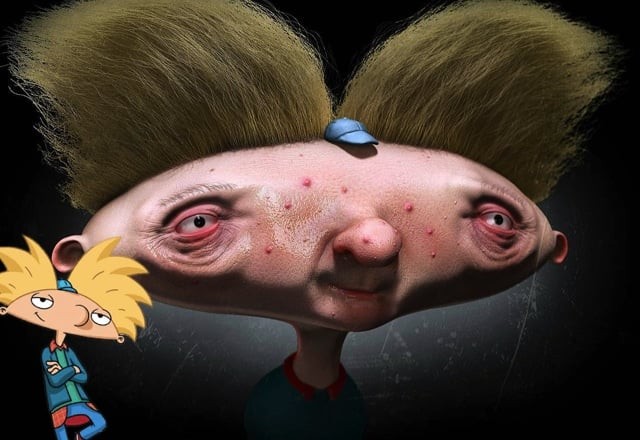 Arnold from the animated series, Hey, Arnold!, is a street-smart kid who tackles life’s daily adventures head-on, with the help of his awesome friends. Wil Hughes took the character’s watermelon shaped head to new heights that will make kids cry, and he made the real life version of Arnold suffer from acne. Hey, Arnold… are you okay? 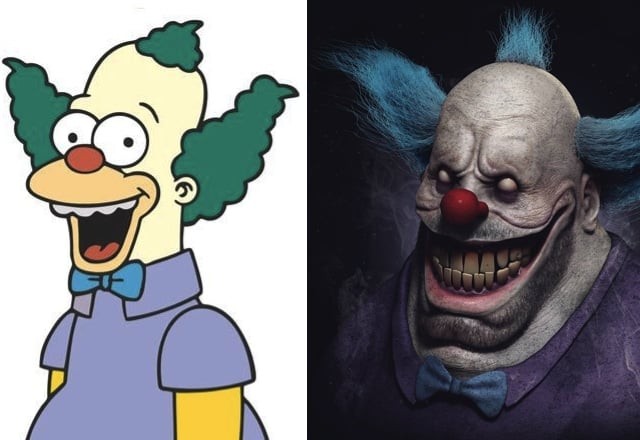 Herschel Shmoikel Pinchas Yerucham Krustofsky, also known as Krusty the Clown, is a character from the Simpsons who would usually get a few laughs out of his audience. Now that we’ve met his 3D parallel, we think we’re done laughing. In fact, we’re going to be very quiet and hide in a faraway land until he goes away. Maybe we’ll even change our names just to be sure. 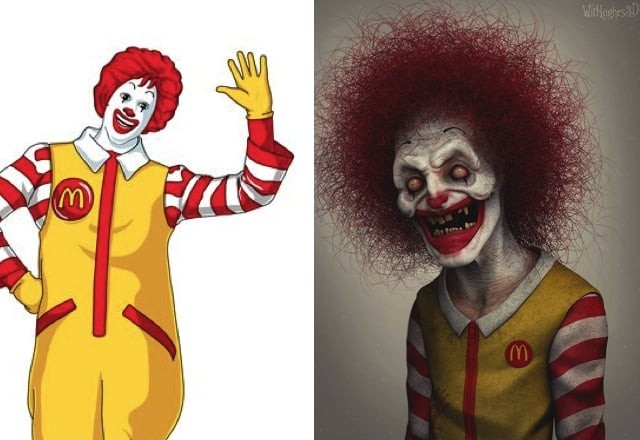 The fast food chain’s iconic mascot usually radiates a message of happiness. This is partly why McDonald’s is such an approachable and popular establishment. But if we take a gander at his counterpart from the depths of nightmare land, we aren’t so sure that we would want a Happy Meal from this clown.

Someone, please call Monsters Inc., and tell them that dear Mike Wazowski has gone rogue. Um, a little help here, Sully? Boo? Anybody?! 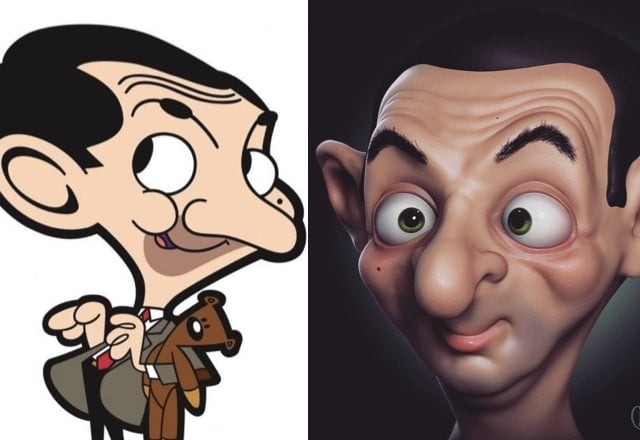 Oh, look, it’s Mr. Bean! This 3D rendering of the famous English comedian doesn’t look scary at all. That’s a relief. Consider it a short respite from the petrifying images you have previously been subjected to. We wonder what a 3D Teddy would look like. Cute, we hope. 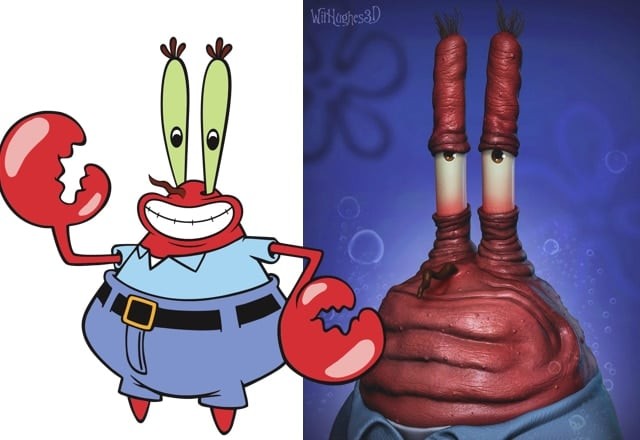 Ah yes, another beautiful day in Bikini Bottom, wherein Mr. Krabs looks unimpressed at the amount of money he earned today. (Admit it, you read that in the French narrator’s voice.) 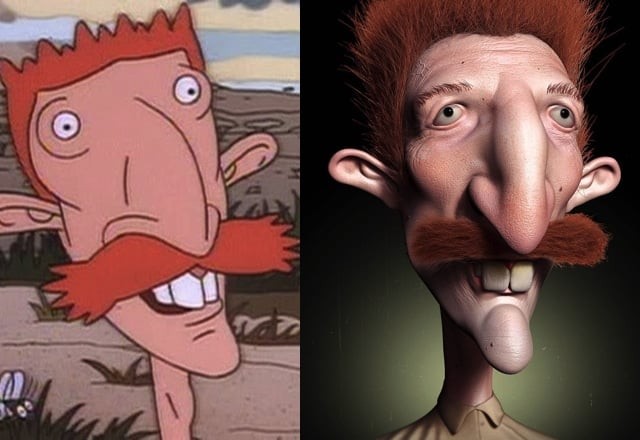 We know what you’re thinking. The original Nigel Thornberry was slightly scary even in cartoon form, why did we have to creep you out with this sinister 3D version? Well, we have our reasons… 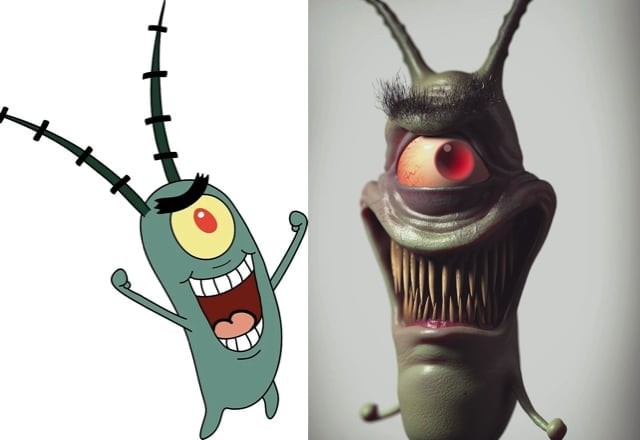 Plankton’s main mission is to steal the secret Krabby Patty formula from the Krusty Krab. The very life-like version of this little antagonist looks like he’s had enough of failing at his wicked ways. On another note, we’ve got a razor and tweezers with your name on it, Plankton… and maybe a toothbrush as well, and some eye cream. 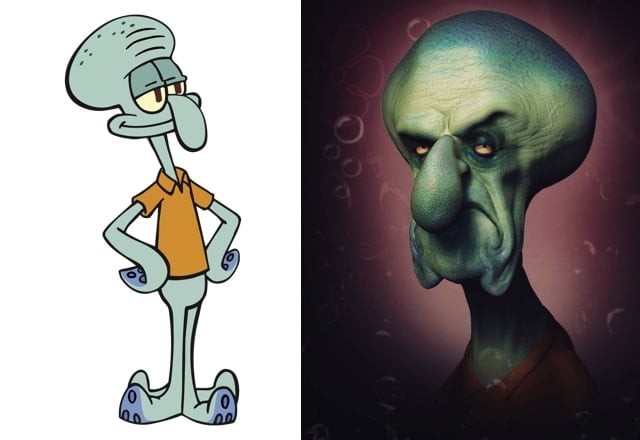 Squidward seems to have found his 3D counterpart, and he’s even angrier, grumpier, and soggier than he is. Oh, and look, he also knows how to raise a brow and give you side-eye. There’s no doubt about it, this is what Squidward would look like in real life. 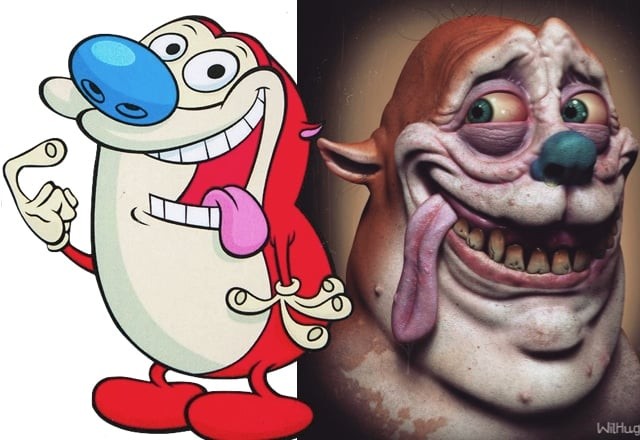 Stimpy from the hilarious duo, Ren and Stimpy, usually has an optimistic persona. You’ll always see him laughing and cracking jokes, but when it comes to this hyper-realistic version of him, we are not expecting any jokes at all. Perhaps, he’ll look better after a nice nap and some dental and skincare.

#18 Ants in My Eyes Johnson 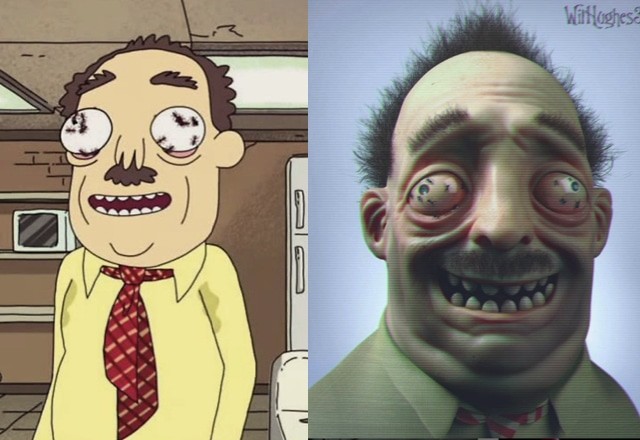 This horrifyingly creepy guy is a character from the animated sitcom, Rick and Morty. We don’t have any words for this remake of the character. Just look away. Avert your eyes or you’ll be scarred forever. 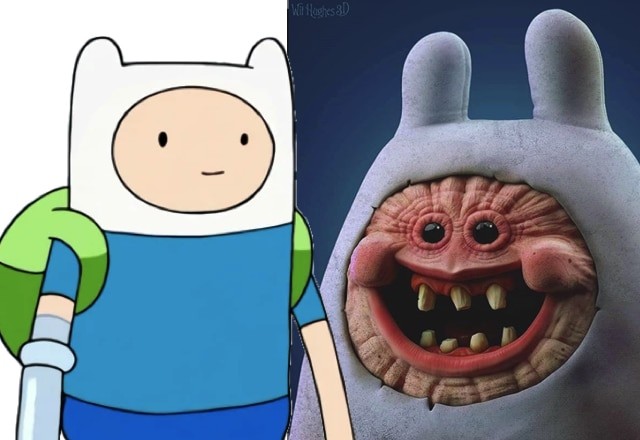 Finn the Human doesn’t seem very friendly in this 3D depiction. Apologies to anyone who is now unable to ever unsee this horrendous skin crawling sight. You’re going to have to stare at cute puppies and kittens for four weeks straight just to erase this image from your mind. 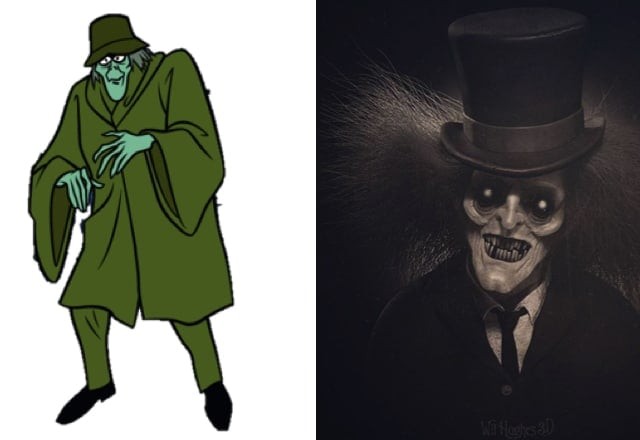 Dr. Jekyll and Mr. Hyde are the most iconic dual characters in the history of cinematic art. Looking at this harrowing take on Dr. Jekyll’s alter ego, we feel the need to lock our doors and hide under the covers. Calling Dr. Jekyll, please stop Mr. Hyde before he scares everyone into hiding for good. 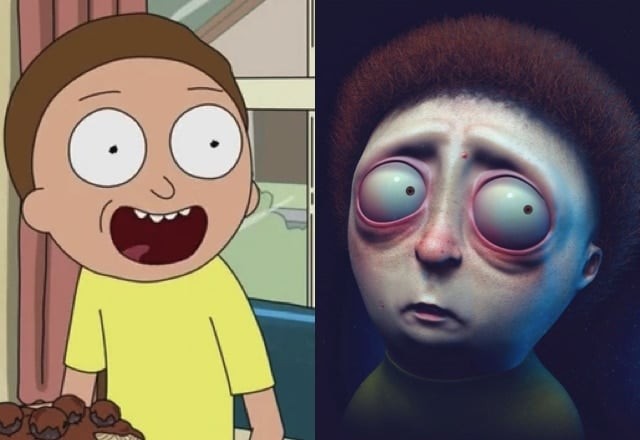 Morty from the animated comedy series, Rick and Morty, isn’t here to scare you. He just needs 8 hours of sleep every night, 8 glasses of water per day, a healthy skin regimen, and hair conditioner. Also, if he were to wear some large opaque sunglasses, that would probably help us too. 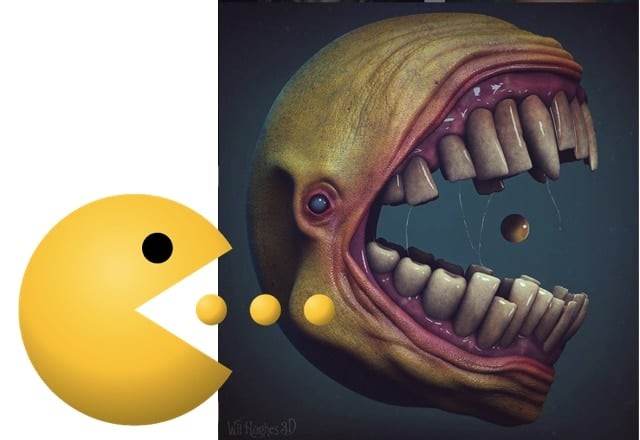 This classic arcade game has one objective: eat all the dots in the maze without getting caught by the ghosts. We hope that the 3D equivalent of this lovable game character eats dots too, and you know… not people. 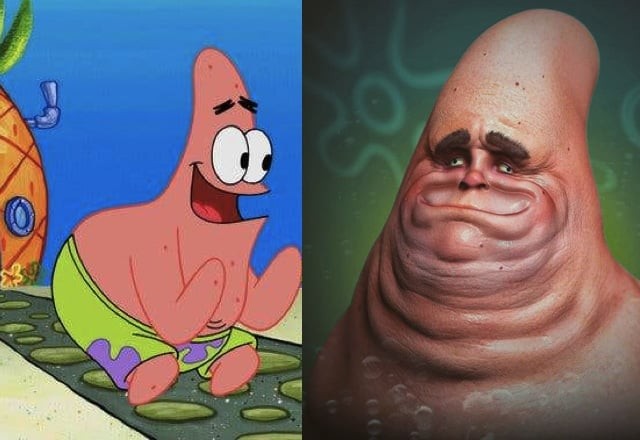 Spongebob Squarepants’ best friend is the happiest starfish is the deep blue sea. His 3D brother looks happy too, we suppose… kind of. Wait, does he have a nose now? 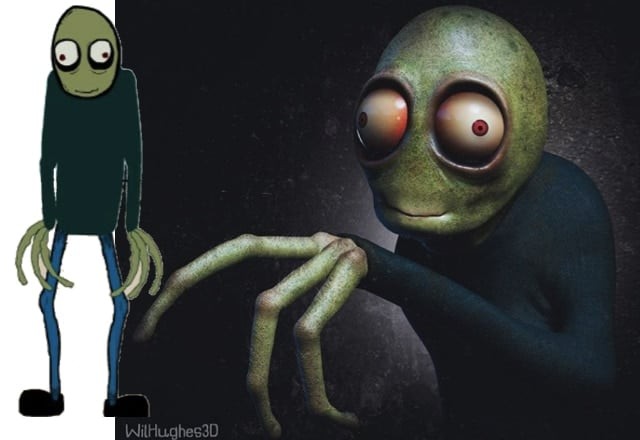 Salad Fingers rose to fame as the lead character in the British web series of the same name, which centers around a mentally troubled person. The bleak setting of the animated web series was enough to bring you to tears. The 3D counterpart of the show’s protagonist reminds you that you should be happy. 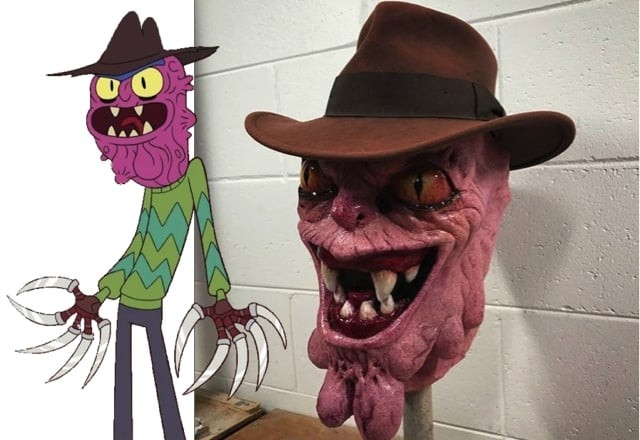 Scary Terry from Rick and Morty is scary indeed. When he gets revamped in 3D style, he’s not just scary. In fact, he’s just downright repulsive, yet we can’t look away. 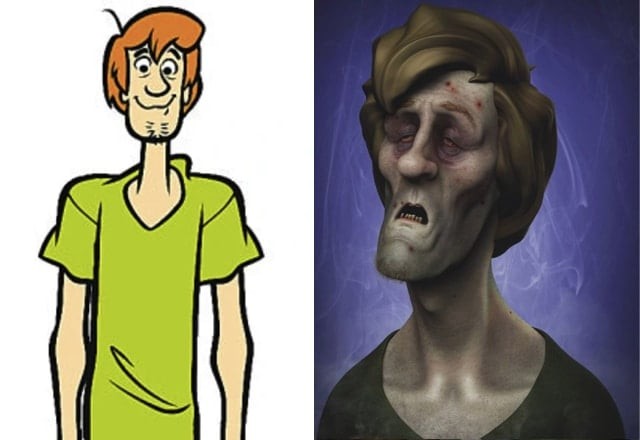 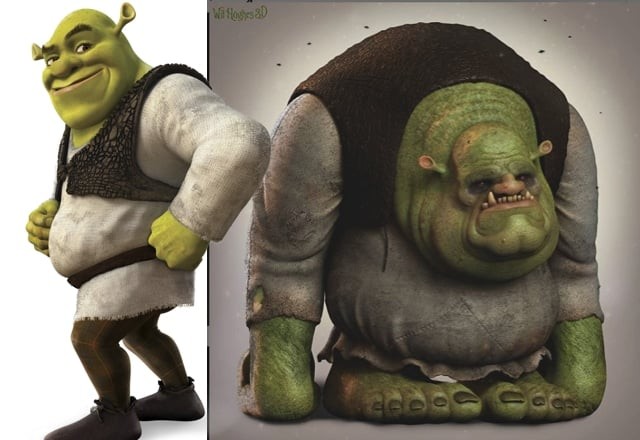 Has anyone seen Princess Fiona? Because she may be the only person who can break the spell and turn Shrek back into his old semi-grumpy, yet loving self. 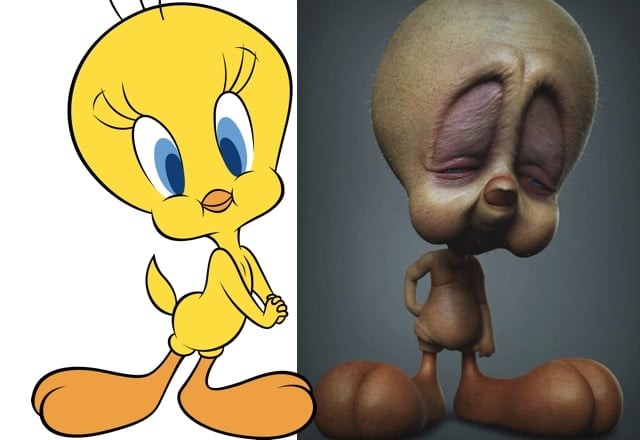 In the sweet words of Tweety: “I’m a tweet little bird in a gilded cage, Tweety’s my name, but I don’t know my age. I don’t have to worry and that is that, I’m safe in here from that old puddy tat.”

While you’re enjoying in your gilded cage, don’t forget to get enough sleep, because you’ve got some dark circles and wrinkles looming over there, Tweety. Beauty rest is key! 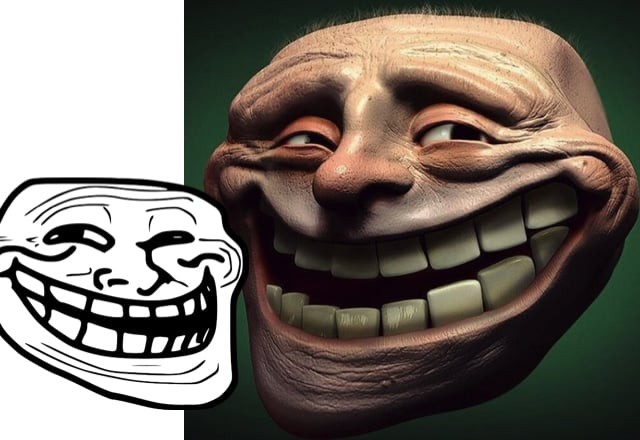 Who could ever forget the most iconic and versatile meme of 2008? The troll face may not have had his own cartoon series, but he’s a legendary animation nonetheless. We love 3D troll face just as much. (Why do we feel like there’s some sarcastic caption about to jump out of this image?). 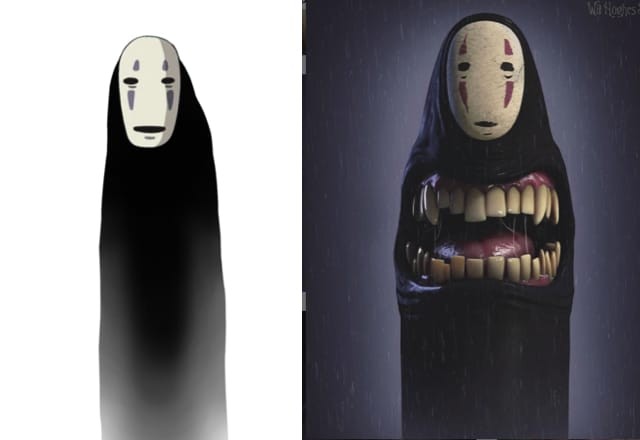 No Face or Kaonashi is an antagonist in the Japanese anime, Spirited Away. This obscure creature is known for ingesting people in order to gain personality traits and physical features. The cartoon character was already scary enough, but just take a look at that 3D version! He/she may not have a face, but we definitely see a whole lot of mouth! (And terrifying rows of teeth, by the way. Maybe that’s how he/she ingests people…). If you’re too scared to sleep tonight, just think of this as an uncut Philadelphia roll with teeth. #sushi