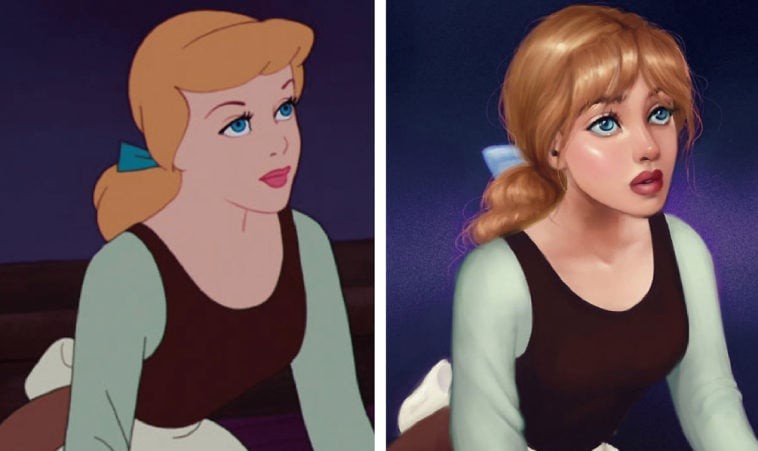 Though animation has evolved so much since its inception, characters from classic animated movies and TV series remain beloved by fans. And because most of those characters were originally illustrated in a non-realistic or semi-realistic style, artist Isabelle Staub has redrawn some of them with more true-to-life features, giving fans a rough idea on what their favorite cartoon characters would look like if they were real people. A lot of Staub’s works feature Disney princesses, but she has also reimaigined Cartoon Network’s The Powerpuff Girls, and Disney Channel’s Kim Possible. Take a look at some of Staub’s fantastic artworks in the slideshow below:

Though Staub’s version of Ariel looks a little bit more mature than Disney’s, there’s no denying that the fan-created incarnation of the Little Mermaid character looks more attractive than the original. Staub’s Ariel has bushier eyebrows, lovelier eyes, and shinier red locks. The artist also made the mermaid’s lips smaller and rounder, adding a touch of sultriness to the overall appearance of the Princess of Atlantica.

Aurora’s long golden blonde locks look healthier than ever in Staub’s reimagining of the titular Sleeping Beauty. Though brightly colored in the 1959 animated film, Aurora’s hair looked dull, so when Staub illustrated the Disney princess using an intricate drawing style, the artist made the character’s crowning glory shiny and silky. Staub also added some blush to Aurora’s cheeks, matching her rose-red lips.

Belle’s hazel eyes look more alive and her long brown hair appears lovelier than ever in Staub’s version of the Beauty and the Beast character. The princess’ clavicles are also more visible in the fan art than in the 1991 animated classic.

Cinderella was illustrated in a pretty straightforward style in her eponymous 1950 movie, so when Staub sketched her using a more elaborate drawing technique, the results were unsurprisingly stunning. Her blue eyes are now bigger and more expressive, while her jawline and nose appear more defined. The artist also made the princess’ cheeks rosier and her collarbones more evident.

Jasmine’s West Asian charm is highlighted when the Princess of Agrabah was illustrated in a more elaborate drawing style. Compared to Disney’s original version, Staub’s reimagining of the character has lusher eyelashes, silkier locks, and more glowing olive skin. For some reason, however, Staub’s version of Jasmine looks a little bit older than the one we met in the 1992 film Aladdin.

Though Mulan already looks beautiful in her 1998 eponymous movie, Staub made the character appear more attractive in her artwork by giving her shiny smooth tresses, glass skin face, pouter lips, and more expressive eyes. The way the artist drew the character’s nose was also a huge upgrade from its rather basic depiction from the film.

Since Moana is the most recent Disney princess to be introduced, she’s illustrated with so much more details than her predecessors. So, in Staub’s version of the character, the artist didn’t make so many changes to the character’s look. While everything seems pretty similar to the original, the drawing is a little bit blurry, which gives the artwork an exquisite dreamy vibe.

In her eponymous 1995 movie, Pocahontas was illustrated without so many details. So, when Staub reimagined the Disney princess with realistic features, the character appears more beautiful and vigorous than ever. Her hair looks silkier and smoother, her tanned skin more glowing, and her eyebrows thicker. Pocahontas’ dark brown eyes also look more expressive after getting drawn more elaborately.

Snow White got a little makeover when Staub reimagined the Disney princess with realistic features. Though her cheeks remain rosy, they appear not as chubby as before. Her brown eyes look more vivid, thanks to Staub’s detailed drawing style. Snow White’s eyebrows are also noticeably thicker and her original short wavy black hair now reaches her shoulder. Lastly, the character’s pale white skin is colored more accurately, as it appeared slightly yellowish in the 1937 animated classic Snow White and the Seven Dwarfs.

Tiana already looks lovely in the 2009 animated film The Princess and the Frog, but the character got even lovelier when Staub reimaigined her with more lifelike features. As seen in the fan art above, the Princess of Maldonia was illustrated with glowing skin, bushy eyebrows, and plumper lips. Disney’s version of Tiana has wavy black hair, but in Staub’s artwork, the character was drawn with curly locks to highlight her African American roots even more. For some reason, however, Tiana’s adorable dimples are nowhere to be seen in Staub’s illustration.

Esmeralda from the 1996 animated film The Hunchback of Notre Dame got more alluring when Staub reimagined her with sparkling green eyes, luscious lips, and more defined nose. The character’s long wavy black hair was also drawn more intricately, adding an extra layer of vibrance to her overall look.

In the 2001 animated film Atlantis: The Lost Empire, Kida’s long white hair looks dry and stiff. But in this fan art, the character’s locks appear relaxed and silky. Though Staub kept Kida’s chiseled jawline, the Princess of Atlantis’ lips were noticeably altered to make it look rounder and softer. Her eyes were also made more enchanting, as they appear to be glowing in the artist’s version of the heroine.

In the 1997 animated film Hercules, Megara was illustrated with an insanely slim figure, so Staub made sure that her version of the snarky femme fatale has a realistic body proportion. Aside from getting a plumper waist and rounder arms, Staub’s reimagining of the character was also given softer facial features, which look way more realistic than her extremely angular face in the movie.

Nani looks a little bit plain in 2002’s Lilo & Stitch, so when Staub created her own version of Lilo’s elder sister, the artist made the character appear more three-dimensional by giving her highly detailed locks, glossy facial skin, and moist lips.

Anastasia was originally illustrated with an elongated face, so when Staub reimagined the Fox Animation Studios character, the artist tried to enhance it by drawing her with a slightly rounder face. The artist also added more details to character’s eyes, making them more evocative. Aside from Anastasia’s facial features, the character’s long auburn locks were also made more beautiful by Staub by giving them more shine and volume.

Just like her original appearance from the 1998 TV series The Powerpuff Girls, Staub’s version of Blossom has pink eyes and long red-orange hair. Though this drawing of Blossom doesn’t feature her iconic triangular bangs and signature red bow, the artist put some freckles on the character’s rosy cheeks to achieve a more realistic look.

In the cartoons, Bubbles has short blonde hair with two pigtails. But in Staub’s fan art, the character was illustrated with long wavy locks, making her appear more mature. Though this realistic version of Bubbles appears more grown-up, the character’s sweet personality isn’t really gone.

If Buttercup was illustrated as a real person, then this is what she would look like. Rocking a faded neon green bob, the toughest fighter in the Powerpuff Girls trio looks fierce in her black t-shirt, which she matches with a thick black choker.

Drawn in cartoon style, Disney Channel’s Kim Possible has a very tiny waist. So, when Staub illustrated the character using her signature drawing style, she added some inches to the teen crime fighter’s torso for a more realistic look. The artist also made the character’s chest fuller and her red hair silkier and longer than the original.