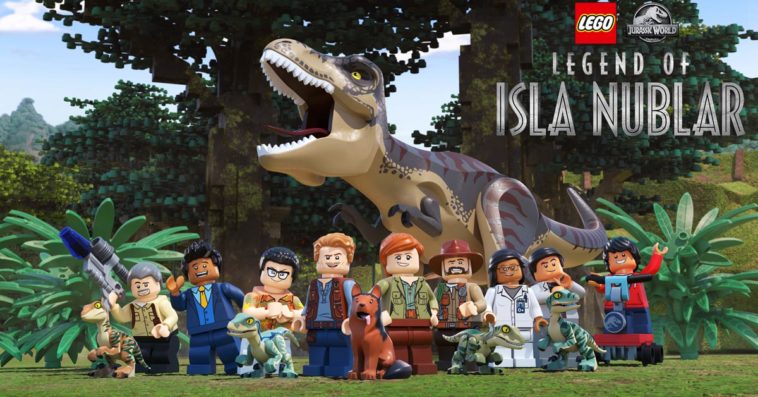 Universal Brand Development and the LEGO Group have partnered once again for an upcoming miniseries called LEGO Jurassic World: Legend of Isla Nublar.

Newly hired animal behaviorist Owen Grady and Assistant Manager of Park Operations Claire Dearing team up to deal with everything the Jurassic World park throws their way: runaway dinosaurs, ongoing constructions, tourists, unpredictable weather, and an impulsive boss. Owen, Clair, and the rest of the gang must also stop a mysterious saboteur from finding a legendary treasure and destroy Jurassic World forever.

In line with the upcoming debut of LEGO Jurassic World: Legend of Isla Nublar, Universal and LEGO are also releasing four new building sets based on the new miniseries. These sets are Dilophosaurus on the Loose, Baryonyx Face-Off: The Treasure Hunt, Triceratops Rampage, and T. rex vs Dino-Mech Battle.

The Dilophosaurus on the Loose set is a 168-piece playset that includes minifigures of Owen, Hudson Harper, and a park worker. It also features a Dilophosaurus toy figure, a drone helicopter toy, and a dinosaur-head-shaped market stall. The drone features four spinning rotors and a net shooter function to aim at the Dilophosaurus dinosaur model.

The Baryonyx Face-Off: The Treasure Hunt set, meanwhile, features minifigures of Owen, Claire, and new characters Danny Nedermeyer and Sinjin Prescott. The set also includes a Red the Dog figure, an offroader, and a trailer with buildable antenna and assorted plant elements on the exterior. To complete the jungle and treasure hunt scenes, the set also has a buildable palm tree, hidden treasure chest with a reveal function and six gems and two gold-colored bar elements inside.

The Triceratops Rampage set boasts an Egg Spinner ride with 3 dinosaur-egg seats for minifigures and a spinning function. There’s also a gate and a queuing area for the ride. The set also includes a posable Triceratops toy dinosaur figure, a collapsible fence, and a minifigure buggy to play out a dinosaur escape and pursuit. Also included in the set are minifigures of Owen, Simon Masrani, Allison Miles, and a tourist.

These sets, which will retail for $19.99 to $89.99 each, won’t hit the store shelves until this fall. But they will be showcased to buyers, media, and influencers for the first time at American International Toy Fair in Booth 1335 of Hall 3B at the Jacob K. Javits Convention Center in New York City on February 16th to 19th.