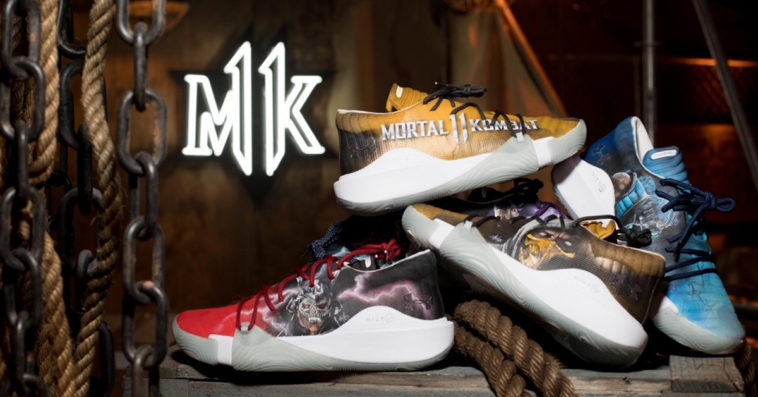 Following its successful partnership with Dwayne Johnson for its Project Rock product line, Under Armour has now teamed up with the Mortal Kombat video game franchise to promote its latest footwear collection.

These original hand-drawn designs were created by sneaker artist and MK Kollective ambassador Dan Gamache of Mache Custom Kicks. Gamache founded Mache Custom Kicks in 2004 after he became disenchanted with the designs and colorways that major shoe brands were putting out. Curious to see if he could come up with a better one, Gamache slathered different shades of purple on a pair of beat up Air Max 90s in his basement, and just like that, Mache Custom Kicks was born.

Since then, Mache Custom Kicks has become one of the premiere custom sneaker designers in the country, giving shoe collectors and fans alike the chance to design their beloved shoes with their favorite pop culture properties. Previous designs created by Mache Custom Kicks feature Spider-Man, SpongeBob SquarePants, James Bond, Starbucks, and a lot more.

Though the Mortal Kombat-themed shoes are undeniably beautiful, it’s still unclear whether they will be replicated or sold given their meticulous and time-consuming production. In any case, Under Armour’s non-Mortal Kombat-themed Anatomix Spawn sneaker line will go on sale starting on January 26th for $110 a pair.

Interestingly, these Mortal Kombat-inspired shoes are just a preview of what’s to come between Under Armour and the video game franchise as the April 23rd release date of Mortal Kombat 11 gets closer.