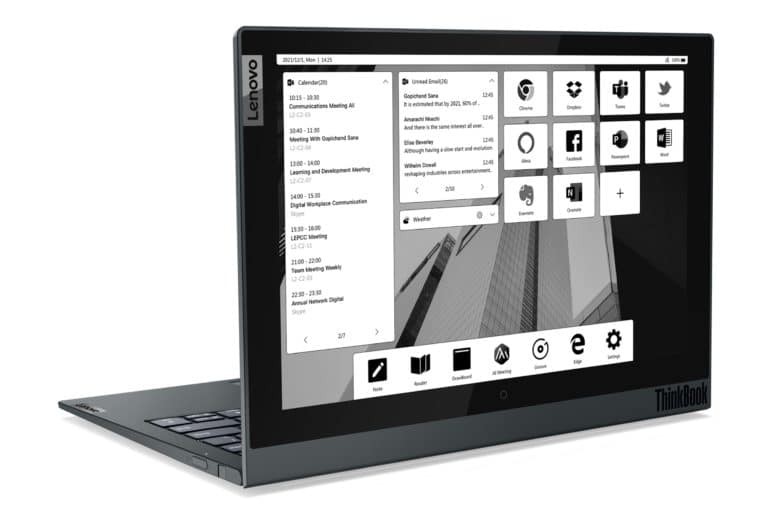 ThinkBook Plus Gen 2 i

Announced at this year’s CES are the new ThinkBook Plus Gen 2 i, ThinkBook 13x, ThinkBook 14p Gen 2, and ThinkBook 16p Gen 2. The second-generation ThinkBook Plus is proud to offer a number of improvements based on real customer experience. To that effect, the dual-display laptop now offers a redesigned E-ink display that offers a 48% screen-to-body ratio with 12 inches of screen real estate compared to the 10 inches of its predecessor.

Users will be able to view a wealth of valuable information on the device’s top E-ink cover including emails, reminders, calendar invites, and more. It can also be used to work on select tasks such as reviewing and annotating presentations, editing word documents, or taking notes during meetings. All without having to open the PC.

The device boasts of an overall thinner and lighter profile, measuring just 13.9mm thin and weighing 1.3kg light. The 13-inch main IPS monitor’s resolution has also been increased to 2560×1600 and now offers a 90% screen-to-body ratio.

The unique laptop is powered by 11th Gen Intel Core processors and supports up to 16GB of RAM and up to 1TB of Gen 4 SSD storage.

Lenovo says the ThinkBook Plus Gen 2 i can run for up to 24 hours when solely using the E-ink screen and up to 15 hours when using the main display. An optional charging mat accessory can also be used to wirelessly charge the device.

At 12.9mm thin, the ThinkBook 13x I is one of the slimmest 13-inch business laptops around. Portable and sleek, it carries much of the same specifications of the ThinkPlus Gen 2 but without the second display on the cover.

You will still get 11th Gen Intel Core processors, up to 16GB of RAM, and up to 1TB SSD storage. Harman Kardon speakers support Dolby Atmos and Dolby Vision while connectivity offerings include Wi-Fi 6 technology. Additionally, the 53Wh battery means it can last for a good number of hours.

Lenovo is introducing two Ryzen-powered ThinkBook laptops, the ThinkBook 14p and 16p. Created with power users in mind. The two share a couple of other specs apart from its AMD Ryzen processors.

Both are capable of up to 32GB RAM and up to 1TB SSD storage. Dual array mics are also present on both laptops and both also have As for graphics, the 14p offers integrated AMD Radeon graphics while the 16p is given the option to upgrade to a next-generation NVIDIA GeForce RTX graphics card for even better performance.

As for the display, the 14p can come in either a 14-inch 2.2K IPS or 14-inch 2.8K OLED panels. The 16p, on the other hand, offers only a 16-inch 2.5K IPS display which can optionally be calibrated to be X-Rite Pantone color certified.

Being the larger of the two, the 16p houses a 70Whr battery while the 14p has a 61Whr battery. Both support Rapid Charge Pro technology.