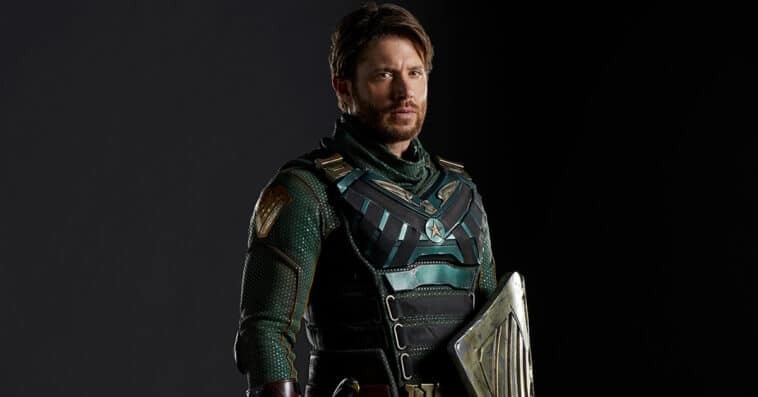 In a couple of photos shared by The Boys social media accounts, Ackles is seen wearing a military-inspired, black and green combat suit with touches of gold. He’s also wielding a dented shield and is equipped with an eagle knife strapped to his waist.

Ackles’ Soldier Boy costume was created by Laura Jean “L.J.” Shannon with concept artist Greg Hopwood. In a statement, Shannon explained that Soldier Boy is the “original badass,” so their goal was “to highlight a bygone era of overt masculinity and grit.”

“With that pedigree we dove headfirst into baking in an all-American quality grounded in a military soldier’s practicality with a heavy dose of old school cowboy swagger,” continued Shannon. “We knew that the actor had to have Steve McQueen looks and chops with a John Wayne attitude, luckily Jensen Ackles embodies all of that.”

Showrunner Eric Kripke revealed that “it took six months” before Shannon completed the suit, “but the experience surpassed Jensen’s expectations.” “When I cast Jensen as Soldier Boy, the first thing I said was, ‘I’m most excited for you, because of the amazing process you’ll go through with LJ, our Super Suit designer,’” Kripke recalled. “L.J. has made a work of art that tips its hat to the WWII Soldier Boy from the comics, while taking it in a sleek new direction. And if you think the photos are cool, just wait till you see Jensen in action. It’s one of my very favorite suits. Also, now you can quit clogging my Twitter notifications with demands to see it.”

Ackles shared the photos on his Instagram page and wrote that he loves the suit. A day before he shared the pics of him in full costume, the actor shared a close-up photo of Soldier Boy’s shield.

Soldier Boy is a superhero created by Compound V in the 1940s. After killing more than his fair share of Nazi soldiers in World War II, he became a mainstay of American culture, and one of the first superhero celebrities.

Ability-wise, Soldier Boy is strong and agile and is able to dodge bullets and blows equally easily. In the original Garth Ennis and Darick Robertson comics on which the series is based on, Soldier Boy was the leader of Payback, the premiere group of superheroes before the Seven was formed.

“I think anyone expecting Jensen to show up and be a good guy, they will be disappointed. I’ll say that!” Kripke told Variety last October. “In the comics he’s mostly just kind of bumbling and subservient to Homelander (Antony Starr), I would say. As we’re writing him in this, we’re getting to really talk about the history of Vought because he’s like John Wayne. He’s one of these guys that’s been around for decades of Vought history. And he was Homelander before Homelander, so he’s from a different era, but he’s got the ego and the ambition — it just comes across in a different way because he’s from a different time.”

Filming for season 3 of The Boys is ongoing in Toronto. While an exact release date has yet to be announced, the show could possibly return to Amazon Prime Video in late summer or early fall.