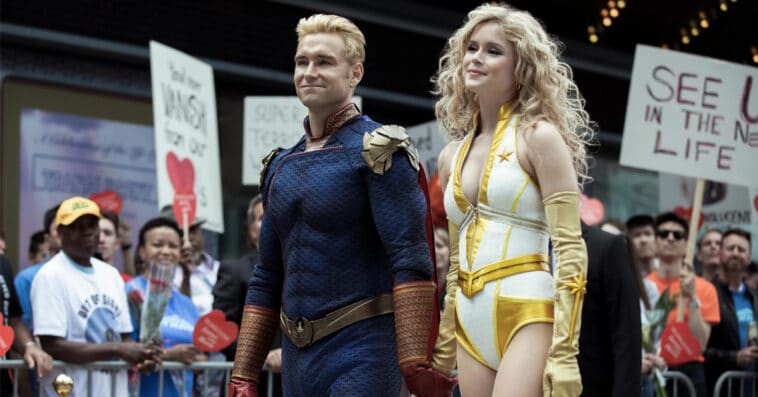 Amazon Prime Video’s The Boys has been known for its outrageous visuals since it launched in 2019, and even though filming for season 3 of the superhero series is still underway, showrunner Eric Kripke has revealed that the upcoming batch of episodes won’t be short of scenes that will leave viewers flabbergasted.

“Every episode we do really get to show the audience something they’ve probably never seen before. And that’s exciting,” Kripke said in a recent interview with Deadline about The Boys season 3. Without giving any specifics, Kripke teased a visual gag in the season 3 premiere that he’s particularly excited for the viewers to see.

“Without giving away any spoilers, I was just in editing yesterday, and we’re doing something here in the season 3 premiere that is not only I think the craziest thing we’ve ever done, it’s got to be up there with the craziest thing anyone’s ever done,” shared Kripke. “Maybe it won’t work. Who knows? But I’m just so high on this gag that we’re pulling off. And it’s certainly something nobody has ever seen before, probably for good reason.”

But just like the show’s first two seasons, The Boys season 3 isn’t all about shock value. Kripke told Deadline that their goal in the upcoming season is to “explore what it means to be in America.”

“A big element of the comics actually are flashbacks to World War II and Vietnam. I always really loved it because you got to see how the superhero phenomenon didn’t just affect the present, but how it affected parts of the past as well,” said Kripke. “And so we have this character, Soldier Boy, played by Jensen Ackles, and he’s been around since World War II and was the first Vought superhero. Through him and through his story, we’re able to explore a lot of the history of the country, really.”

Kripke continued: “I’d say in previous seasons the boogeyman for you to be scared of used to be, ‘The terrorists are coming to get you.’ And now it’s sort of metastasized into, I think, a much more ominous, ‘Your neighbor is coming to get you.’ And that’s scary to me, how politics are turning us on each other. So, we want to explore what it means to be in America, really.”

As mentioned above, filming for season 3 of The Boys is ongoing in Toronto. While an exact release date for the new season has yet to be announced, the show could possibly return to Amazon Prime Video in late summer or early fall.