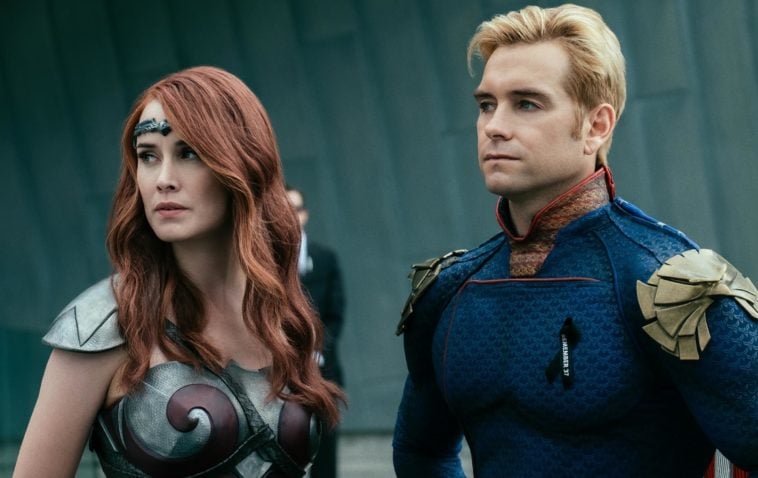 Comic book adaptations are everywhere you look these days on both the big and small screens, but few take as much immense delight in subverting and deconstructing the tropes of the genre as Amazon’s smash hit The Boys, which recently concluded a second season that firmly established it as the crown jewel in the streaming service’s lineup.

The first run exploded out of nowhere when it arrived in July of last year, and quickly gained huge buzz as a deliriously entertaining and gruesomely violent spin on the typical superhero show format, all shot through with a rich vein of jet black humor and a cast that were phenomenal in their roles and more than willing to get their hands dirty.

The Boys had initially spent years stuck in development hell as a feature film, before it was announced in April 2016 that Supernatural creator Eric Kripke was teaming up with Seth Rogen and Evan Goldberg to bring it to television instead. Amazon ended up winning the bidding war and ordered eight episodes, and the show had already been renewed for a second season before the premiere had even aired.

The streaming service were right to show such confidence in the project, because The Boys received rave reviews from fans and critics alike, who praised the imaginative twist on a genre that’s become almost ubiquitous over the last two decades, with the action sequences and visuals also coming in for acclaim along with the foul-mouthed humor and overwhelming sense of irreverence that the cast and crew brought to the material.

In fact, The Boys proved to be so popular that fans started review-bombing it online after the Season 2 premiere dropped in September, because they were furious that Amazon had changed the release model and was making them wait five weeks to get the entire eight episodes instead of unveiling them all at once so they could binge them all in one sitting.

It turned out to be a wise move on the studio’s part, as they reported that viewership numbers for The Boys had increased by almost double over Season 1, and it was the most-watched original show on streaming that didn’t hail from Netflix by quite some distance.

Not only was Season 3 announced almost two months before the second batch of episodes were released, but a spinoff was also confirmed that would take place in a college for Supes. Amazon are clearly intended to position The Boys as one of their major properties, meaning that we’re only at the tip of the iceberg.

Season 2 concluded in fittingly chaotic fashion, shifting numerous pieces across the board and setting the stage for what comes next. So far, Kripke’s former Supernatural collaborator Jensen Ackles is the only new addition to the roster as Soldier Boy, but the scripts are already being hammered out with an eye to kicking off shooting early next year, meaning that it won’t be long until we find out who else will be suiting up to join Billy Butcher and the gang in their continued efforts to wage war against the megalomaniacal Homelander and Vought Industries.