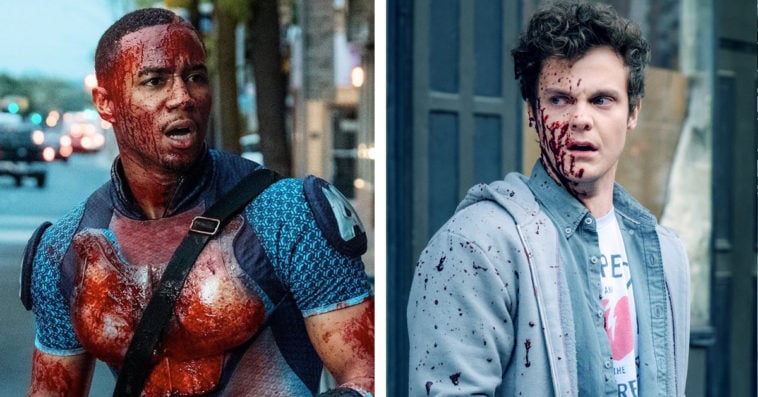 A-Train is turning against Homelander and Stormfront in this week’s season 2 finale of The Boys.

In the trailer for the upcoming episode, A-Train (Jessie T. Usher), who was recently cut out of The Seven, surprisingly reaches out to Hughie (Jack Quaid) and Starlight (Erin Moriarty) to provide some seemingly helpful information in their mission to expose Stormfront’s (Aya Cash) real identity. While this act of kindness initially appears as A-Train’s apology for killing Hughie’s girlfriend Robin (Jess Salgueiro) at the start of season 1, it turns out that the speedster supe is just lending a hand so he can be part of The Seven once again.

“Why are you doing this?” Hughie asks.

A-Train replies, “Because I want back in, so I need her gone.” While the speedster doesn’t reveal who he’s referring to, it seems that the “her” in question is Stormfront, the most recent addition to The Seven.

5-day countdown till the finale. It's gonna be…explosive 💥 #TheBoysTV pic.twitter.com/9ktJXqPwPE

Elsewhere in the trailer, Becca (Shantel VanSanten) escapes the gated community and heads straight to Butcher (Karl Urban) for help after Homelander (Antony Starr) and Stormfront took away her son, Ryan (Cameron Crovetti). To calm her sobbing ex-wife, Butcher tells Becca, “Don’t you worry. I will find your son.”

Whether or not that The Boys will be able to expose Stormfront’s real identity and take back Ryan from Homelander at the end of the episode, the final shots in the trailer reveals that the faceoff between the two camps is going to be an explosive one.

In an interview with TVLine, series executive producer Eric Kripke said that the season 2 finale is going to be a “real sh-t fight,” noting that it’s his “all-time favorite episode of the whole show, both seasons.”

As to why it’s his most favorite hour in the entire series so far, Kripke explained: “It puts, primarily, Butcher in a really dangerous place, because he has this devil on his shoulder, who is his father, and he’s just learned at the end of … episode [7] that there’s no value in doing things the right way by going through the right legal means. The only way to get things done apparently is to be the worst possible person like his father, and he’s heading into episode 8 with that attitude. We should very rightfully worry about Butcher’s humanity and what that means for the rest of the team.”