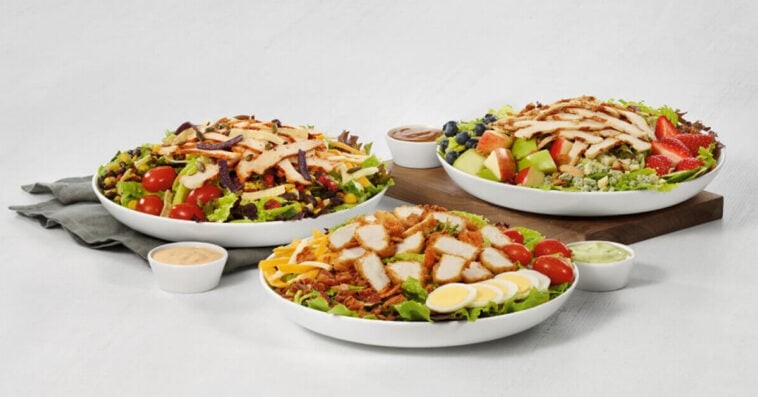 Chick-fil-A is popular for its chicken sandwiches, chicken nuggets, and waffle potato fries, but do you know that the fast-food restaurant chain also serves salads? In rising to the challenge of offering healthier fast food meal options, the eatery developed a number of salads that are prepared fresh every day. If you haven’t tried any of them yet, below is everything you need to know about the salads from Chick-fil-A.

What salads does Chick-fil-A offer? 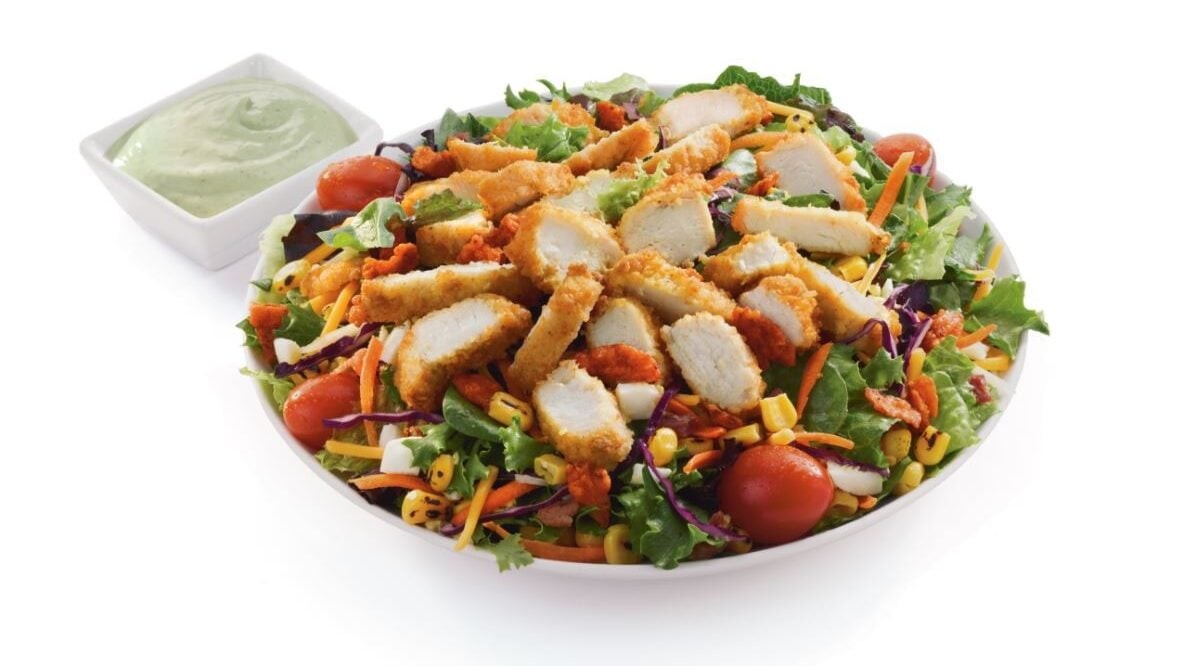 Served with Charred Tomato, Crispy Red Bell Peppers, and a pack of Avocado Lime Ranch Dressing, the Cobb Salad can also be ordered without the nuggets or with a different chicken topping. Other available topping options include fillets and Chick-n-Strips, which can be spicy, grilled, or both. 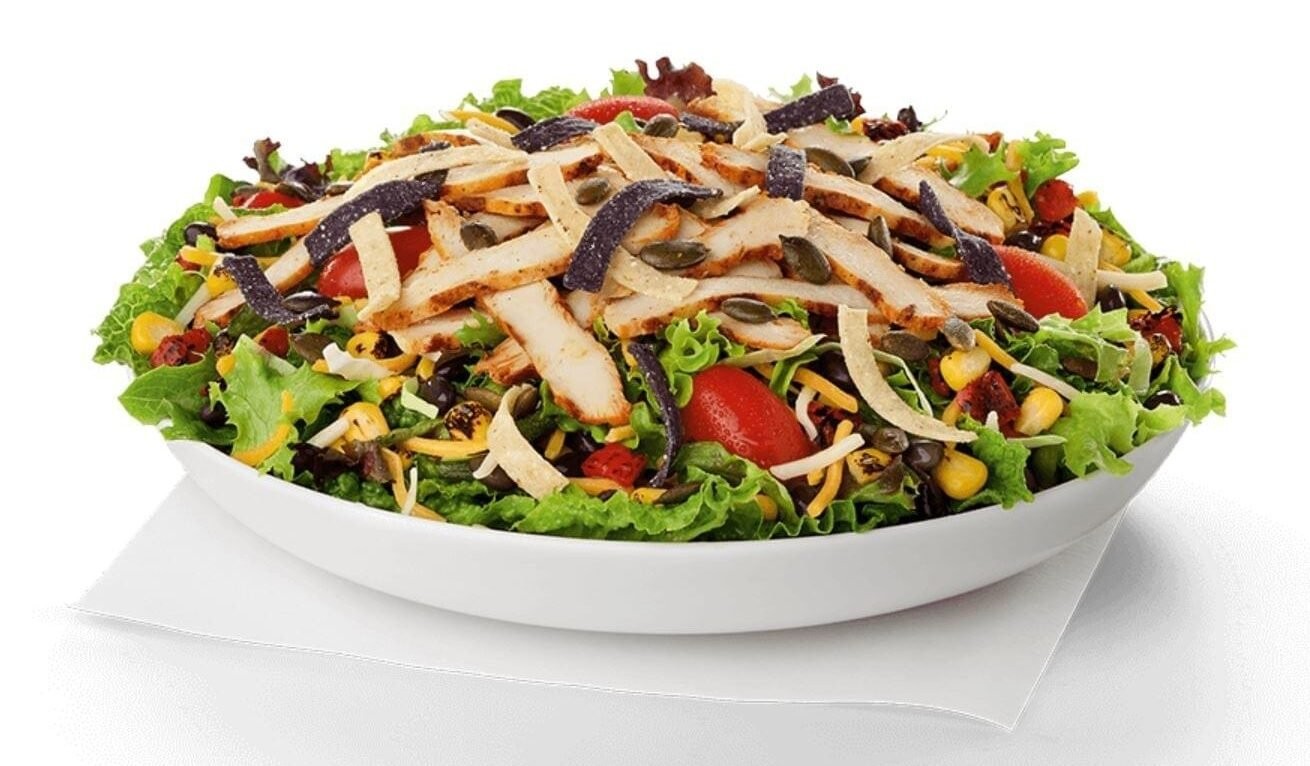 If you’re not a fan of grilled spicy chicken meat, you can order the Spicy Southwest Salad without any chicken or replace the meat component with other available toppings such as nuggets and fillets.

The Market Salad features sliced grilled chicken breast served on a fresh bed of mixed greens, topped with crumbled blue cheese and a mix of red and green apples, strawberries, and blueberries. Served with Harvest Nut Granola and Roasted Almonds, the Market Salad is perfect with Zesty Apple Cider Vinaigrette.

Like the first two salads from the chain, the Market Salad can also be purchased without chicken or with another meat component to replace the grilled chicken breast

How much is a salad from Chick-fil-A?

The prices of salads from Chick-fil-A vary by location. The base price for a Cobb Salad is around $6.75, which could go up to $8.99 when ordered with a chicken topping.

An order of Spicy Southwest Salad without any meat toppings is also $6.75. The cost will increase to roughly $9.19 when purchased with your preferred chicken topping.

When ordered without any chicken, the Market Salad costs around $6.95. Orders of Market Salad with meat components, meanwhile, can cost up to roughly $9.19 each.

If you think an order of salad from Chick-fil-A is a bit pricier compared to an entire meal from other fast-food chains, that is because Chick-fil-A is deliberately distinguishing itself from its rivals by using fresh and quality ingredients.

Can you buy a salad from Chick-fil-A in the morning?

Yes, you can order salads from Chick-fil-A in the morning. In fact, salads are freshly prepared throughout the day at the chain’s 2,800-plus locations across the United States, Canada, and Puerto Rico.

Are salads from Chick-fil-A healthy?

While salads are generally considered good for one’s health, the nutritional value of a salad really depends on every single ingredient it contains. For starters, salads with more meat are less healthy than their meatless counterparts.

Is the Cobb Salad from Chick-fil-A healthy?

Chick-fil-A’s Cobb Salad is too high in fat, calories, and sodium to be considered healthy. Packed with 850 calories, 61 grams of fat, and 34 grams of carbs, the chain’s Cobb Salad is definitely not the type of salad you would like to eat if you’re trying to be healthy or lose weight. However, Cobb Salads, in general, are high in fiber, Vitamin A, and protein. A serving of Cobb Salad from Chick-fil-A contains 42 grams of protein.

Is the Spicy Southwest Salad from Chick-fil-A healthy?

Back in 2019, Kara Lydon, a registered dietitian and licensed nutritionist, told Insider that people who are looking for a balanced meal that incorporates all three essential macronutrients including carbs, protein, and fat, should try Chick-fil-A’s Spicy Southwest Salad. A serving of the salad contains 29 grams of carbs, 49 grams of fat, and 33 grams of protein.

For a well-balanced meal, Lydon recommended pairing the salad with Chick-fil-A’s fruit cup, which contains mandarin oranges, strawberries, red and green apple slices, and blueberries. “This is a salad that’s sure to feel satisfying and satiating,” she said of the Spicy Southwest Salad. “It’s packed with protein from the chicken and beans, contains fats from the cheese and dressing, and has some carbohydrates from the tortilla chips.”

Is the Market Salad from Chick-fil-A healthy?

Chelsey Amer, a registered and certified dietitian nutritionist, told Insider in 2019 that Market Salad is one of the most nutritionally balanced options at Chick-fil-A, thanks to its great combination of greens, fresh fruit, nuts, and grilled chicken. One serving of Chick-fil-A’s Market salad contains 540 calories, 31 grams of fat, 41 grams of carbs, and 28 grams of protein.

Amer, however, made it clear that the salad’s “sodium content is higher than desired for just one meal, so it’s not the best everyday choice.”

Does Chick-fil-A have gluten-free salad?

While all the salad dressings at Chick-fil-A are gluten-free, some of the salad toppings are not gluten-free. Fortunately, you can customize your salad order to make it gluten-free.

For any type of Chick-fil-A salad, ask for a grilled filet or grilled chicken nuggets instead of any breaded chicken options.

The crispy bell peppers that come with the Cobb Salad are not gluten-free, but since these are individually packaged, you can easily opt to leave them out.

The granola in the Market Salad is also not gluten-free. But like the crispy bell peppers in Cobb Salad, this topping is individually packaged, so you can simply set it aside.

The seasoned tortilla strips and chili lime pepitas that come with the Spicy Southwest Salad are gluten-free, so you have nothing to worry about.

Can you buy salad dressing from Chick-fil-A? 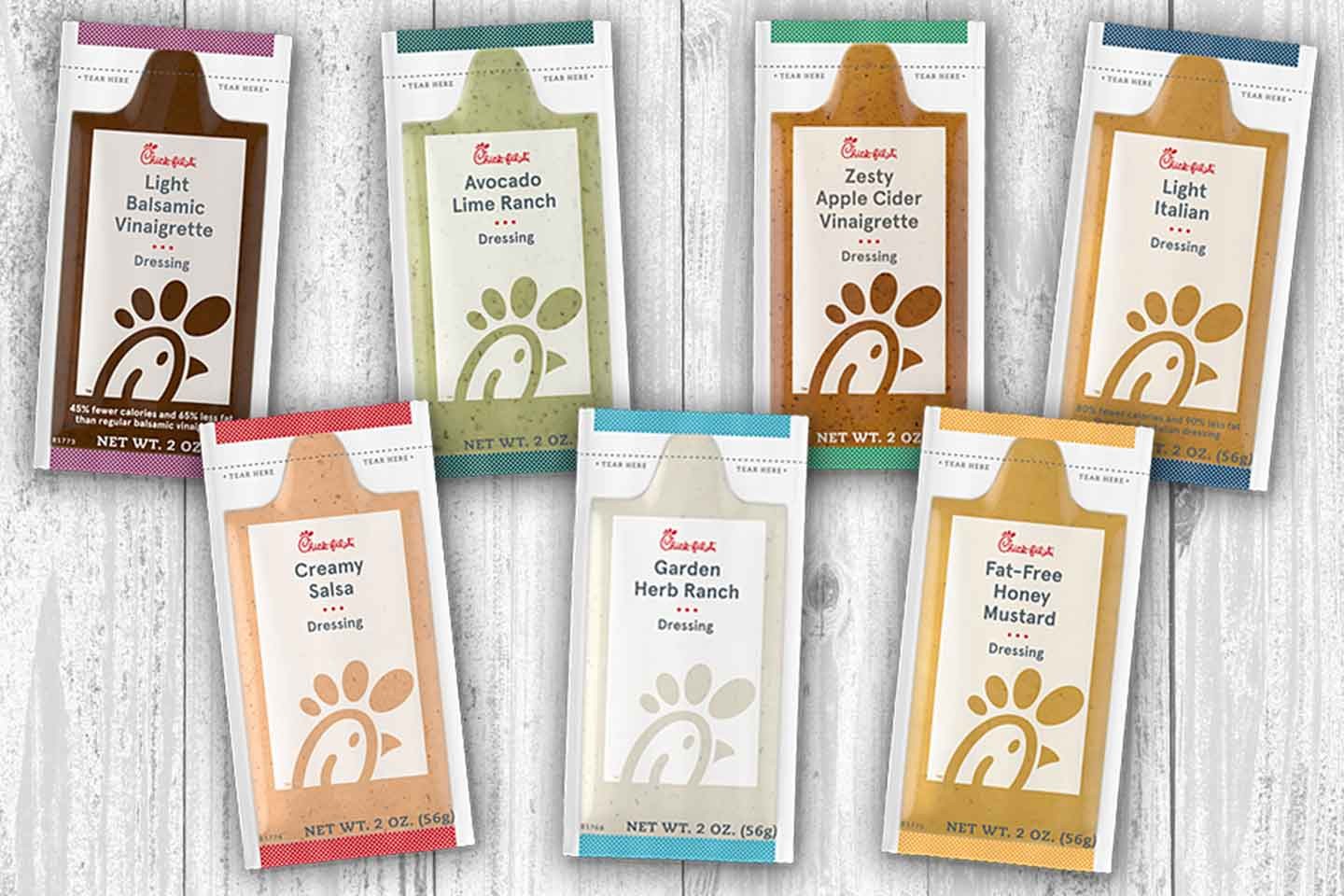 What lettuce does Chick-fil-A use?

While Chick-fil-A’s chefs are allowed to experiment with all kinds of ingredients, David Farmer, Chick-fil-A vice president of menu strategy and development, said in an interview with Business Insider back in 2016 that they banned the use of iceberg lettuce.

“We have a mandate: Never use iceberg lettuce,” Farmer shared. “It’s at the bottom of the salad food chain. There is no nutritional value in iceberg lettuce.”

But according to a post by molecular biologist Sylvie Tremblay on LiveStrong, iceberg lettuce does contain some nutrients like vitamins A and K. However, in comparison to other types of lettuces, iceberg lettuce has lower nutritional value.

In 2018, Chick-fil-A announced that it was testing a new lettuce blend made of romaine, shredded green cabbage, and petite red and green lettuce leaves for its salads.

What is the best salad from Chick-fil-A?

Among the three, however, it appears that most nutrition experts consider the Market Salad as the healthiest.