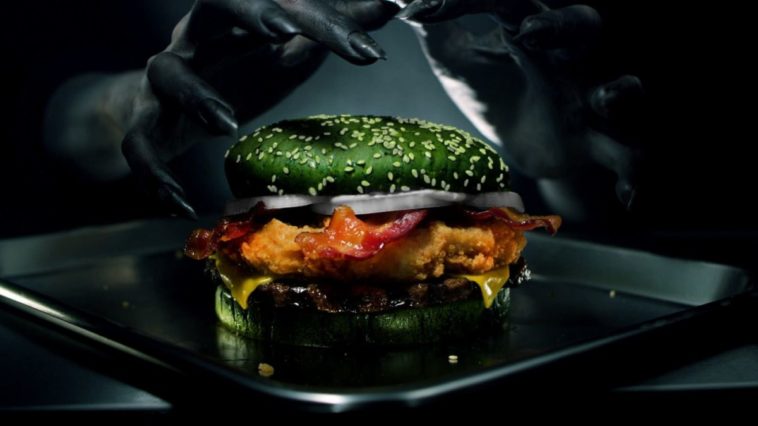 Just in time for Halloween, Burger King is introducing a nightmare-inducing sandwich dubbed the ‘Nightmare King’.

And while the thought of eating a sandwich topped with a green bun is scary enough, BK says the Nightmare King has been scientifically formulated to induce bad dreams.

Yup! We’re not kidding! After creating the sandwich, BK says it worked with a neurological lab to test its effectiveness. As it turns out, according to the lab, BK is on to something!

As claimed by Dr. Jose Gabriel Medina – the study’s lead doctor – participants who ate a Nightmare King before bedtime were 3.5 times more likely to have a nightmare than the control group.

Essentially, this ‘heart-attack-on-a-bun’-style sandwich is a quarter-pound burger topped with a chicken fillet in addition to American cheese, bacon, mayo, and onions. And when pressed about the green bun, BK says its just ‘all natural’ food coloring sourced from watermelons.

When asked to further explain the phenomenon, Dr. Medina chalked it up to a ‘combination of proteins and cheese’, however, if the answer was that simple, wouldn’t every BK burger cause bad dreams?

Some have floated the theory that perhaps Burger King has concocted a secret sauce that’s to blame. But whatever it is, according to Dr. Medina and his research team, it’s working.

Needless to say, this is some spooky stuff. If you want to give it a try yourself, BK plans to offer the sandwich at participating locations for a limited time starting this Monday, October 22nd.

We’ll probably skip this one, but the moment BK introduces its Halloumi King to the U.S., we’ll be all over it!