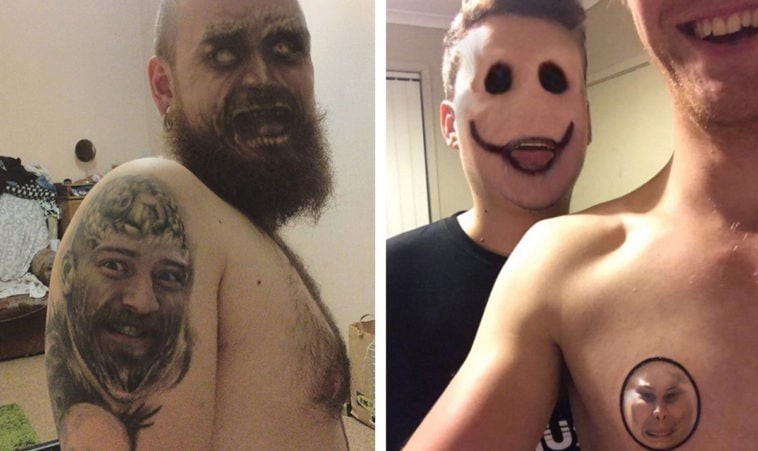 Using a face swap app with your friends and family can result in some of the funniest photos in your phone gallery. But have you ever wondered what it would be like if you used one to switch your face with a tattoo? Surprisingly, a lot of people have already tried doing that, and the results range from weirdly hilarious to deeply terrifying. Click through the slideshow below to see some of Internet’s most unsettling tattoo face swap pics ever.

If this tattoo face swap doesn’t creep you out, then you’ve probably watched so many horror and thriller movies that devilish grins like the one in the pic don’t frighten you anymore. The man in the photo switched his face with a tattoo of Jack Nicholson’s version of the Joker. And as with other incarnations of the iconic DC villain, this one also has a terrifying appearance, which the guy in the photo had successfully recreated.

Illustrations of Hindu gods and goddesses have a distinct style that make them look scary, and this tattoo face swap definitely has that creepy vibe. The man in the photo switched his face with his belly tattoo of the Hindu goddess Kali, and since the deity is usually depicted with her tongue out, the resulting photo is something you wish you didn’t see.

The man in the photo swapped his face with a tattoo on his arms, and the outcome perfectly captures the duality of Gollum and Sméagol from the Lord of the Rings franchise. Like Gollum ― whose appearance was eerily deformed following his obsession with the One Ring ― the man’s tattooed face has the look of someone who has been gravely possessed. His arm tattoo, meanwhile, now depicts a grinning image of his real face, which is reminiscent of Sméagol long before he had been enslaved by the Ring and became the scary Gollum. 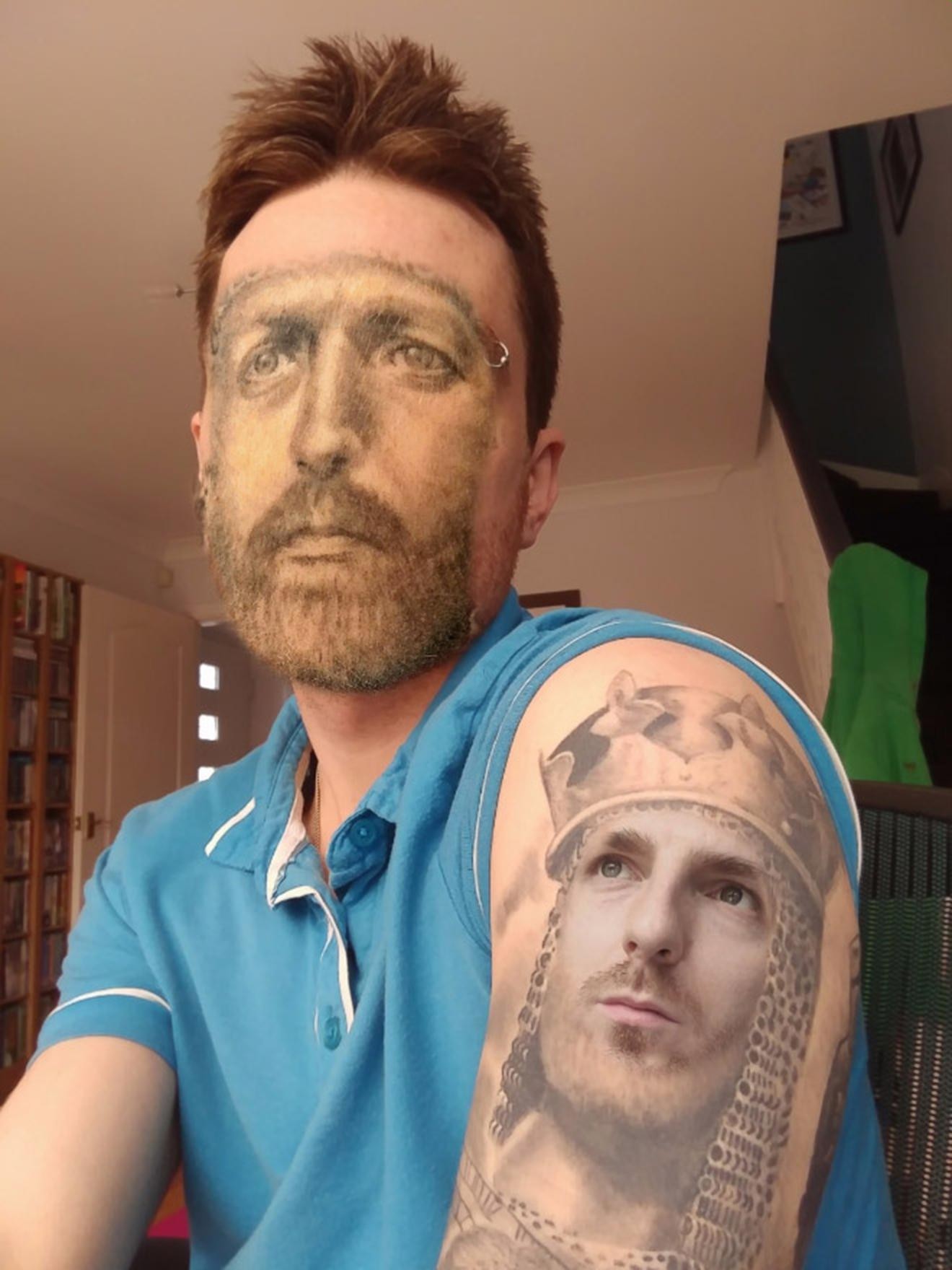 Probably curious about what he would look like as a medieval knight, the man in the picture used a face app swap to switch his face with a tattoo on his arm. While he looks so fine in a mail coif and with a crown on his head, the melancholic King Arthur-like tattoo plastered on his face isn’t something your eyes want to linger on.

Probably wondering what he would look like as Joker, the man in the pic swapped his face with his brother-in-law’s Heath Ledger tattoo. Unfortunately, because of his shaved head, the guy didn’t seem to achieve the appearance he was expecting and just ended up looking like a demon hungry for souls. 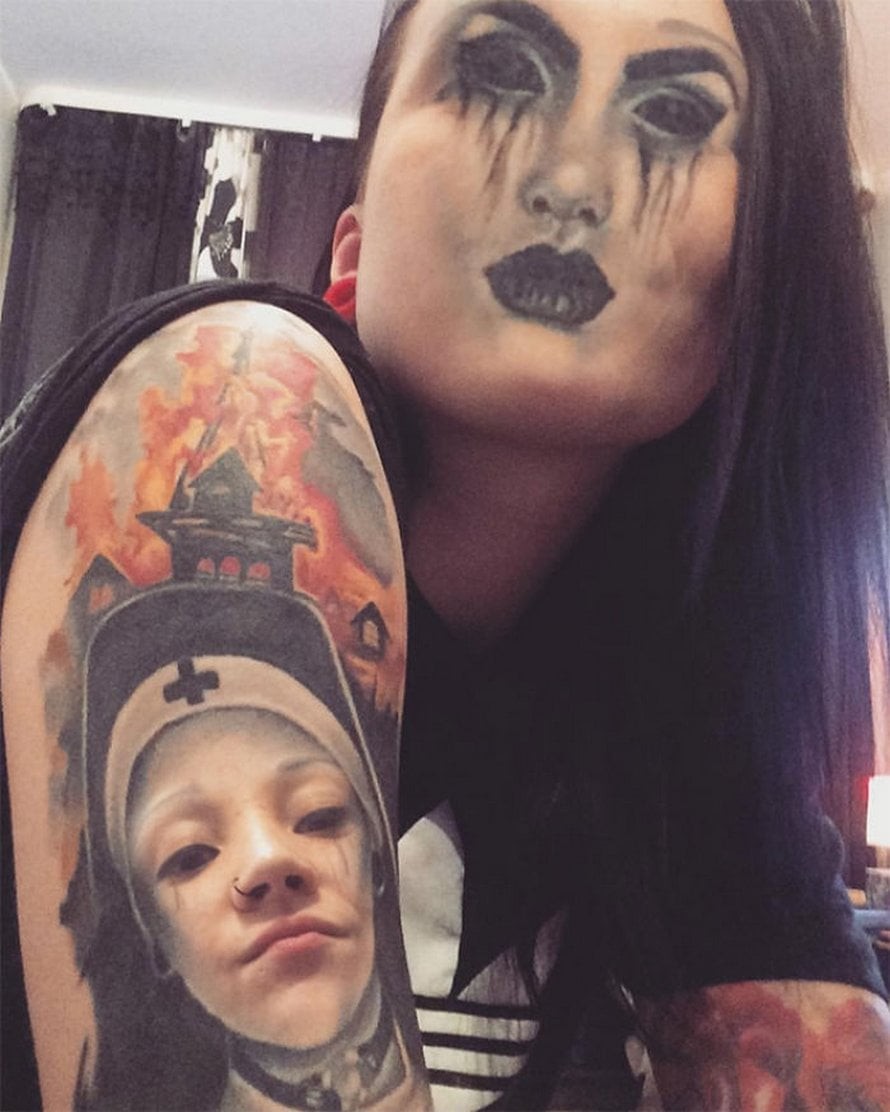 This tattoo face swap was plucked straight from a horror movie. The woman in the pic switched her face with a nun tattoo on her arms, and the result is creepy as hell. With eyes that are entirely black, the woman’s new look is so frightening that even the bravest people won’t dare to look twice. 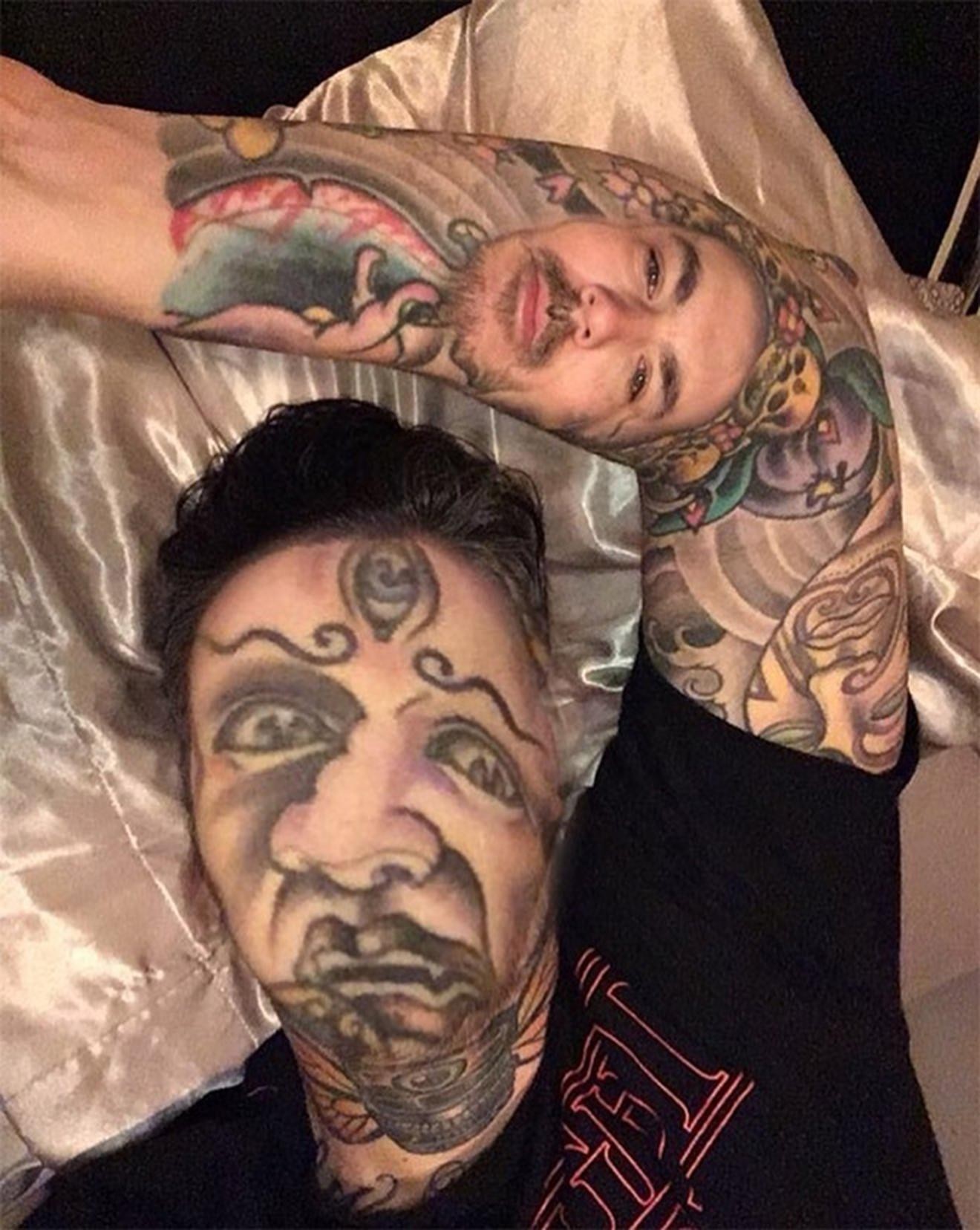 The man in the photo got an instant third eye when he switched his face with a tattoo on his forearm. While his ink now looks hilariously fabulous with his real full-bearded face laid on it, his new face now resembles a crumpled portrait of a terrified man with an extra eye on his forehead.

A hardcore Slipknot fan, Dan Pealing swapped his face with his tattoo of Corey Taylor’s mask from the band’s 2008 album All Hope Is Gone. Since the “screaming” mask was already creepy by itself, laying it seamlessly on someone’s face made it even more terrifying.

Who would ever think that a smiley face tattoo could be this frightening? Shortly after getting a smiley face tattoo on his right chest, the topless man in the pic found out that it works with Snapchat’s face swap. So he tried swapping it with a friend’s face, and the result looks like a two-faced murderous character from a horror thriller.

This tattoo face swap is horrendous and hilarious at the same time. The man in the photo switched his face with a tattoo of Valak on his arm, and while the outcome isn’t as scary as the original demon nun from The Conjuring universe, there are elements that can still give you goosebumps. For instance, Valak’s glowing yellow eyes are still menacing to look at despite being transferred to the man’s face. The arm tattoo, meanwhile, became a funny sight as the man’s fully bearded face doesn’t really suit the nun’s veil. 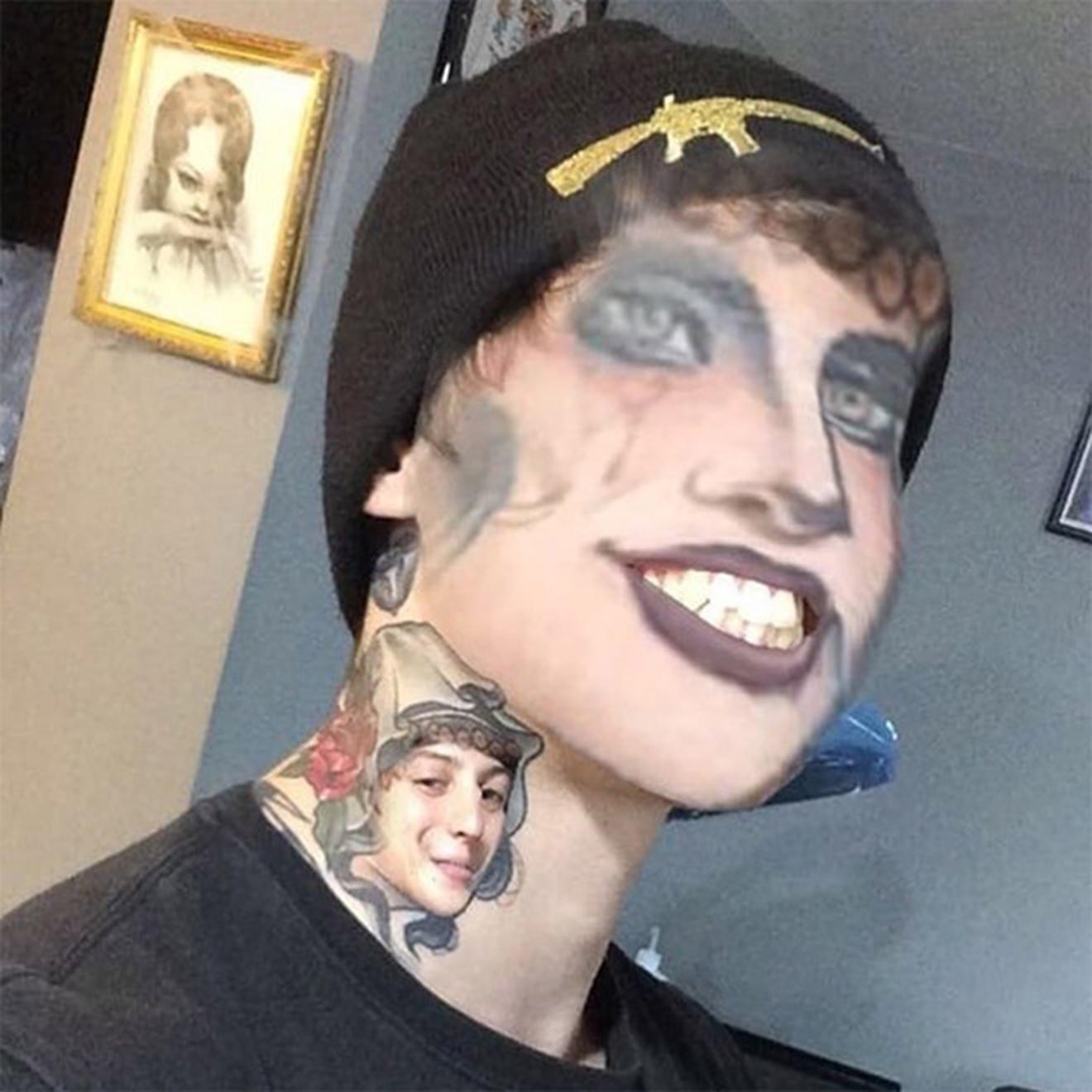 Among all the photos featured in this slideshow, this one is probably the most well-photographed, angle-wise. The man in the photo and the tattoo on his neck are facing the camera in almost the same direction, so when the swap was made, all facial features landed in the right spots. This, however, doesn’t take away the fact it’s still frightening to look at, especially the man’s teeth that ended up merging with the tattoo’s seemingly punk-rock face. 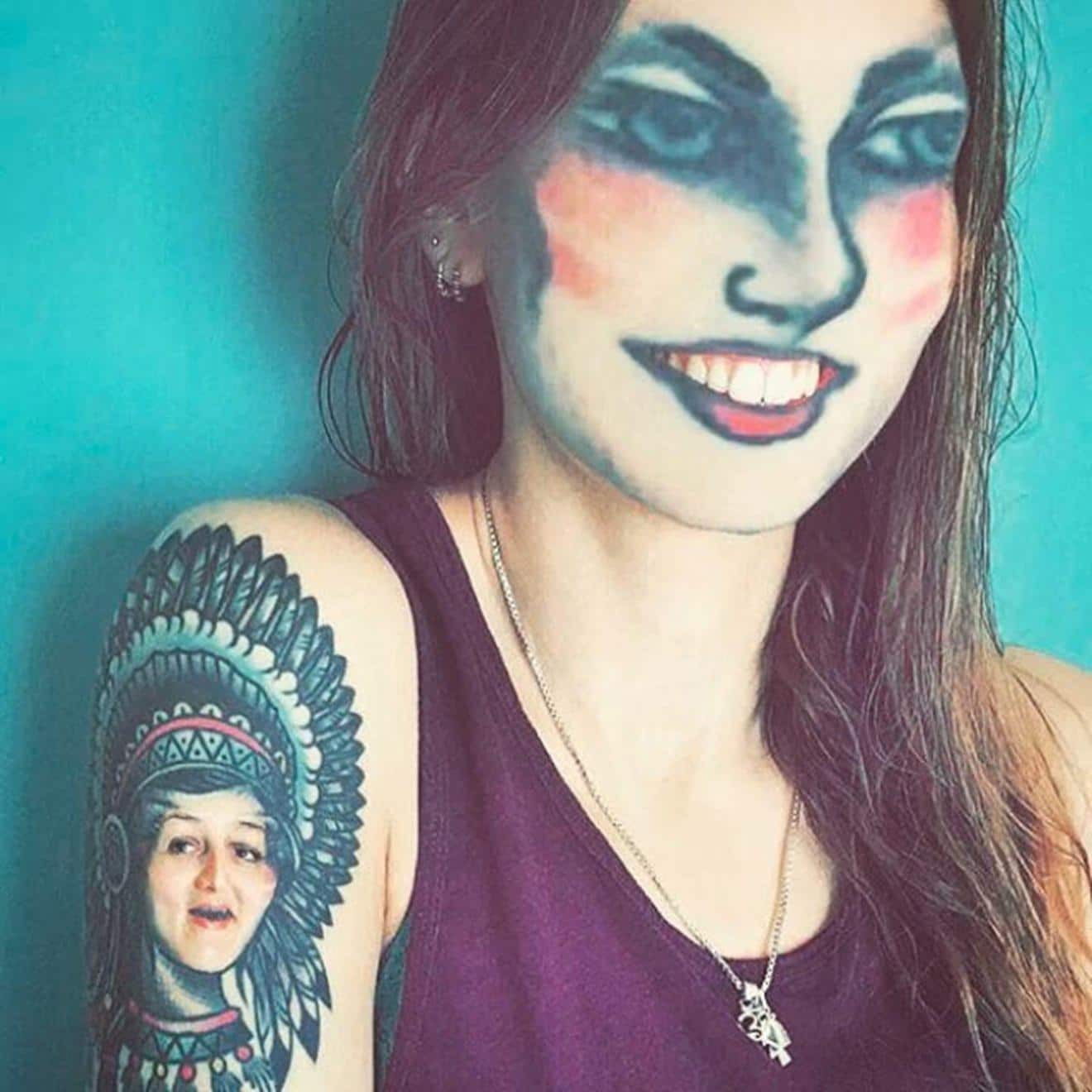 The lady in the picture swapped her face with a tattoo of a Native American woman on her arms. And while the outcome won’t likely evoke an emotional response at first glance, fixing your eyes on the woman’s tattooed face will make you realize that her gaze and smirk are like those of a villain whose evil plans are starting to fall into place.

Wooden marionettes are probably the scariest types of puppets, and this tattoo face swap proves that they could even be more terrifying. The man switched his face with one of his stringed puppet tattoos on his arm, and while the result features a cheery smile, the marionette’s vacant eye sockets give off a spooky vibe.

Due to the popularity of Catholic horror films, a lot of people are afraid of imageries related to the Christian church. And as seen in this photo, that fear can be taken to a whole new level by swapping an image of a Catholic icon ― in this case, a tattoo of Virgin Mary ― with someone’s face. 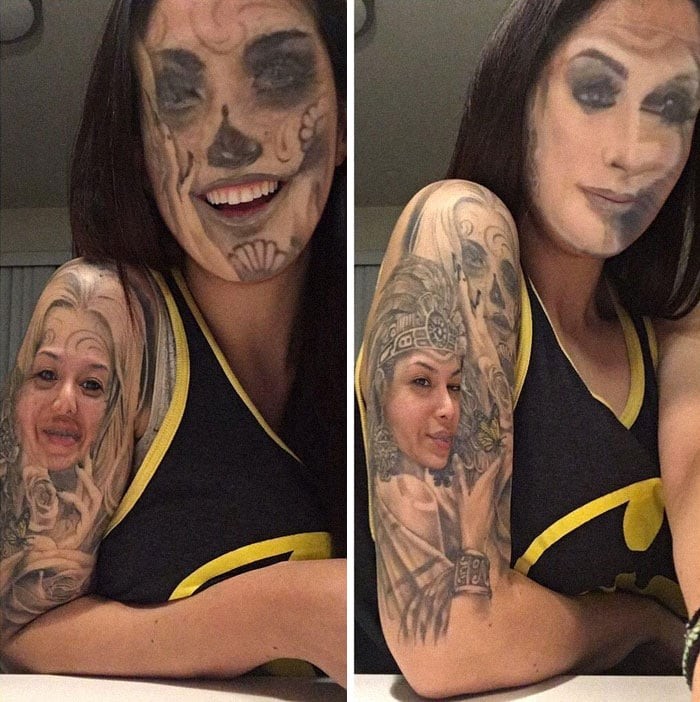 The woman in the photo swapped her face with two of her tattoos on her arms. The original inks were both artistically done, but when they were enlarged as part of the swap, they became smudgy and smeary, making them look a little creepy.

Brian Hugh Warner, aka Marilyn Manson, has donned different looks since he started in the music scene in 1989, and every single one of them freaked people out. So, swapping someone’s face with a tattoo of the rock metal icon is expected to evoke a similar reaction from onlookers. 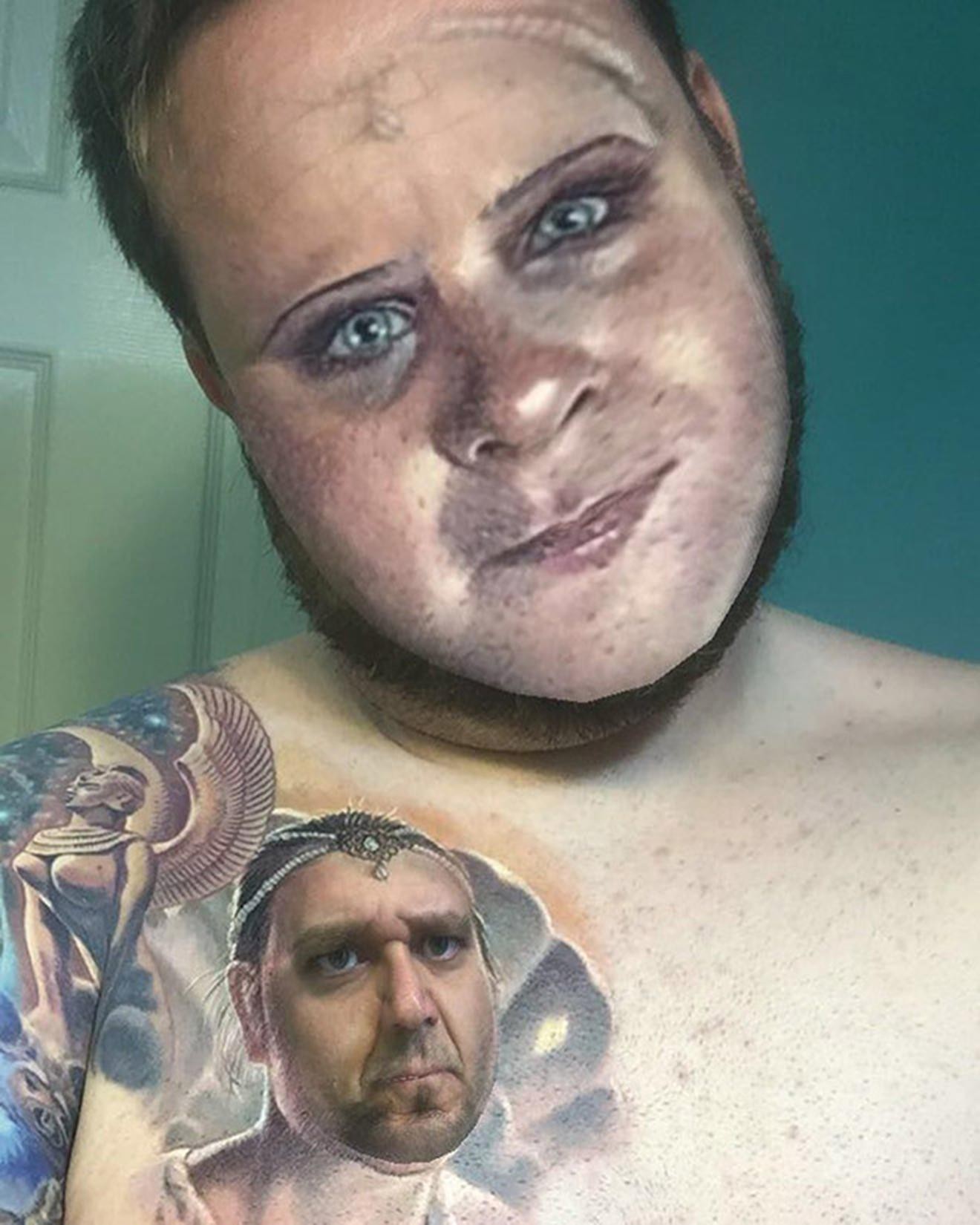 The guy in the photo swapped his face with a tattoo of the Childlike Empress from the film The NeverEnding Story, and the result is scary and funny at the same time. Because of the guy’s bushy facial hair, the supposed youthful appearance of the Childlike Empress became a little creepy to look at. The tattoo, meanwhile, got a hilarious update, as it now features the face of the guy giving a rather judgy stare.

This tattoo face swap looks really hilarious at first glance. But staring at it for a quite some time will make you realize that a tribal face tattoo with a complete row of upper teeth is actually the stuff of nightmares.

The guy with a green cap in the picture got an instant makeover when he swapped his face with his friend’s back tattoo. The unsettling switcheroo gave the guy on fleek eyebrows, curled eyelashes, pouty lips, and rosy cheeks. The originally intense back tattoo, meanwhile, became some sort of a spoof due to the man’s grinning face.

This tattoo face swap seemingly transported the woman in the photo into the world of video game. Some Redditors commented that her new face looks like a Mii avatar from Nintendo video game consoles, while others thought that she now bears resemblance to female PlayStation 1-era characters like Lara Croft

Ever wondered what Mexican painter Frida Kahlo would look like if she had balding hair? Well, wonder no more, because this tattoo face swap gives you a pretty accurate idea. While it’s hilarious at first glance, staring at a face with two-dimensional features will eventually send shivers down your spine.

The woman in the photo was dared by one of her friends to swap her face with her arm tattoo, and based on the hilarious outcome, it seemed that she’s glad that she’d given the challenge a try. The swap made her tattoo look sharper with her beautiful real face pasted on it. And while her tattooed face is blurry, her “I’m so done” facial expression is clear enough to know that it’s pretty funny.

This tattoo face swap reminds us of Ethel Darling, the bearded woman played by Kathy Bates in FX’s American Horror Story: Freak Show. The man in the photo swapped his face with a tattoo of a woman on his arm, and because the switch didn’t include the man’s facial hair on the chin, the outcome is a sultry-looking lady with a thick and bushy beard.

Unlike the others, tattoo face swap isn’t really that creepy. The woman in the photo and a tattoo of an eastern princess on her arms both look beautiful. So, even though it’s weird to see them switch places, the result is more fascinating than alarming.

Corrina Morse swapped his face with a tattoo on her arms, and the result couldn’t be more perfect, color-wise. Seemingly inspired by the Mexican holiday Day of the Dead, Corrina’s tattoo features an image of a woman with red circles around her eyes, red tip of the nose, and red stitched-up lips. And though it’s a little frightening, the tattoo perfectly matches Corrina’s vivid red hair.

The only eerie thing about this tattoo face swap is how perfectly seamless it was made. Despite the poor sharpness of the enlarged tattoo, spectators would probably agree that the switch is so flawless that it looks like a swap never happened. 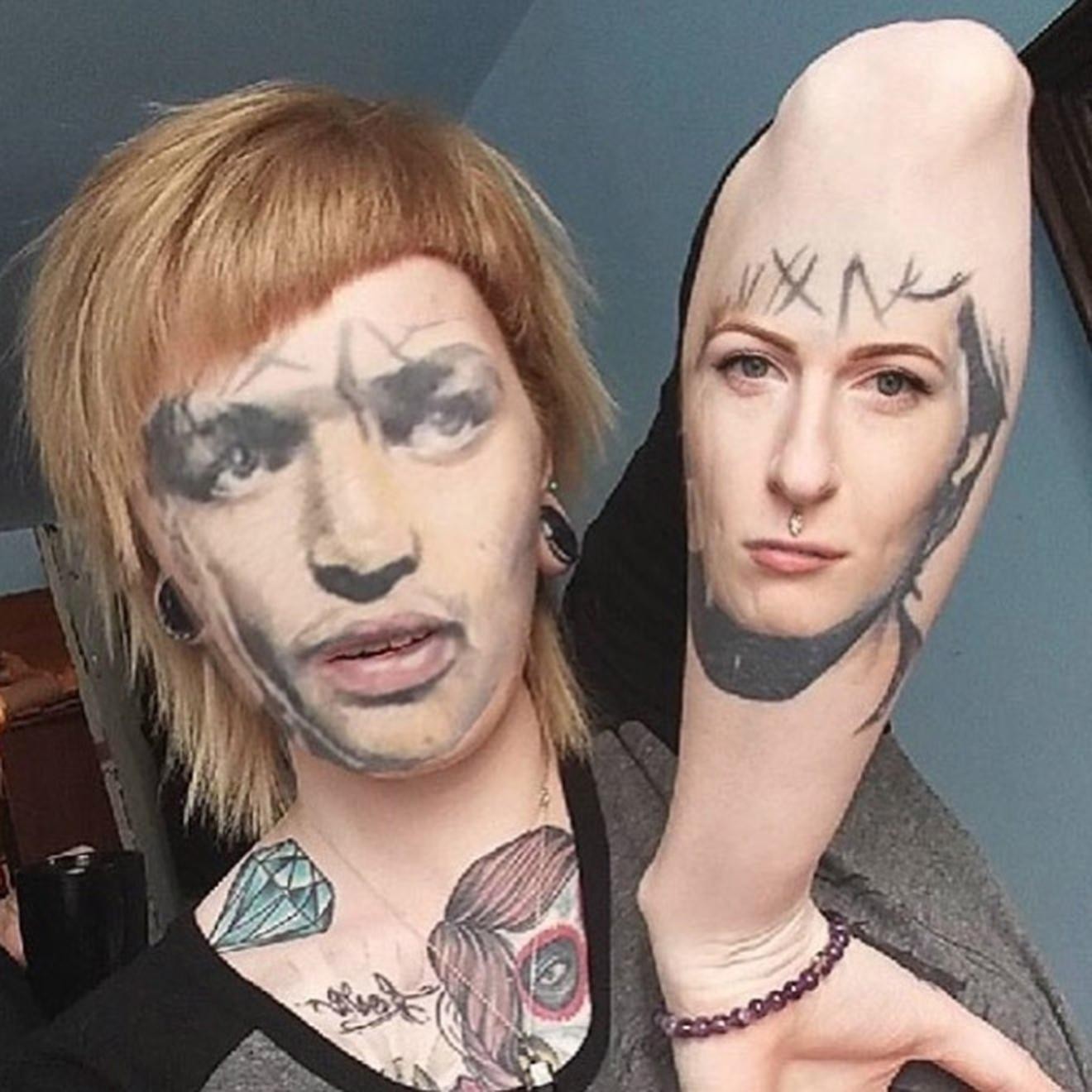 The forearm tattoo of the man in the photo got an instant glow-up when he swapped the ink with his very own face. Now bearing the man’s gorgeous eyes, pointed nose, and tiny lips, the tattoo transformed into a beautiful realistic portrait ― a complete opposite of what happened to his real face after being plastered with a blurry tattoo of a troubled-looking guy. 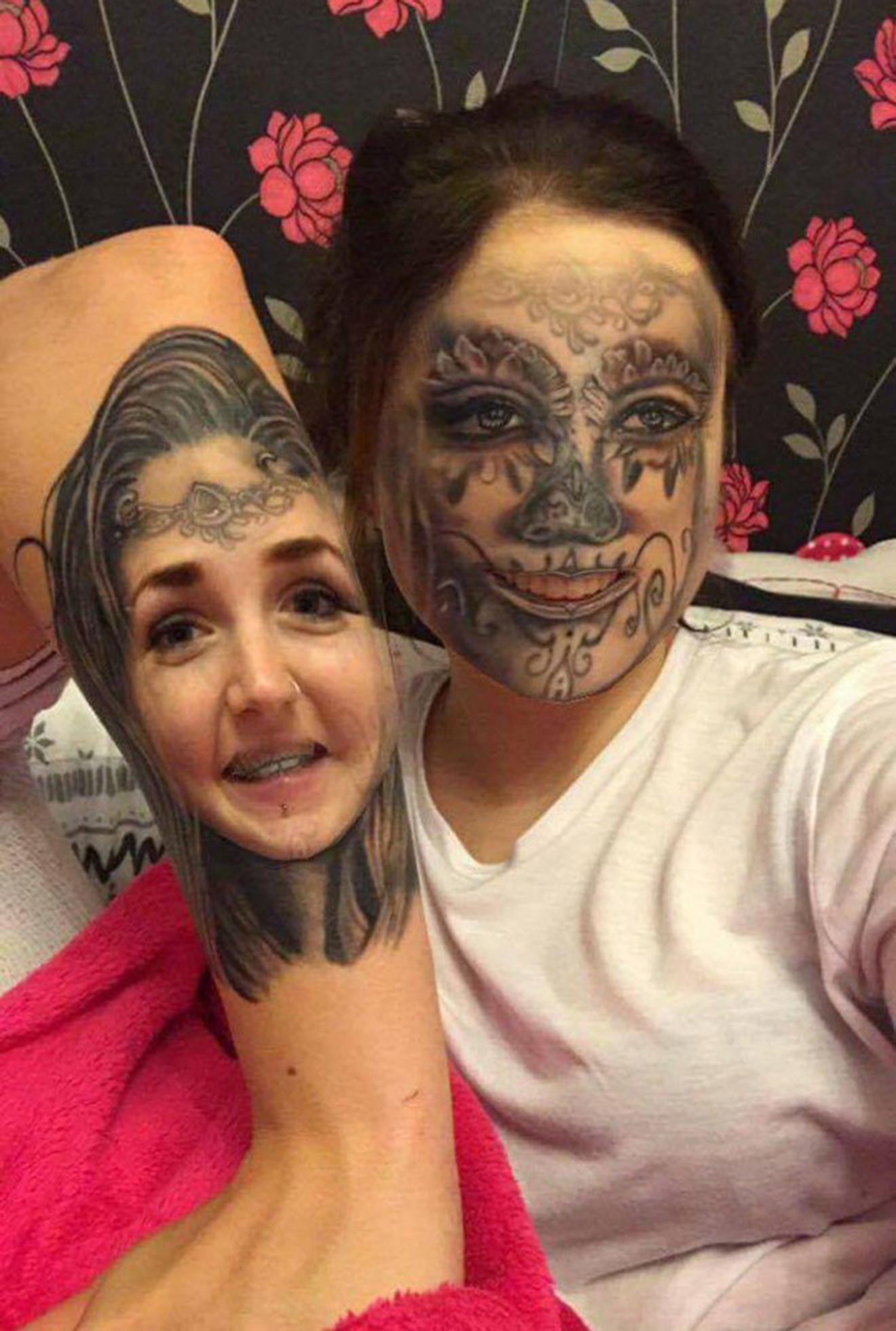 If you’re having a hard time choosing a tattoo or a set of tattoos for your face, then a face swap app can help you discover what kind of style and design would look great on you. For instance, in this surprisingly lovely swap, the woman in the photo is given two options: an intricate forehead tattoo and a full-face tattoo filled with floral and vine-like designs. 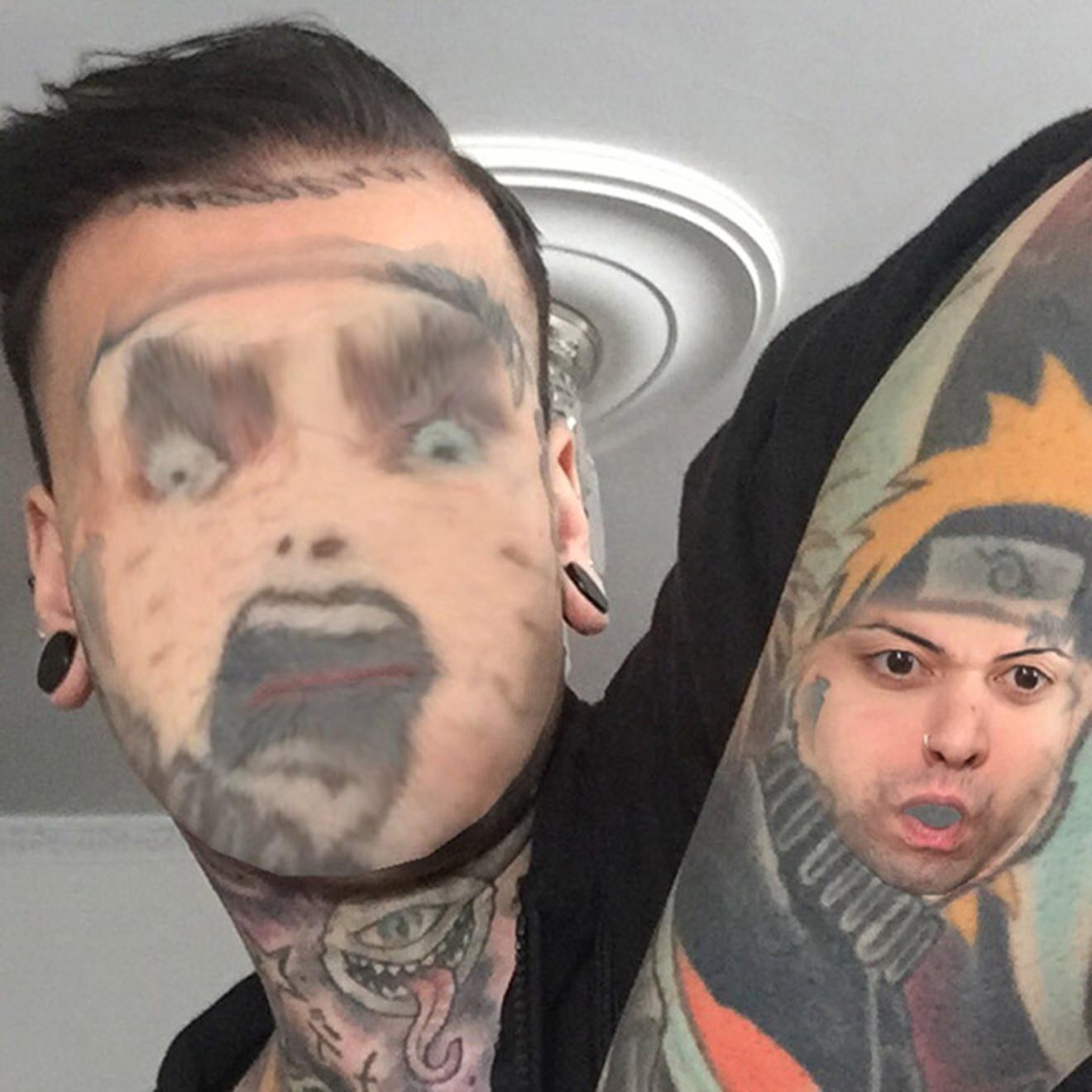 The man in the photo instantly became an anime character when he swapped his face with a tattoo of Naruto Uzumaki on his forearm. While the switch made the man’s face funny and fuzzy, his ink got a little sharper, as it now features his own eyes, nose, and lips.

This tattoo face swap gave the man a shiny gray face with a smudgy eye makeup similar to that of goths. Meanwhile, the tattoo of a woman which the man swapped faces with, became a little funny as it now weirdly bears the face of the man including his bristly mustache.