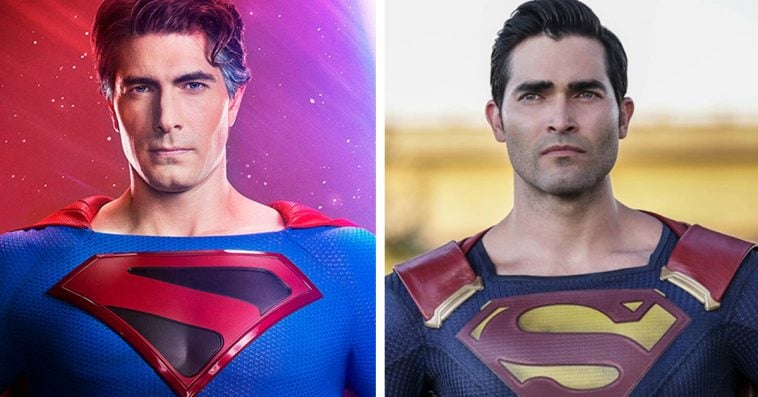 Since production on The CW’s Crisis on Infinite Earths crossover began on September 24th, Arrowverse fans have been treated to a number of behind-the-scenes photos from the set of the much awaited TV event. But one of the most recent pictures that made a lot of fans really go crazy was a photo of Brandon Routh and Tyler Hoechlin together.

Shared by Brandon Routh on Instagram on Tuesday, the behind-the-scenes snapshot shows Routh and Hoechlin posing in their respective Superman costumes while flashing their biggest smiles for the camera. Routh is suited up as Kingdom Come Superman, while Hoechlin is dressed up as Supergirl’s Man of Steel.

In the caption, Routh — who will also appear as Legends of Tomorrow’s Ray Palmer in the five-part crossover — jokes about “double vision” being the Man of Steel’s newest ability. But in a serious note, Routh expresses how grateful he is to appear in the crossover alongside his fellow Superman actor Hoechlin.

#DoubleVision—the new #Superman ability! 😉 Grateful to share the #Arrowverse as #Superman for a short time with the charming & gracious @tylerhoechlin! I never really thought I’d get to meet #Superman in person… Gotta say, it’s all it’s cracked up to be! 👏🏻😎 #crisisoninfiniteearths @dccomics @thecw @warnerbrostv #SupermanTeamUp 📷: @redheadtattoos

But Routh and Hoechlin aren’t the only Superman actors who will appear in the crossover. As The CW announced last month, Tom Welling will also reprise his Smallville role in the TV event. As a matter of fact, just this Monday, Arrowverse’s Lois Lane actress Elizabeth Tulloch shared a photo of herself with Welling and Hoechlin on the set of the crossover. “Lois and Clarks,” the actress cleverly captioned the image, along with a heart emoji.