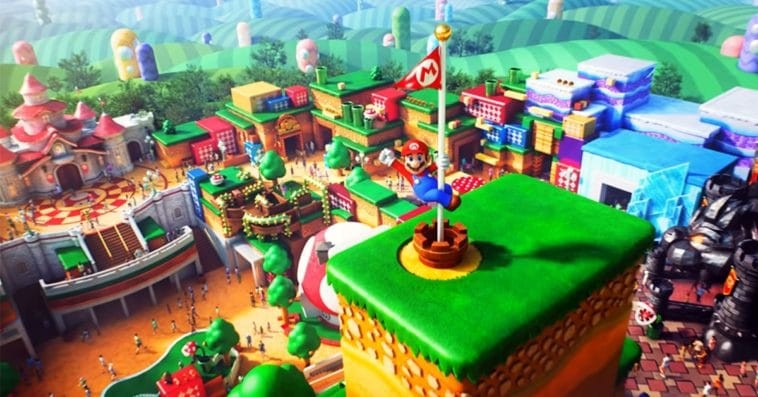 A new video taken from Super Nintendo World, which is currently being constructed at Universal Studios Japan, is making the rounds on social media. And though it’s only 16-second long, the clip is more than enough to get lots of Mario fans more excited about the land’s upcoming opening in Osaka.

The short video shows a crane that is seemingly dangling a chunk of Mario platform in the air. The cartoony, mountain-like platform features three cloud lifts positioned on top of one another. Moving left to right and right to left, these lifts apparently serve as one of the ways for guests to reach the iconic Mario goal pole.

Though it appears that the platform isn’t 100 percent done yet, several Mario fans are already amazed by it, with many of them expressing their desire to visit Universal Studios Japan once the Super Nintendo World opens.

I want to jump on it, to get to the top pic.twitter.com/djb9Aqk9yi

Some critical fans, however, are questioning the design, durability, and the overall build of the platform. A couple of fans think the platform looks cheap while others are concerned on whether the materials used are weather-resistant.

I think one more segment to the platforms would’ve hidden it very well, I wonder why they’d rather leave it uncovered though. I don’t know how friendly weather will be to the structure inside either, because the tops seem to all be exposed

“Think of Super Nintendo World as a life-size, living video game where you become one of the characters. You’re not just playing the game; you’re living the game, you’re living the adventure,” said Coup in a statement. “Nintendo’s most iconic locations and experiences will be brought to life, including Mushroom Kingdom, Peach’s Castle, an incredible Mario Kart ride, Bowser’s Castle – and more.”

According to Universal Parks & Resorts chairman and CEO Tom Williams, Japan’s Super Nintendo World will have two rides ready to go from day one: the Super Mario Kart ride and the omnimover attraction called Yoshi’s Adventures. It’s not clear, however, whether these attractions will also be featured in other versions of the land.