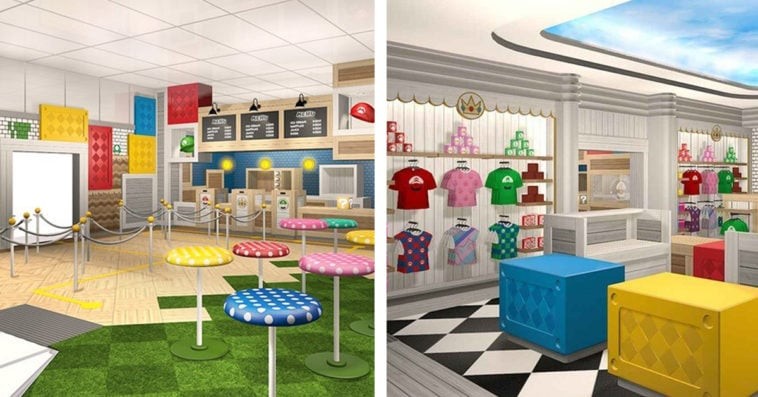 Though Super Nintendo World at Universal Studios Japan won’t open until early 2021, Mario fans can get a taste of the highly-anticipated theme park area starting next week with the opening of the world’s first-ever Mario Café & Store.

Located in the Hollywood area of Universal Studios Japan in Osaka, Mario Café & Store will open its doors for the first time on October 16th and will feature exclusive themed food and merchandise in an immersive and authentic atmosphere.

Based on 3D model images shared by Nintendo and Universal Studios, the exterior of the café and store features oversized Mario and Luigi hat sculptures, as well as the iconic red and green color scheme from the beloved video game franchise.

The interior of the café has multi-colored checkered floors, tables with vibrant polka-dot designs, and walls decorated with images of question mark blocks, brick blocks, warp pipes, Piranha Plants, Koopa shells, and different power-ups seen from the game. The interior of the store has the same wall design but boasts a checkered floor based on the iconic Mario Kart racing flags and a luminous sky ceiling.

Nintendo and Universal Studios also released images of some of the food and drinks that will be available at the café, and they all look irresistible. Included in the menu are pancake sandwiches inspired by Mario and Luigi’s hats, as well as fruit cream sodas served in plastic cups with “mustache” straws. Customers can also order any beverage from the menu and drink it inside a Super Mushroom Souvenir Bottle.

As mentioned above, the store will offer merchandise with original Universal Studios Japan designs that feature Mario, Luigi, and Princess Peach. Souvenir and gift items that will be available at the shop include t-shirts, pouches, pillows, smartphone cases, key chains, and more. Take a look at the store’s Whose Cap? collection in the images below: