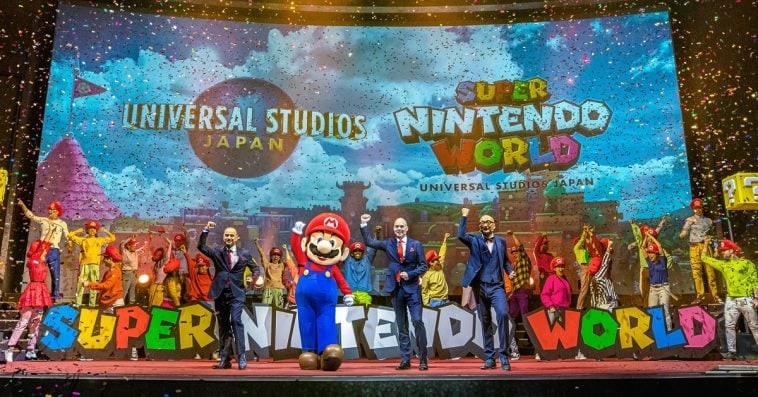 Super Nintendo World will be taking its guests inside their favorite video games when it opens at Universal Studios Japan in Osaka this summer.

During the global kick-off presentation event for the new theme park area on Tuesday, Thierry Coup — senior vice president and chief creative officer of Universal Creative — revealed that they have developed a state-of-the-art, Mario-themed wearable wristband called Power Up Band, and a specially designed mobile app that will make visitors feel like they are truly part of the Mushroom Kingdom.

The Power Up Band will allow guests to have interactive experiences, making use of their arms, hands and entire bodies as they explore the new area. For instance, while wearing the band, guests can hit a real-life Question Block and collect coins — just like Mario does in the video game. Earned coins can then be exchanged for collectible items, such as character stamps.

“Think of Super Nintendo World as a life-size, living video game where you become one of the characters. You’re not just playing the game; you’re living the game, you’re living the adventure,” Coup said. “The Power Up Band will connect guests with dozens of iconic Nintendo items throughout the land in a truly seamless and innovative way – and the app will keep track of their adventures and any coins, stamps or other iconic elements they earn along the way. There will be opportunities to advance through achievements, keep score, compete against each other and celebrate together when you win. I think the seamless integration of the gameplay is one of the most innovative experiences we have ever created at Universal Studios.”

Themed to different characters in the video game, Power Up Bands can be purchased in Super Nintendo World, while the accompanying app can be downloaded from Google Play Store and the App Store.

The Power Up Bands and the app are featured in the newly-released music video for We Are Born to Play — the official Super Nintendo World song created as collaboration between internationally-known dance music duo, Galantis and global pop superstar Charli XCX.

No new attraction at the theme park area was announced during the kick-off presentation event, but Universal Parks & Resorts chairman and CEO Tom Williams previously revealed at Comcast’s 2019 Media, Communications & Entertainment Conference last September that Super Nintendo World will have two rides ready to go from day one: the Super Mario Kart ride and the omnimover attraction called Yoshi’s Adventures.